The Golden Globes weekend of parties kicked off Thursday night with a trio celebrating - naturally - fashion. 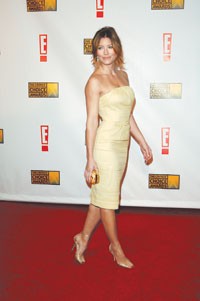 The Golden Globes weekend of parties kicked off Thursday night with a trio celebrating — naturally — fashion. On Rodeo Drive, David Yurman feted the opening of his Yabu Pushelberg-designed West Coast flagship with Hilary Duff and Amber Valletta, who admitted she’d stopped by the day before to “play with jewelry,” and that night, had her eye on a large green opal couture ring with tsvarite. Perhaps she wanted it to wear with her short black Chanel frock, chosen in honor of the splashy dinner the French fashion house was throwing at Chateau Marmont an hour later. The parlor’s sofa and chairs were cleared out to make way for two long tables that each sat 40, including the likes of hostess Sienna Miller, Cameron Diaz, Dustin Hoffman, Lindsay Lohan, Harvey Weinstein, Kate Bosworth, Evangeline Lilly, Rachel Bilson and Jaime King.

“You know, we may not remember this night,” Hoffman joked to Diaz before sitting down to dinner. Miller, however, couldn’t sit still for long, popping out onto the patio every few minutes. “Sorry, I am just dying for a cigarette,” she said impishly. Her admiring dinner partners Johnny Lee Miller and Jack Huston didn’t seem to mind. But Chanel didn’t get all the starlets — another bevy, including Ali Larter, Rebecca Gayheart, Shiva Rose and Monet Mazur, were on hand at Sunset Tower for W magazine’s “A Hollywood Affair.”

At Louis Vuitton’s Rodeo Drive boutique the next day, Irena Medavoy hosted a luncheon where Wendi Murdoch, Cheryl Tiegs, Melanie Ellison, Liane Weintraub and 30 other ladies nibbled on chef Ludovic Lefebvre‘s dover sole and sipped Krug Champagne as the spring collection made its American debut. “You know, I used to be a Cristal girl, but I have a new favorite,” purred Medavoy.

This story first appeared in the January 16, 2007 issue of WWD. Subscribe Today.

Later that night, the Broadcast Film Critics paid homage to their favorites at the Critics Choice Awards at the Santa Monica Civic Auditorium. Wrapped in Chanel, Rinko Kikuchi used a translator to answer reporters’ questions in Japanese. However, when asked who her favorite designers are, she quickly replied, “Karl Lagerfeld, Balenciaga, Comme Des Garçons. So many.” She cited “sleep” as her prep routine. Christian Slater, sporting Dolce & Gabbana, teasingly followed suit, giving the press a rundown of his pre-awards regimen: “Curlers. Push-ups. Sit-ups. The whole deal.”

On Saturday night, while Aussies like Naomi Watts and Isla Fischer partied away at Penfold’s Australia Week Gala, the rest of Hollywood was at either Irena and Mike Medavoys‘, the Chateau Marmont, or the ultraexclusive bash Sting threw at the Hollywood burlesque club 40 Deuce.

Medavoy, who switched from a cashmere suit to a little black dress and boots, rang in the Russian New Year at her and her husband’s Beverly Park estate. “Who the heck are all these people?” asked Sarah Paulson. She must not have looked hard enough, because among the crowd were Leonardo DiCaprio, the Trumps (Donald and Melania), Heidi Klum and Seal, Georgina Chapman, Vanessa Getty and Sheryl Crow. Along with shots of vodka and piles of Beluga caviar, guests were treated to a performance by Russian dancers, followed by a very loud (and barefoot) Dennis Quaid and the Sharks. “I’m just waiting for the DJ to come back on,” mouthed Liane Weintraub over the din.

But that was nothing compared to the noise once again emanating from the Chateau Marmont, where Kelly Clarkson‘s “Since U Been Gone” blasted as Ginnifer Goodwin, Anna Paquin and Mary-Kate and Ashley Olsen mingled at HBO head Colin Callender‘s annual pre-Globes party. June Newton, Helmut’s widow, took refuge in the restaurant with Eva Chow, while PYTs like Joy Bryant and Gia Coppola partied in the garden. Meanwhile, Globes nominee Helen Mirren was being fawned over by friends and fans alike for her performance in “The Queen.” “It is my weekend, isn’t it?” she said grandly.