Martha Stewart takes notice of Carlo Ponti at the Russian National Orchestra bash and Edward Norton muses at the "After the Dust" opening. 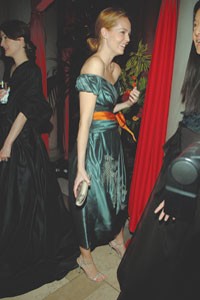 NEW YORK — Theme parties always bring out the best and worst in fashion, and both were duly represented at the Frick Collection’s Young Fellows Ball, “Tango and Tapas,” Thursday night. While some showed up looking like Spanish widows in mourning or flamboyant toreadors, others, like honorary chairmen Marina Rust, Lauren duPont, Aerin Lauder and Nathalie Kaplan, arrived wearing elegant frocks by the evening’s co-sponsor, Vera Wang. Some in the crowd, which included Eleanor Ylvisaker, Alex Kramer and Lisa Airan found themselves taking an ad hoc approach, though. “I was looking for this leather Alaïa jacket but I couldn’t find it. So I just said, forget it,” joked Nina Griscom, explaining the denim jacket she chose to top her beaded Badgley Mischka gown. One of the prettiest dresses went practically unnoticed as event chair Victoria Traina, in a golden Vera Wang gown, popped inside to get her picture snapped before quickly departing to study for midterms, according to a friend. Everyone else found themselves leaving earlier than expected, too, perhaps because the champagne ran dry well before midnight.

Downtown, at the “Ask the Dust” screening at the Tribeca Grand hosted by The Cinema Society and sponsored by Piaget, thespians like Clive Owen, Edward Norton, Lindsay Lohan and Jonathan Rhys Meyers turned up to see the Salma Hayek/Colin Farrell vehicle. “Robert Towne, L.A. in the Forties, how can you miss?” mused Norton. Not to mention the sight of ex-girlfriend Hayek in some very steamy nude scenes with Farrell. Hayek was flitting around and looked about as thrilled to be talking about the scenes as she had been doing them. “It was hard,” she admitted.

An event more tailored for children was Memorial Sloan-Kettering’s annual Bunny Hop at FAO Schwarz, sponsored by Ralph Lauren, on Tuesday night. Little boys wearing ties fought each other with balloon swords, and girls in tartan party dresses, all hopped up on sugar went whizzing about. Heather Mnuchin followed her daughter Emma around. “She’s probably the only kid here wearing Sears,” she laughed, amused by her daughter’s outlandish ensemble. Near the race cars, Harrison Grauso seemed to have caught the fashion bug, too. He had just returned from the collections in Paris. “He’s picking up the business,” mother Anne said slyly. Indeed, he was energetically collecting coin donations.

Just a hop, skip and a jump away, Bergdorf Goodman had lit up its fifth floor like a purple glow stick for the reopening of its contemporary department, suitably cohosted by the New Museum of Contemporary Art. Music thumped through the space as guests including Tory Burch, Princess Elisabeth von Thurn und Taxis and Amanda Brooks packed themselves in among the clothes. Nearby at the St. Regis Hotel, Martha Stewart was waxing poetic about the Russian National Orchestra, which had its 15th anniversary. “The clarity of the instrumentation, the unusual choices of piece,” she said. “And the conductor is very sexy. Have you seen him?” Stewart asked with a nudge. Said conductor, Carlo Ponti Jr., was sitting nearby with his mother, Sophia Loren. And he was happy to accept the compliment. “If Martha says it, it must be true,” he offered.

Earlier that afternoon, the restaurant Daniel was transformed into a boudoir when Bettina Zilkha and Lucy Sykes-Rellie hosted a luncheon for Parisienne lingerie designer Chantal Thomass. Susan Fales-Hill, Tiffany Dubin and Serena Boardman hungrily eyed the mannequins decked in Thomass’ underthings for Victoria’s Secret. Some couldn’t wait until after lunch to sample the goods. Jackie Astier pulled a lacy bra out of her goody bag and tried it on over her blouse, to the delight of her tablemates.

Thomass, who had just flown in from L.A., where she was outfitting famed client Dita Von Teese, seemed bemused by the goings-on. But not as much as by L.A. women. “Their chests are so beeg!” she said. “They’re all D-cups!”