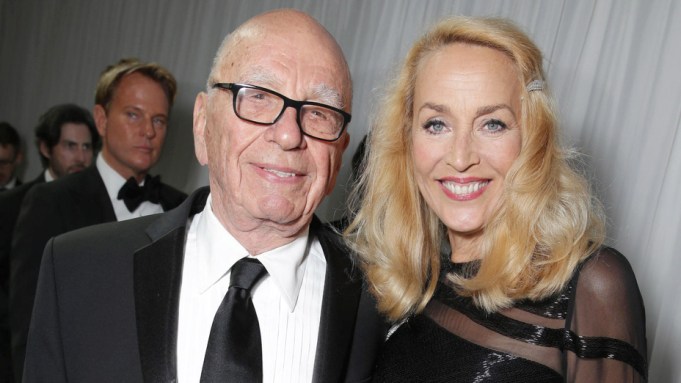 DECK THE HALL: Britain is set to have a new royal family — far more glamorous than the real one — when Jerry Hall marries Rupert Murdoch after he proposed in Los Angeles during the Golden Globes. It will be Hall’s first marriage and Murdoch’s fourth, following his recent divorce from Wendy Deng. Hall was the longtime partner of Mick Jagger — she spent more than two decades with him, and they have four children — but their beach wedding in Bali in 1990 was never legally binding.

Fittingly, the couple announced their engagement in Murdoch’s British flagship publication The Times of London as part of the births, marriages and deaths column. The simple statement said: “Mr. Rupert Murdoch, father of Prudence, Elisabeth, Lachlan, James, Grace and Chloe Murdoch, and Miss Jerry Hall, mother of Elizabeth, James, Georgia and Gabriel Jagger, are delighted to announce their engagement.”

The couple has been together for less than a year, and were first seen in public in October at Twickenham Stadium during the Rugby World Cup. One thing is for sure: Murdoch, the multibillionaire media tycoon and Hall, the Texan model, actress and socialite whose past loves include Bryan Ferry, and most recently the scientist Armand Leroi, will never be out of the headlines.