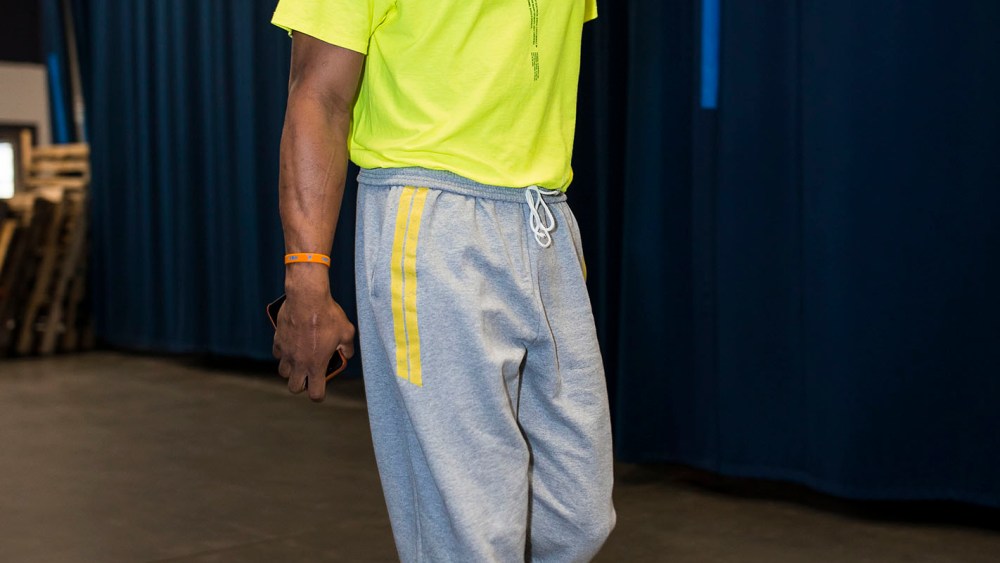 Russell Westbrook knows he has a gift, and this weekend, he’ll share that gift with the world.

That’s when the NBA star and style setter will finally take the wraps off his long-awaited inaugural apparel collection. Called Honor the Gift, the collection will be unveiled at a pop-up at Penn Automotive in Oklahoma City, Okla., from 2 to 6 p.m. on Nov. 11 and 12. It will then be offered for sale to everyone else on an Honor the Gift web site beginning at 10 a.m. EST on Nov. 21.

Westbrook, a point guard for the Oklahoma City Thunder and the reigning NBA Most Valuable Player, is keeping most of the details about the line under wraps at this point, but he told WWD it will be a small capsule of affordable unisex streetwear.

Rumors of Westbrook’s apparel collection have been bubbling for months and the player actually wore a couple of pieces from the upcoming collection to the Thunder’s season opener late last month. Coming into the arena, Westbrook was photographed in a bright yellow T-shirt with a graphic element running down the center and a pair of gray sweatpants with asymmetric stripes below the knee and the same bright yellow accent running from the waistband to midthigh.

“Yes, I wore a couple of pieces,” Westbrook acknowledged.

He said Honor the Gift is his motto and celebrates God for the gift that he’s been given. “I’m blessed,” he said.

The initial offering will be around eight to 10 pieces, he said, and will be for both men and women. Prices will be within reach of most of his fans, he said.

Westbrook said he worked on the design and theme of the pop-up at Penn Automotive, a body shop at 2104 NW 39th Street, that he deemed “a cool spot.”

He said that he may host pop-ups in other cities around the country, but that hasn’t been decided.

The e-commerce site, honorthegift.co, will launch with a look book shot by fashion photographer Kenneth Cappello.

Westbrook wouldn’t say where the line is being manufactured or by whom. “I do a lot of things and have helped a lot of people in fashion,” he said, “so I’ve got a lot of relationships and was able to get the clothes done at a quick pace.”

What he did confirm, however, is that he is personally bankrolling the brand and is serving as the founder, creative director and chief designer. But he worked with a graphic designer and another apparel-industry veteran to create the line. “I don’t know how to draw or be a graphic designer,” he said, “but I had a vision of what I wanted to see.”

Westbrook is hoping the line will connect with his fans and followers, but he’s also not expecting to give up his day job.

“I’m going to take it one day at a time,” he said. “I’m doing it for the community and the culture, not to make huge revenue off of it. Fashion is something I love to do and this will have my fingerprint on it.”

Westbrook has become well-known for his off-the-court style, working with brands as varied as True Religion, Nike’s Jordan brand and Tim Coppens with whom he collaborated on a capsule collection for Barneys New York last year. Rizzoli also released his new book, “Style Drivers,” last month.