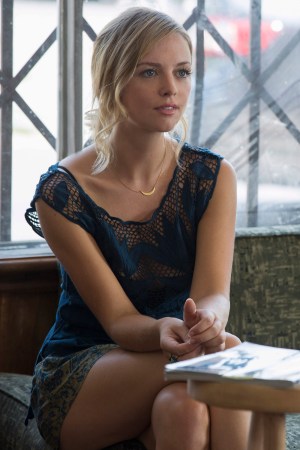 “I’d always been told ‘Arrested Development’ was this brilliant show, but truthfully I’d never watched it,” says 27-year-old Irish actress Ruth Kearney. Nevermind that — she caught up quickly after being cast in Will Arnett’s upcoming series for Netflix, “Flaked,” out Friday. The eight-episode series is the latest program from the streaming service, after the success of  “House of Cards” and “Orange is the New Black,” and more recently, “Master of None,” “Making a Murderer” and “Love.” And with her new Netflix association, Kearney made sure she was familiar with Arnett’s past work. “When I got the job,” she says, on the phone from L.A., hours ahead of the show’s premiere party, “I completely binge-watched [Arrested Development].”

Kearney was born in London to an Irish family, who relocated back to Dublin when she was five. She grew up playing dress-up with her sisters, along the way discovering a natural liking for performance. “My sisters used to put on plays and make little films when we were away on holidays,” she says. “I always really enjoyed performing — I didn’t know exactly what I wanted to do, but I felt that if I could do something like that it would be really amazing.” Luckily her family was sympathetic to the acting bug. “My mum was actually really into acting when she was younger, and my grandmother on my dad’s side had been into acting,” she says. “So it’s definitely in the family, but no one had gone at it in the professional sense.”

She moved to the U.K. to attend Bristol Old Vic Theatre School, which has trained the likes of Daniel Day-Lewis, Naomie Harris, Jeremy Irons and Patrick Stewart. “It’s such competition, so you’re just really grateful to be there,” she says. “It was my first time living away from home, I guess, as I went to university in Dublin and still stayed at my family house.”

Soon after graduating, she landed a role on the ITV show “Primeval” for two seasons. “Since I went straight into TV, that’s kind of the path I continued on, even though my training was all theater,” she says. She’d been working in New York through March 2015 on FOX’s “The Following,” and returned to London, “but the interest was coming from the States,” she says. “Flaked” was one of her first auditions in L.A.

“Doing the eight episodes, it was almost like we were shooting an indie film, as opposed to what I was used to doing on a TV series,” she says of “Flaked.” “We had the whole arc, whereas often in TV the concept can change.”

The arc for her character, London, is not all the evident when the pilot wraps. “She kind of shows up, she’s the new girl in town, but everything you know about her is from what other people are saying,” Kearney says of London. “It’s people’s descriptions of her, and what you’ve heard — and I think that’s what I find interesting, is that air of mystery.”

London is a waitress at a local bar in Venice who catches the eye of both Arnett’s character Chip and his best friend Dennis. “Is she just this girl? Is she just this waitress and she’s going to be this love interest? Is she going to be the catalyst that breaks up this bromance?” Kearney says. “But as the series goes on, there’s actually more to her than you realize — she’s got her own s–t going on, her own things she’s dealing with, and slowly as the story progresses and she gets to know the guys better, things start to unravel and the truth comes out. She’s got quite a big part to play.”

Playing the part of London was itself quite the departure for Kearney. “The character I played before London was on the show “The Following,” and she was a serial killer,” she says. “So ‘Flaked’ was obviously far more relatable than, like, stabbing people.”