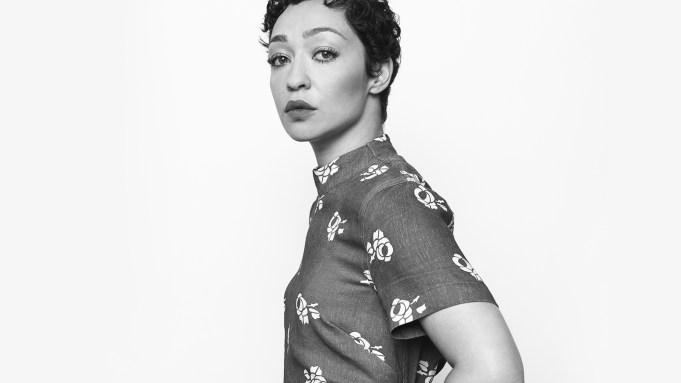 Season 2 of AMC’s absurdist series “Preacher” opens with a classic summer trope: a road trip. And Ruth Negga is in the front seat.

The Ethiopian-Irish actress — who experienced a breakout year since the show premiered last spring, best actress Oscar nomination and all — has returned to her tough-girl Tulip O’Hare role, one of the show’s leads.

“She’s hoping to be back on the road now — the dusty highway full of adventure, up to no good,” Negga explains of her character’s entry into the new season, which premieres June 25. “I think that there is something inside her that realizes that it might not work out as planned.” The show, which is based on the DC comic book series, is centered on small town Texas preacher Jesse Custer, and his quest to find God with Tulip, his longtime friend and love interest, and an Irish vampire named Cassidy. Naturally, it’s no easy task.

The actress does have an easy rapport with her two main costars, Dominic Cooper and Joe Gilgun. “We like each other. That helps,” she says of the trio’s dynamic. “We’re very supportive of one another. We are the main three, and we work long hours, and we very much care about the characters and each other. I think that support and kindness generally bleeds into our daily routine. We’re very collaborative, and I think that is just something that happens instinctively and organically.” Cooper plays Jesse, her onscreen love interest; the two actors are also involved offscreen and have appeared in several projects together including last summer’s “Warcraft” and the National Theare’s live 2009 production of”Phèdre.” Negga admits that familiarity lends itself to a working relationship. “You get to know how they work. It’s like any collaboration. The more you collaborate, the more it works, and it just becomes a sort of comfort.”

In season two, Tulip and Jesse continue the ebb-and-flow of their relationship’s dynamic. “I think that they are best friends, and they have been best friends since childhood. You know, they have this motto, ‘Until the end of the world,'” Negga says. “I truly believe that they think they are soul mates, and I think they are the only people in the world that really understand one another. And I think there is a sort of strangeness in their needs, and I think that all anyone really wants in life is to have people understand us for who we actually are, despite everything.”

Despite its over-the-top violence and fantasy elements, the premise of the darkly comedic “Preacher” (Seth Rogen and Evan Goldberg are producers/directors) is rooted in ideas around spirituality and the interplay of good and evil.

“To be honest, just our existence on this planet means that we all have souls, so how much we engage in it or not…I mean, I try to,” Negga muses, reflecting on her own approach to the metaphysical. “It’s about taking time to nourish ourselves, the planet and one another. It’s simply about being kind to one another. That is spirituality from my point of view.”

Although she’s been racking up roles for years, Negga was catapulted to wider fame with her leading role in “Loving,” which was lauded as one of the most provocative films of 2016. As for where that buzz will lead her next, Negga is letting the universe guide.

“I haven’t really decided. I’m not really a big planner,” she says. “I try to concentrate my energies on what I’m doing at any particular time, which I think is wise.”