The annual party honored Jeff Koons who is doing an installation for RxArt in Chicago to be completed next year. 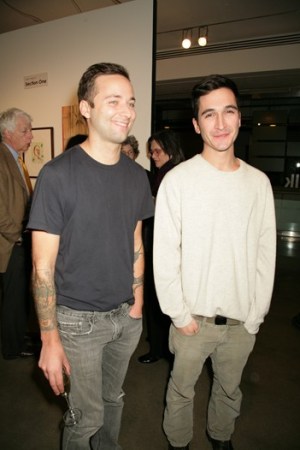 RxArt, the organization that promotes the therapeutic side of contemporary art by connecting renowned artists with doctor’s offices, clinics and hospitals, celebrated with its annual party on Tuesday night.

The bash honored Jeff Koons—though in absentia, since he wasn’t there—but the artist is doing an installation for RxArt in Chicago to be completed next year.

The artists and dealers who were in attendance could probably use a little healing themselves, considering the lackluster results of the recent art auctions. But despite the economic climate, the guests were in cheery moods (outwardly at least) as they crowded into Milk Gallery, where pieces from the likes of Richard Prince, Ed Ruscha and Lawrence Weiner were offered as part of a silent auction to benefit RxArt.

Some guests, like Helen Schifter and Allison Kanders, were on a mission.

“I’m going to shop till I drop,” said Kanders, while Schifter was looking to decorate her new apartment. “I did research on everything before I came,” said the ever-savvy shopper.

And though they were off-duty, gallerists Barbara Wilhelm Dwek and Amy Greenspon offered buying advice to friends. Others barely had a chance to peruse the offerings.

“I’ve moved from there to here since I got here,” said co-host Lazaro Hernandez, who was so besieged by friends that he hadn’t even made it three yards into the party in nearly an hour.

Same with Victoria Traina, who came with her sister, Vanessa. “I haven’t had a chance to look at the art yet,” she bemoaned.

Meanwhile, artist Rita Ackermann mingled, admirably unconcerned with how her piece was faring in the auction (it sold well, while some it-boys like Nate Lowman and Terrence Koh got nary a bid).

Afterwards, Hernandez and fellow host Jack McCollough piled into a cab with friends to head to an impromptu dinner at Mercer Kitchen.