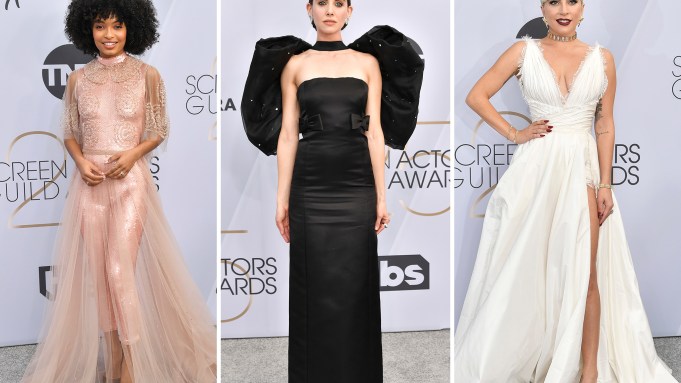 The SAG Awards on Sunday night in Los Angeles started off a bit glamour-challenged, with a silver foil, rather than a red carpet, courtesy of sponsor Reynolds Wrap, and a live-streamed preshow with a host who confessed to Alec Baldwin that he bought his shoes at DSW. But all was forgotten as soon as stars started to arrive in their designer and couture best.

Spring came early to the — ahem — silver carpet (it was 75 degrees and sunny in L.A.) with a fresh romance to many of the best looks, starting with Lady Gaga’s showstopping ivory fringed taffeta ensemble, straight off Maria Grazia Chiuri’s circus-themed Dior spring couture runway, with a high-leg slit that she worked like a champ, and a Tiffany & Co. diamond choker adding a rock-star edge.

Yara Shahidi, wearing Fendi couture, was also feeling the lighter mood in a blush-pink tulle dress over sequined pants ensemble. “Yara loves to have a good time and that’s what she always leads with,” her stylist Jason Bolden told WWD. “We had our classic chat about what she was thinking and she said, ‘I want to have fun!’”

The biggest fashion news was the high-profile return of Marchesa to the red carpet, worn by Sofia Hublitz, who was nominated in the TV ensemble cast category for “Ozark.” (Molly Sims first wore the label, codesigned by Georgina Chapman, the ex-wife of Harvey Weinstein, at the Golden Globes earlier this month.) The consensus, at least on social media, was that it’s time to let Chapman and her fashion label move on. Certainly, the gown, dripping with champagne-colored beading, with a skinny red belt to match Hublitz’s ruby lips, was an elegant standout all its own.

The cast of “Crazy Rich Asians” made its awards season swan song, appearing together for the last time, since the film was shut out of the Oscars. They made a chic group, from Michelle Yeoh in a silver-embroidered Elie Saab gown with feathery skirt, to Constance Wu in beaded silver Oscar de la Renta with a Harry Winston upper arm cuff; Henry Golding in a gold jacquard Tom Ford cocktail jacket, and emerging fashion plate Gemma Chan pretty in a pink, one-shoulder Oscar de la Renta gown with petal-cut skirt and train.

Other men’s wear looks worth noting? Chris Pine doing his best Gatsby in a white double-breasted tuxedo by Ermenegildo Zegna, Chadwick Boseman in a Zegna leaf-patterned jacquard evening jacket (and some major diamond lapel pins), and Michael B. Jordan trying out the Virgil Abloh for Louis Vuitton harness tuxedo look (the harness in a springy floral print to match the evening’s romantic mood, natch).

Styled by Danielle Nachmani, fashion girl-in-the-making Laura Harrier of “BlacKkklansman” was also a pink lady, wearing a custom fuchsia organza gown with balloon sleeves by Loewe’s Jonathan Anderson that managed to look red carpet-romantic but modern at the same time. And Amy Adams went with a strapless black peplum gown with high slit by Celine’s Hedi Slimane, even if it looked more classic than his rock ‘n’ roll sensibility.

But the most dramatic of all the black gowns was the Miu MIu look worn by “Glow” star Alison Brie. Festooned with a giant bow like angel wings on the back, it took some finessing to get into, she admitted during the pre-show: “I believe I’m partially sewn in…I’m flashing forward to later in the evening when I’ll be saying to my husband, ‘Just get it off!’”