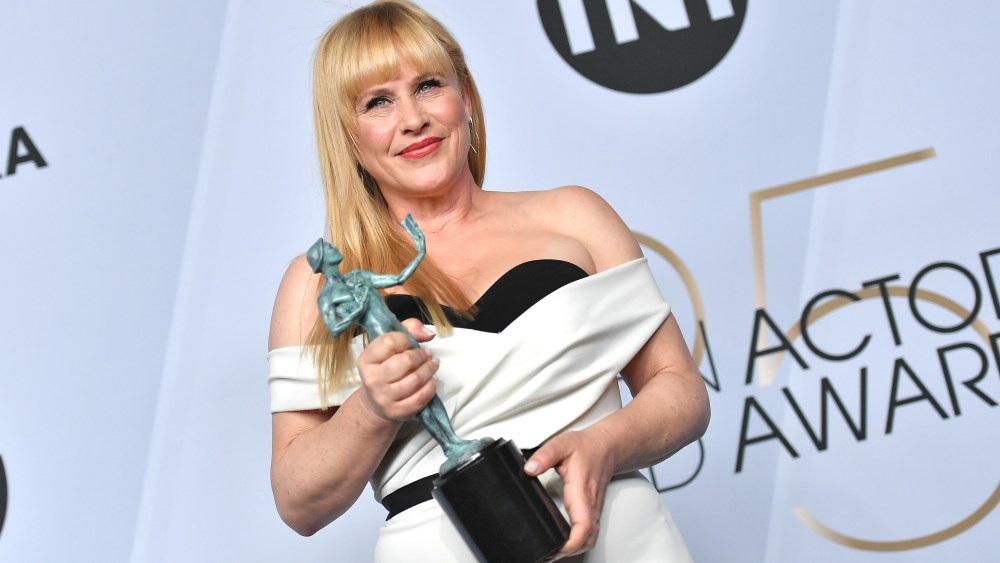 As a nod to the 25th “silver” anniversary of the Screen Actors Guild Awards, a silver carpet was rolled out at the Shrine Auditorium in Los Angeles to welcome the most recognized actors of the season.

“It means so much to me,” Arquette said an hour before being named Best Female Actor in a TV Movie or Limited Series. “I’m a fourth-generation actor and these are my peers. They’re very discerning when it comes to acting, so I’m very grateful,” she said of the awards, which are voted on by the 150,000 members of the guild.

Taking a moment to acknowledge her Christian Siriano gown, Arquette continued saying, “It’s bringing consciousness to the carpet.” The “Escape From Dannemora” actress explained that she worked with RAD, a new initiative started by costume designer Arianne Phillips to turn the red carpet into a charity platform, by having designers donate to a star’s favorite cause. “They partner different actors or celebrities who want to highlight a charity group they’re working with. In this case, it’s my charity GiveLove. We improve sanitation in the developing world and protect water resources. We build bathrooms in schools all around the world. I’m so grateful to partner with these incredible designers for this really important project.”

Rachel Bloom, who arrived fresh from dance rehearsal for “Crazy Ex-Girlfriend,” also had giving back on her mind.

“I’m here representing the SAG-AFTRA Foundation,” she said, acknowledging the organization that provides assistance to members of the guild, and children’s literacy programs to the public, relying solely on grants and donations, including from the evening’s sponsors. “I like that a lot of the money from this award show goes to the foundation. It’s not just an award show for the sake of an award show, it actually goes to helping working actors.”

Before making it, Bloom was quite familiar with the concept. “I was eligible after a Sierra Mist voiceover commercial that never went to air,” she noted. “[But] I avoided joining because to join SAG, unless you get assistance, it’s thousands of dollars. I put it off until one day I booked a Dunkin’ Donuts commercial and I got a call saying, ‘You need to join SAG right now otherwise they won’t let you join this commercial because you’ve been eligible for like four or five years.’ I had to call my mom and ask her for money.”

Although the circumstances were different, another starlet that needed parental assistance was “The Americans” nominee Holly Taylor.

And for nominee Julia Garner receiving her SAG card was a moment of confirmation. “I remember I was like, ‘I’m official. I’m in the union.’ I was as excited as I am today.”

On being recognized for her work in “Ozark” the actress noted, “The category and the women that are nominated with me, it feels like a win to me. When I first got the news, I could not believe it. I still can’t.”

That sense of excitement continued throughout the afternoon as the carpet emptied and the auditorium began to fill.

“We have so much fun at this one,” said Betty Gilpin of “Glow.”  “It’s the most low-key party of all of them. You’re at a table with your peers and it feels a little more relaxed.”