Aymeline Valade’s versatility as a model served her well in her first acting role as Betty Catroux in Bertrand Bonello’s “Saint Laurent.” 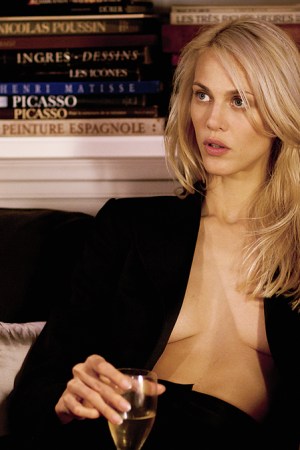 Aymeline Valade was sitting outside the Fashion Institute of Technology in New York on a recent afternoon. Though she’s walked for some of the biggest designers in the world, no one recognized her.

In her customary head-to-toe black uniform, she could have passed for a student. As a model, Valade’s signature is her versatility, her unique ability to disappear into the character she’s supposed to channel for any given designer. She can go from fierce punk to blond femme fatale to a vision from the 18th century at Chanel’s Métiers d’Art show in New York earlier this month.

“Fashion is fantasy,” she says. She had just walked through the “Yves Saint Laurent + Halston: Fashioning the ’70s” exhibit and was still overwhelmed with the sheer imagination of the clothes. “Every day, in five minutes, you can be transported. You have to switch very quickly from one character to the other.”

It’s a skill that served her well in her first role as an actress. At 30, Valade has made a specialty out of grand entrances in her career as a model, but they all pale in comparison to the first time she appears as Betty Catroux in Bertrand Bonello’s “Saint Laurent.”

She’s sitting across from the designer in a crowded dance club and he can’t take his eyes off her. She looks to be “appareled in celestial light,” to borrow a line from William Wordsworth. Luminous, blond and smoking a Gauloises, she is the very embodiment of Parisian cool. When she starts dancing with complete abandon to a cover of Screamin’ Jay Hawkins’ “I Put a Spell on You,” Saint Laurent looks floored. So was the audience at the New York Film Festival in September.

Much like when Jean Seberg first screamed out “New York Herald Tribune!” in “Breathless,” the club scene in “Saint Laurent” was one of those moments when everyone had the same thought: Who was that?

The real Catroux approves, too: “The first encounter with Yves picking me up in a night club is the exact truth,” she writes from Paris. “[Valade] shows perfectly well the relationship I had with Yves, which was magical.”

Bonello’s “Saint Laurent,” which opens in the U.S. on May 8, has run circles around its rival, the Pierre Bergé-approved “Yves Saint Laurent,” since it premiered at the Cannes Film Festival last year, picking up 10 César nominations (the French equivalent of the Oscar). No one’s been more surprised by the acclaim than Valade herself, who takes the very French view that a career is not so much a job as a means to an end.

“Everything I’ve done has always been the best thing to do at that time. I started modeling because that was my best option to travel the world, express my creative side and provide everything I needed,” she says. “Now people are telling me I’m an actress. I want to say, ‘I just did one movie. I’m not an actress.’ What I think I am is me and that’s already enough and a lot.”

By her own admission, Valade is something of a staunch character. “Sometimes people will take my strong opinions and personality as somebody who is pretentious,” she says. Growing up in Nice, [France,] she used to skateboard in the Promenade des Anglais in her teens and get offers to model. “But at the beginning I didn’t want to,” she says in her lightning speed pitter-patter, like a French accented David Mamet character. “I had this vision of dumbass model, just like, la la la la. I wanted to be taken seriously. I never wore makeup, I never wore dresses. I was a real tomboy. I wanted to be listened to for my opinion and not get attention for my butt.”

After she tried and was bored by an internship in journalism at 23 — she holds a license in communications, a sort of bachelor’s — she was in Milan, where Nicolas Ghesquière cast her exclusively in Balenciaga’s spring 2011 show.

Her career took off after that — a photo shoot with Craig McDean led to opening Alexander Wang the next season. As one of the top 50 models in the world, she has her pick of jobs. “I say no to a lot of jobs, even jobs that pay $250,000, $500,000, because I want to keep the standard of quality very high. Because what matters to me is not the money or being famous, because that is something that goes.”

She was equally laissez-faire about taking on the role of Catroux.

“I was a bit afraid because if I was bad, I could lose my career as a model,” she recalls. “I thought, ‘I’m not a real actress. Maybe I’m going to look like s–t because they’re [the other actors] better.’”

When she finally committed in March 2013, she gave up modeling full-stop and dived into the life of Saint Laurent’s famous muse. Though she didn’t have access to Catroux herself, in the end, it may have been Valade’s own character that informed her performance more than any piece of research.

“It’s a vibe,” Valade says. “Everyone was telling me she was a crazy girl, but being crazy just means she’s a free mind. She’s in her own world and reality. She doesn’t need others.” Says the real Catroux: “I live in my cloud and I am a free spirit. Like Yves, I hate normal life.”

“I need something with essence, with substance, with meaning.”