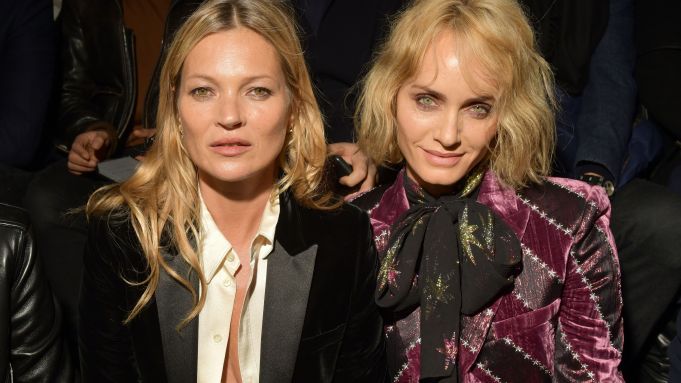 LIGHT SHOW: It’s a sure bet, the Eiffel Tower at nightfall.

“Magical,” said Abbey Lee Kershaw, sizing up the Saint Laurent setting, presided over by the towering monument, the guests lined up before a transparent wall of infinity mirrors. Kershaw, who recently played Yelena in a London theater production of Anton Chekhov’s “Uncle Vanya,” reflected on the project, concluding, “It’s hard work.” Then added, with a grin, “I love it.”

Laetitia Casta has also been active on stage — she, too, exploring domestic life, in a theater adaptation of Ingmar Bergman’s “Scenes From a Marriage.”

“I am drawn to characters in nonconformist roles. I love playing women who are experiencing something emotional, change, realization,” she said.

Matt Dillon, seated next to Salma Hayek, said he plays an astronaut in the upcoming film “Proxima.”’

He was just in Italy to promote Lars von Trier’s serial killer drama, “The House That Jack Built,” and is directing a documentary about Cuban scat singer El Gran Fellove.

After the show, Ben Hardy was raving about the boots, as well as a sparkly bomber jacket.

“I’ll see how healthy my bank balance is looking,” he laughed. The actor, who just returned from the Oscars ceremony for his role in “Bohemian Rhapsody,” is playing a vigilante in the upcoming Michael Bay film “Six Underground,” and described his character as a “hard-core expert.”