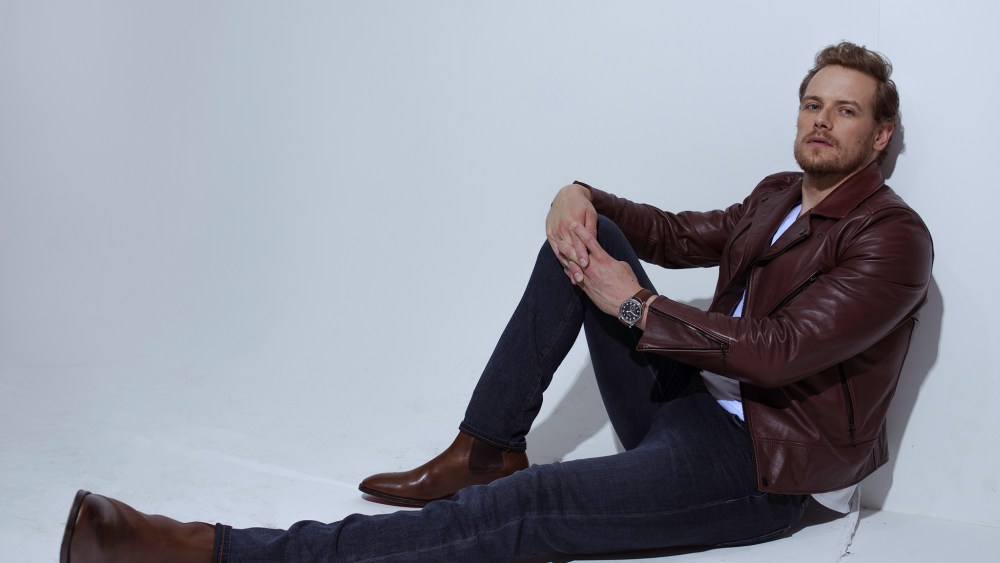 It’s often said that the best place to hide is in plain sight, but for Sam Heughan, that advice might not hold true. The actor has been palling around New York to promote his latest project, a comedy spy film, and it’s difficult to remain incognito when you have a dedicated fan club waiting outside each stop (a contingency that calls themselves — wait for it — “Heughligans”).

But the Heughligans are at bay for the moment. Making his way up to a photo studio near Bryant Park, Heughan browses through the passport of one of his team members, taking in the stops stamped in her booklet.

The Scottish actor has been putting his own passport to good use recently. After wrapping press duties in America for “The Spy Who Dumped Me” — which took him to Budapest, Berlin and Amsterdam while filming — Heughan will head back home to Glasgow for 10 days to arrange for a visa for South Africa, where he’ll next film a comic book-based feature with actor Vin Diesel in Cape Town.

“[Cape Town’s] such a great city, it’s everything I love — it’s the outdoors, it’s very good food and good wine, people,” says Heughan, who’s also a global brand ambassador for Barbour. “I hike a lot there, cycle; I just passed my motorbike test so touring my bike around there. Not surfing — I don’t want to go in water full of sharks,” he says, listing off his downtime plans while in South Africa. “It’s an amazing country. You can do so much.”

Watch Sam Heughan get tested on his knowledge of spy gear throughout the years:

Heughan is clearly devoted to a regimen of physical activity, so much so that it led him to develop a charitable initiative, My Peak Challenge, rooted in promoting an active lifestyle. “When I moved back to Scotland for ‘Outlander,’ I was rediscovering my country and going hiking and climbing and cycling and all of these things,” says Heughan, who spent his teenage years near Edinburgh. “And I was like, I really want to share my love of the outdoors and also challenge myself to do different things, and that’s sort of how My Peak Challenge was born.”

The initiative, which encourages goal-setting and provides around 10,000 members — “Peakers” — with video workouts and nutrition plans, benefits various charities, including Bloodwise and Marie Curie. An upcoming prize connected to the challenge is a trip to Scotland, but not just any trip to Scotland: “It’s like a date with me, but at one of our charity galas,” Heughan says, his cerulean eyes ablaze.

With his schedule pretty much mapped out through 2020, after filming the Vin Diesel movie “Bloodshot,” he has another project in October followed by picking back up with 10 months of filming for season five of “Outlander” early next year. He credits exercise, and quiet time at  home, as grounding forces.

“Exercise really helps me. It provides structure and to be honest, just being home, like in your own bed and a quiet evening. It sounds really boring, but actually it’s the moment when you can switch off and kind of regroup,” he says.

Heughan, who came up through the theater world and trained at the Royal Conservatoire of Scotland, has been in New York making the rounds for the female-led comedy “The Spy Who Dumped Me.” “It’s almost like the traditional Bond films have been flipped. You have female Bond roles, and I’m kind of like a bimbo really, I suppose,” he says of his character.

(Speaking of James Bond, Heughan is the latest name rumored to be in the running for the iconic role after Daniel Craig relinquishes his duties next year.)

In the film, Heughan plays a spy who provides contrast for the kookiness of leads Mila Kunis and Kate McKinnon. “The comedy for me was to play the straight guy and be a sort of bouncing board for them — they’re zany, and [my character] is like ‘what the hell is going on?’ It was fun to do that,” he says. “I’d never been a part of that, really; I come from a classical drama training of Shakespeare and Dostoyevsky and Chekhov, and then I was watching these women work, and there’s a real technique to it; it’s incredible. It’s not just like they’re funny people — they are funny — but it’s more about how hard they work.”

Says the film’s director and cowriter Susanna Fogel, “He’s very warm and level and played a good foil for [McKinnon]’s craziness, because he played the buttoned-up guy very well, but not in a cold way. He can go from being intimidating and scary to being somebody that you’re rooting for because he has that innate warmth.” And like a true shape-shifting undercover agent, he can also be funny.

“Comedy is kind of exciting because it’s very alive, there’s some energy to it and you have to keep it alive. It’s amazing when it works, and when it doesn’t you can feel it. So I can see how it can be addictive,” says Heughan, who doesn’t have any other comedic projects on the horizon — well, unless you count “Outlander.” “I think there’s always a comedic element, even actually to ‘Outlander.’ It’s the situations and how characters react to situations,” he says.

Heughan just wrapped season four of the Starz show, which has helped generate his dedicated fan base. He describes filming the upcoming season as having been tough and crazy, but adds that he thinks they “ended on probably the strongest finale of any season.”

In the new season, the cast is headed to America circa the 1700s. “It’s very much the pioneers and settlers, so it’s a lot of time spent in woods, and building and in the mud,” Heughan says. While that part of the season is set in North Carolina, Heughan got to stay local for the shoot. “We had to find specific locations in Scotland that look like North Carolina. It’s remarkable — it really does, we have these great forests in Scotland, and these incredible trees that are so old, and mountain ridges. I went to North Carolina to see where we were supposed to be set, and it does look remarkably similar.”

It’s a good thing that Heughan likes to spend so much time outside. During his recent time spent in New York, he has seen a few shows, including Armie Hammer’s “Straight White Men” (he liked it), and he has been training with Ed Naper. “I spend a lot of time here – I love walking around the streets. And [the city] is so easy to walk,” he says. “When I was here last week, I had a meeting just off Central Park, and then I walked all the way down to SoHo. It’s just such a nice walk.”

So if you’re trying to find him, just look to Broadway. If nothing else, you’re bound to see him up on a billboard along the way.