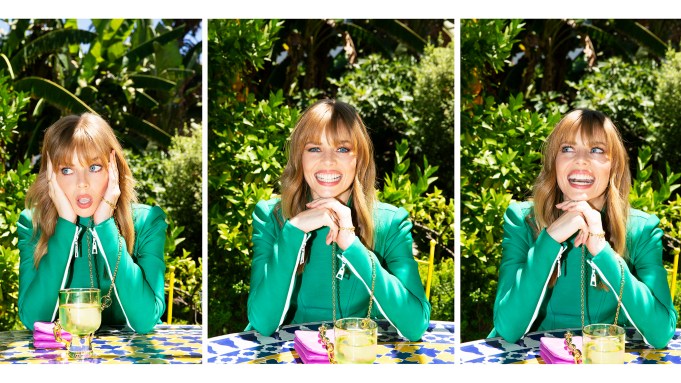 Kidman was attached to team up again with “Big Little Lies” writer David E. Kelley on an adaptation of another Liane Moriarty novel, “Nine Perfect Strangers,” and Himelstein got word through Kidman that Weaving was wanted for one of the roles.

“I looked it up and I was like, ‘Oh, my goodness.’ I bought the book and a couple of days later my agents rang and they told me that yeah, there was an offer for the role of Jessica. I was beside myself,” Weaving says over Zoom from her home in L.A. It kept getting better when she learned the list of who her co-stars would be — and the details around shooting. “Then they’re like, ‘And it’s filming in Australia and there’s no COVID-19 over there, and you’ll be in Byron on a paradise land,’” Weaving says. “[I was like] ‘I don’t even need to read the script. Let’s do it.’”

“Nine Perfect Strangers,” out today on Hulu, is the adaptation of “Big Little Lies” novelist Liane Moriarty’s book and was co-written for television by Kelley, who famously did “Big Little Lies” with Kidman for HBO. It follows a group of adults who check into a 10-day wellness retreat led by mysterious Russian guru Masha, played by Kidman, and it quickly becomes obvious that things are going to get a little bit more intense than massages and juice cleanses. It’s in many ways the perfect place to pick up right where “The White Lotus” left off, for one final good summer thrill.

Weaving, the 29-year-old rising Australian actress who has been making a name for herself since “Smilf” and “Hollywood,” stars alongside Michael Shannon, Melissa McCarthy, Luke Evans, Regina Hall and Bobby Cannavale as guests at the retreat; her character Jessica is an influencer addicted to her phone who arrives with her husband looking to renew their connection.

“This idea of being an influencer and how the world judges and perceives that…you have to be a real business person to get ahead in the influencer game. There’s so much competition, and to get ahead you have to know the algorithm and when to post, and what gets people’s attention. You have to really work on it all day, every day, and for some reason, and I’m guilty of this, too, there’s this judgmental reaction that we give these women, which is so strange. Why do we do that?” Weaving says.

To prepare she spent lots of time on Instagram following various influencers, and did a little bit of IRL following as well.

“The world was kind of normal [in Australia] so I was able to sit in coffee shops and walk around and watch influencers to see what phone calls they were making. I was just stalking,” she says. “It was a hard line, because it’s a comedy as well as a drama. I didn’t want to make fun of anyone. I just wanted to present a truth, and I always think anxiety is really funny, especially when it’s at its height, so I played around with that a lot. “

She describes the experience as “eye opening,” saying it led to a lot of self-reflection of how she perceives other women based on their looks.

“It was like a social experiment, because once I was in hair and makeup, which…they lifted my whole face with little wires and put fake teeth in. They contoured my lip so it looked like I had injections and stuff done. And people did treat me differently,” she says. “I would get talked down to a little bit, as if I was stupid.”

She was so altered that her face ID on her phone wouldn’t work when she was in character, and she says even the crew would talk differently to her when she was all doctored, versus her natural face.

She hopes that Jessica leads conversations among viewers similar to her own personal journey with learning not to judge.

“I even hear it now. I’ll just be in the car with friends, and someone will go, ‘Oh, she got too much filler.’ I’m just like, ‘Who cares, though?’” Weaving says. “I remember, when tabloids would be like, ‘They’ve ruined their face.’ Jesus, this is someone’s life. If it makes them feel better, what’s it to you?”

Weaving’s latest film, “Snake Eyes,” was recently released into theaters; during lockdown, after “Nine Perfect Strangers,” she went to Atlanta to shoot “The Valet” and is Prague bound soon to begin filming “Chevalier,” which has her studying opera singing.

“It takes four to 10 years to learn how to be an actual opera singer, and I’m trying to accomplish that in a couple of months — but I’m accepting and trying to just be OK with the process,” Weaving says. “So much of it is just being able to hold your breath for an inordinate amount of time.”

Jacqueline Toboni Nerds Out in ‘The L Word: Generation Q’

How Aretha Franklin Was Paid ‘Respect’ With Costumes by Clint Ramos

September’s Going to Be a Dramatic Month for Aaron Tveit

Ashe on Lollapalooza, ‘Love Is Not Enough’ and Her Love for Gucci