Before Sanford Biggers’ quilted works found their way to the walls of museums or a collector’s home, many of the pieces seemed destined for the trash. The artist works with antique quilts and discarded scraps, often gifted to him by way of someone’s closet, and transforms the materials into works of subversive fine art.

“I am a late collaborator adding another layer of code, which will later be interpreted by a viewer sometime down the road,” says Biggers, who recently has been splitting his time between out East and his studio in Harlem.

The quilts are a method of disrupting hierarchal systems within the art world, established by white men to measure what work is deemed “important.” Textiles and quilts have often been excluded from those institutions. “I think the role of an artist, as well as the role of an activist, is to disrupt that narrative,” adds Biggers.

Biggers mounted the first museum survey of his quilted works at the Bronx Museum. Originally slated to open in the spring, “Codeswitch” was postponed to the fall and will now be open through January 2021 before traveling to the Museum of African Art in Los Angeles, followed by the Contemporary Art Center in New Orleans. The museum exhibition is a full-circle moment for Biggers, who first gravitated toward exploring the medium of quilts after seeing the Whitney Museum’s “Quilts of Gee’s Bend” exhibition in 2002. Although Biggers received his MFA in painting, he worked heavily in sculpture, installation, sound and video; the Whitney show brought him back to the realm of painting. 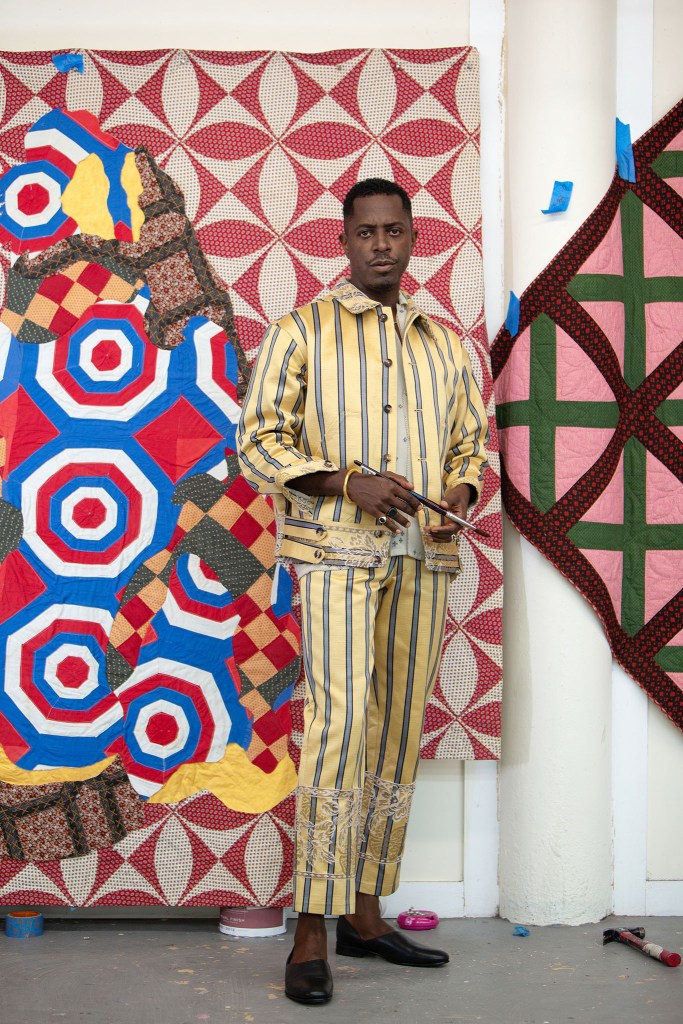 “Quilts and craft have been denigrated by the high art world as ‘women’s work’ and not of the same caliber as modernist painting,” says Biggers, who recognized that the quilts in the show were using compositional and formal ideas similar to painting. And the quilts — made by a group of disenfranchised Black women based in Alabama — were being shown in the tony context of a New York cultural institution. “I saw that as a political and cultural intervention of sorts.”

The artist began repurposing old quilts. “Repairing them, embellishing them, maybe defacing them, maybe erasing, but ultimately working with those as materials to then create another work,” says Bigger. “That’s a type of intervention. But now putting those back into the museum to be seen, that takes them from the garbage can I might’ve found the original piece, and gives it a different contextual reading.”

Biggers is interested in the idea of code switching, which plays out in his works depending on where they are being viewed and by whom. Casual museum visitors read the quilts differently than art history buffs or art collectors; similarly, the quilts read differently depending on whether they’re in a private home or gallery or museum. The works can be viewed within a social justice context, or through an aesthetic and historical lens. Biggers describes his works as multivalent — the dominant codes are in the eye of the beholder, and people will tap into their own associations when reading meaning from the quilts.

“The quilts that are in this show are also code switching because they are paintings — but also drawings and also sculptural and also performative objects,” adds Biggers. “Because they’ve actually been used in the performance of life: the bodies that they’ve warmed and comforted, as well as the hands and bodies that made the quilts in the first place.”

That idea of code switching and community is inherent in quilting — the process of joining often dissimilar fabric together to create a collective pattern or image — but this concept is underscored dramatically in how Biggers acquires the antique quilts. Biggers created his first quilt-based works in 2009 for the Mother Bethel African Methodist Episcopal Church in Philadelphia, during which he explored the role of quilts within the Underground Railroad — in that case, the quilts were code switching from a utilitarian object to a means of communication for survival.

During a studio visit connected to that show, a woman offered him a stack of around 25 quilts made before 1900. She turned out to be a descendant of Andrew Jackson, and some of the quilts she gave him dated back to Jackson’s presidency. “She got the idea that what I was doing also was rewriting directly on pieces of Americana, on pieces of American history,” says Biggers. 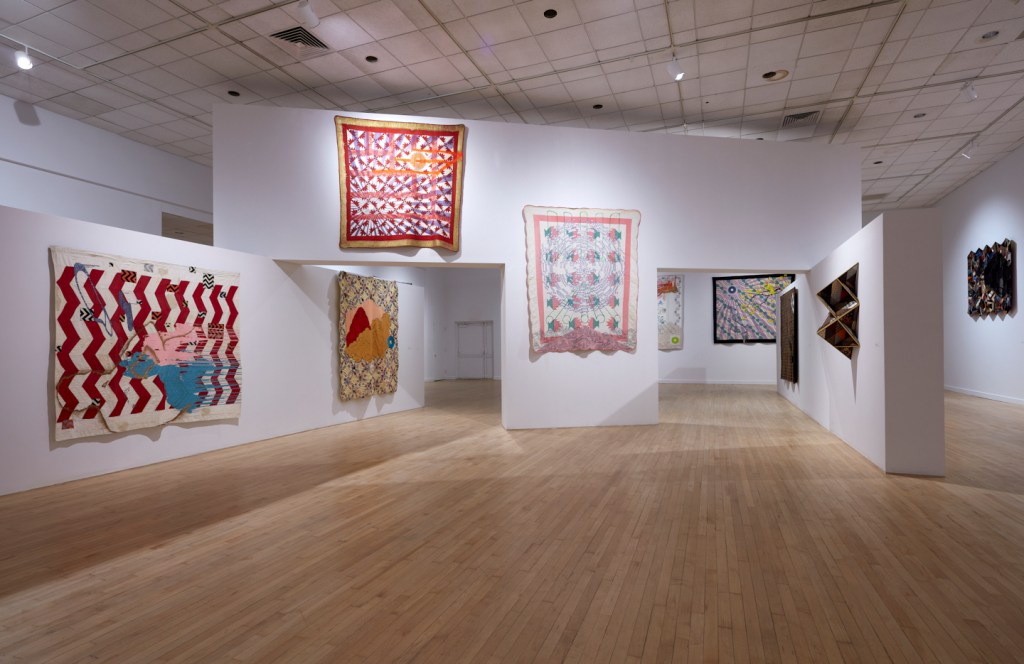 Installation view of “Codeswitch” at the Bronx Museum.  Courtesy of Argenis Apolinario Photography

Since then, he’s continued to receive quilt donations, sometimes anonymously delivered to his studio door. “I once did a lecture in North Carolina and a woman drove an hour and a half and sat in the audience and came up to me afterwards and gave me a box of quilt remnants from her neighbor who was 99 years old. And she said, ‘I know what you’ve been doing. I’ve been seeing your work on social media,'” says Biggers. “So it ends up being this weird, almost social experiment.”

In the past few years, Biggers has also applied a sculptural approach to working with quilts, stretching the idea of dimension and perspective by transforming the works into geometric three-dimensional sculptures. Biggers finds synergy with fashion designers, specifically Bode and Ikiré Jones, who uses clothing design to address social justice issues. While Biggers first considered working with fabric after seeing the Gee Bend’s quilts in the context of the Whitney Museum, the artist was exposed to the idea of textiles as a child growing up in L.A. His mother brought photo references of runway designs to seamstresses around L.A.’s garment district to create her own versions of the clothes.

“Even though I was crawling around on the floor or running around and getting into trouble while she was sorting through bolts of fabric, I learned about fabric and pattern and the quality of textiles through that,” he says. “The funny thing is, I didn’t even reconnect with those stories of my mother until I had been doing the quilts for five or six years. One day I’m sitting in my studio, and I was like, wait a second — this is actually muscle memory, going through all these fabrics. Because now I have bins and bins of fabric and going through them in some weird way — I hate to get too, what’s the word, New Age-y for you — but in some ways it’s a connection to my mom.” 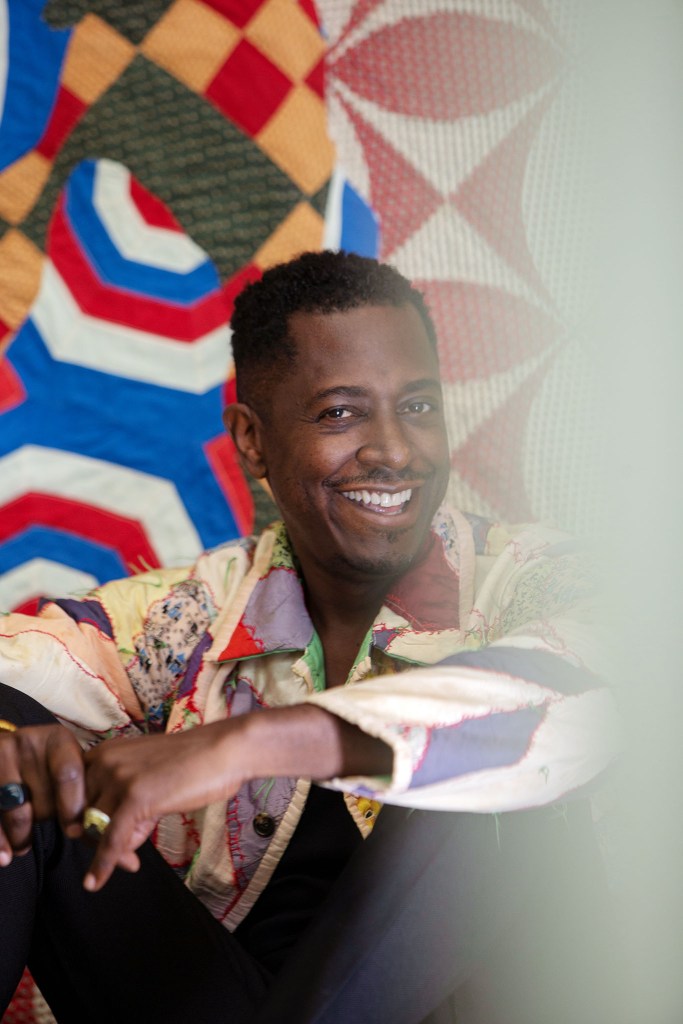 This fall, Biggers will also show some new quilt works alongside his marble chimera sculptures in a solo exhibition, “Soft Truths,” at Marianne Boesky Gallery. The sculptures were informed by the year he spent at the American Academy in Rome in 2017, when Biggers was thinking about the fall of empires and the characteristics that cause empires to fall apart — coincidentally, very apropos to the current moment. “I was surrounded by marble sculptures, and I started to use marble to create objects that fuse different African elements and European elements,” he says.

The gallery show explores the blurred lines between appropriation and authenticity, and archaic technology (marble carving) alongside futuristic technology like virtual reality. Some of the quilts will contain a QR code that once scanned will take viewers to video performances by Biggers’ conceptual audiovisual band, Moon Medicin, which also incorporate the quilts. “The chimeras are patchworking different aesthetics from history,” he says. “There is that similarity throughout all of my work. It’s always been about patchwork and syncretism of seemingly different elements.”

That idea extends, yes, even to Moon Medicin. Biggers describes the band’s performances as a mashup. They’ll take a popular song like “Weird Fishes” by Radiohead and play it in a more funked-out way. Or maybe they’ll play an interpretation of Prince’s “Controversy.” (Prince’s original bassist, André Cymone, is a member of Moon Medicin.) But instead of using the song’s original lyrics, they use lyrics from Black national anthem “Life Every Voice and Sing.” “So there’s a lot of patchworking in those mashups,” says Biggers.

At the end of the day, maybe everything in life is just one big quilt, waiting to welcome its next mark. 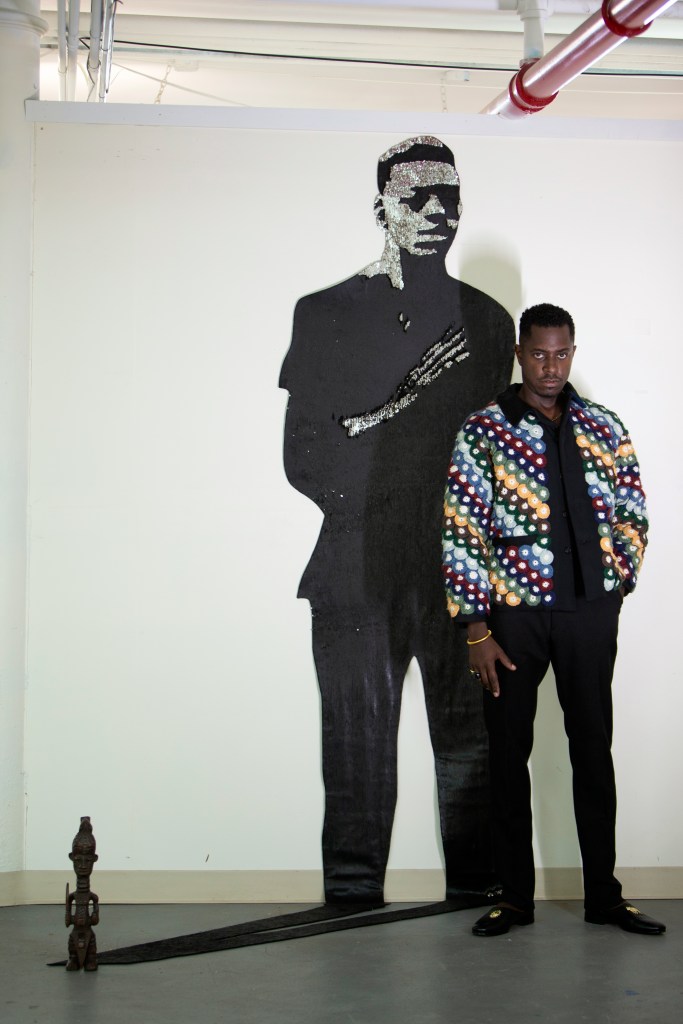