The comedian shot to fame during lockdown for lip-synching Trump on TikTok. Now she looks ahead to life after TikTok if he loses the election, which she's more than ready for. 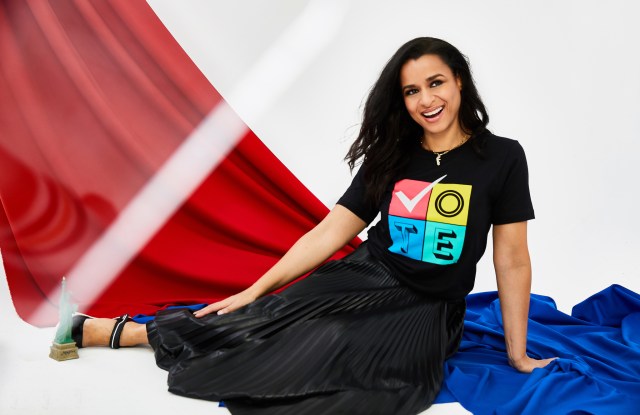 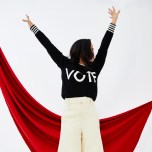 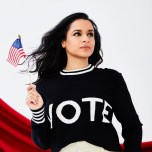 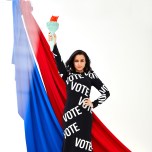 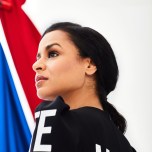 Sarah Cooper started 2020 wanting to accomplish two things: she wanted to work on her next book, and she wanted to have a late-night set.

For a while, things were going very much according to plan. At the top of the year she performed at a lot of open mics, she hosted open mics, she was taking classes — everything she could think of to get better at stand-up. She approached the book the same way: head down, goal in sight. It was her self-declared make-or-break year: if she didn’t ring in 2021 with a late-night set under her belt, she was thinking of hanging it up and heading back to her previous job at Google, accepting that a career in comedy maybe just wasn’t going to happen.

“I really wasn’t making a ton of money and felt bad for my husband, who’d been supporting us for seven years now, since I left Google,” where she was a user-experience designer, Cooper says. “That was kind of it. I was like, ‘I’m either going to get a late-night special or I’m going to go back to Google.’”

Meeting Cooper, it’s almost strange to hear what her real voice sounds like; any one of the millions of people who have watched her TikTok videos online are very familiar with her face, but are accustomed to hearing President Trump’s voice dubbed over hers instead. While at home during lockdown, Cooper, unable to do stand-up, recalled the TikTok tutorial her nephews had given her over the summer and started playing around on the app.

“I saw a really short clip of Trump and some woman’s head was lip-syncing him and I thought, ‘Oh, that’s so weird seeing his voice coming out of a woman’s mouth,’” she says. Then came his coronavirus task-force meetings, where she was struck by how “empty” his words were.

“It reminded me of being in a meeting and having a dude come in and just say a bunch of nonsense and people nod. It makes sense, even though it’s like, ‘No, what did he just say?’” she says. “I had those moments, and I was like, ‘I want to be that guy. I want to be the guy that’s just like, ‘Yeah, whatever. I’m brilliant. I totally got this.’ So, it was really more of not me trying to be Trump, but what if Trump were me?”

She started making her now well-known videos, where she lip-synchs over Trump’s various interviews or press conferences, mimicking his movement or adding creative liberties to highlight the nonsense behind what is being said. After a few videos, her enthusiasm trailed off and she was thinking of abandoning the Trump TikToks. Then came the disinfectant moment.

“When he had the conference where he was talking about injecting Lysol into your veins, I listened to that clip and I just saw the whole thing in my head,” Cooper says. “When I made that one, that was going to be my last one — and then that one went viral and then he kept saying ridiculous things, and so I just kept making them.”

Staring down the election, the question of what will happen to Cooper’s career if — “when,” she corrects — Trump loses arises. But the comedian is more than ready for what comes next, even if it means her claim-to-fame content is a thing of the past. Up first she has a Netflix special, out Oct. 27, which was directed by Natasha Lyonne and features a cast of guest stars including Jon Hamm, Helen Mirren, Ben Stiller, Megan Thee Stallion, Fred Armisen, Whoopi Goldberg and more, before she will develop her book, “How to Be Successful Without Hurting Men’s Feelings,” into a series for CBS and dive into a few other projects she’s not at liberty to discuss.

After years of trying to get an agent, Cooper landed one due to the Trump videos, and soon the agent arranged a question-and-answer with the thousands of new online followers she’d attracted.

“As much as people were excited to talk to me, they were also really excited to bash Trump. My agents were like, ‘Yes, these videos are great. But at the same time, you don’t want to build your entire career on Trump-bashing, on bashing a guy who A, sucks, and B, hopefully isn’t going to be around very long, and C, you don’t want to be lip-synching your entire life,’” Cooper says.

She didn’t set out to be the creator of politically minded comedy, even if she’s come to light for mocking the President.

“I feel like my content will always have an element of politics in it. I mean, ‘How to Be Successful Without Hurting Men’s Feelings,’ it’s political without being political, I guess. It’s a real feminist book. So, is that politics? I don’t know. It’s really hard to separate politics from things now,” she says.

“As a Black woman, as a Jamaican immigrant, everything I do is this act of resistance, especially being in a male-dominated world in tech, in a male-dominated world in comedy. It’s just a top-of-mind thing,” Cooper, 42, continues. “I want to make people laugh, that’s my number-one thing. The funny has to come first. But then the next sort of thing is the thought [of what] I want to put behind it, and the satire, and what am I trying to say? I feel like I’ll always want to be saying something.”

Her Trump videos aim to say that the man whose words she is lip-synching should not be considered an appropriate leader — that his words are as ridiculous as ever, even if the public has become numbed to hearing them over the last four years.

“Those videos basically point out in very clear fashion how [ridiculous he sounds]. To me, they were a way to highlight his ineptitude and his incompetence. They were a way to get people to check back in who had checked out, because it’s so infuriating what’s going on,” Cooper says. “Being able to do those things, to make the videos and have it be this intersection of news and comedy and politics and also performance, I think it was just a really special connection between all those things. I wasn’t trying to make something like that, but I’m glad that’s kind of what came out of it.”

Born in Jamaica, Cooper immigrated to the U.S. with her parents when she was three years old and was raised in Rockville, Md., outside of Washington. Declaring an interest in acting seemed ludicrous to her from an early age, though she loved it from the outset.

“I’m pretty easily discouraged sometimes, so wanting to be an actress is almost like wanting to be a princess. In my head, that’s what it was like,” says Cooper, who comes across strong and remarkably sure of herself despite declaring insecurities. “I was like, ‘Everybody wants the same thing I want and I’m never going to get it because everybody wants it.’ Even when I turned 30 and I quit my job and I was trying to be an actress, even then I was like, ‘I’m too fat for this, my nose is too big, my cheeks are too big, my teeth aren’t straight enough, my hair isn’t thick enough.’ I had all of these thoughts that I was not going to be able to do this because I was not made for it.”

It was then relatively easy for her to put any acting or comedy dreams on the back burner, which she did for years — and was quite successful along the way, worth adding. She graduated magna cum laude from the University of Maryland with a degree in economics and earned a master’s in digital media from Georgia Tech, which launched her into a career at Yahoo and Google. Her experience in the tech world, which is largely male-dominated, has proven ample training ground for the two books she’s written — “100 Tricks to Appear Smart in Meetings” and “How to Be Successful Without Hurting Men’s Feelings” — and getting the delivery of Trump’s “isms” in just a way that they land with the magnitude they have.

“Trump to me is a wannabe businessman. I wouldn’t say that every [chief executive officer] of every tech company is a Trump. But I would say that there are elements of Trump in the corporate world,” Cooper says. “What Trump is, is he’s an imitator. It’s just empty. It’s a facade, it’s gold-plated. The second you’ve cut it open, there’s nothing in it. There’s a huge connection that I didn’t see before between the book I wrote, ‘100 Tricks to Appear Smart in Meetings,’ and exactly what Trump is doing, which I totally see now.”

So yes, Sarah Cooper is thankful for the year she’s had thus far and she’s more than ready for Trump to lose the election — and for the American public to get out and vote.

“I’m very hopeful. I mean, over 30 million people have already voted. People are fired up. So that gives me hope that he will be gone,” Cooper says. “As much as I love this moment of making the videos, I’m a person that moves on. I’ve always been a person that says, ‘This was great for this time. What’s next?’”