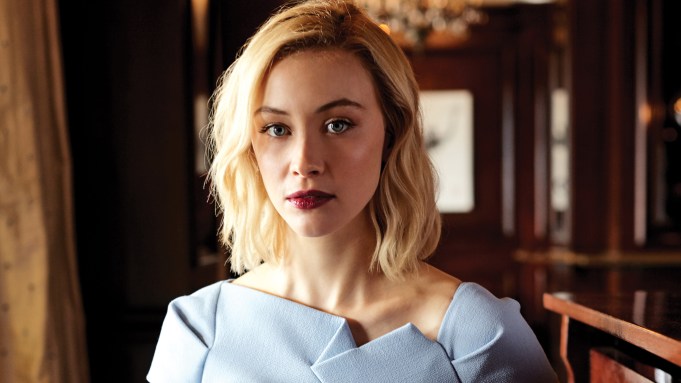 Sarah Gadon knows a little something about being a time traveler. The Canadian actress, 28, stars opposite James Franco in Hulu’s “11.22.63,” a miniseries adaptation of the Stephen King bestseller about a modern-day man who journeys back decades to try to prevent the assassination of John F. Kennedy. At Sundance this year, her buzzy in-competition film “Indignation,” an adaptation of Philip Roth’s Fifties-set novel, premiered to strong reviews. WWD sat down with the actress recently to discuss past, present and future.

WWD: What drew you to playing a character in the Sixties?

Sarah Gadon: There’s always something very seductive about doing a period piece, because we have all of the nostalgia from the present for that period. Kevin Macdonald, who directed the pilot episode, really created this level of restraint so that we weren’t “French kissing” the period. Everything about how I dress and how I wore my hair was real. I wore a girdle. That is not a joy, to be wearing that kind of clothing. A lot of the references from Tippi Hedren to Kim Novak are very much in that Hitchcock world of tailored suits.

WWD: Did you come in with much knowledge about the JFK era?

SG: I grew up in Toronto, so this was not a part of my country’s history in the same way as it would have been taught in school to an American girl. Kennedy’s assassination was a real, true loss of innocence. In a lot of ways, for me, Sadie was a real representation of that time of innocence, and her awakening, her discovery, really represents that kind of evolution in American history.

WWD: You’ve also got “Indignation,” which got a lot of buzz at Sundance.

SG: People are really excited about it because it’s James Schamus’ directorial debut. James has worn many hats in the industry and has touched many people’s careers in a positive way, so I think people are curious to see what he has coming. For me, being a big Philip Roth fan, seeing his writing adapted for the screen is really powerful. I think that Logan Lerman, who plays the main character in the film, delivers the performance of a career.

WWD: Were the period clothes there more glamorous?

SG: The Fifties is so much more innocent, I think, than the Sixties. I was playing a college student so there was just so much plaid.

WWD: As far as your personal fashion, what sort of style do you go for?

SG: I feel like I have these very different personas. I have my “Toronto film student” [look]: I wear a lot of Acne; I’m wearing my Common Projects running shoes. Then you step into the world of being an actress and you have to kind of amp up your style. I’m wearing Roland Mouret today; I think he cuts beautifully for the feminine figure. I also started working with Armani Cosmetics as the face of their brand. I think that Mr. Armani is an incredible designer and I love his tailoring. I also love Erdem, Sonia Rykiel, Isabel Marant.

WWD: And you have other career ambitions in the industry as well?

SG: I studied film in school and I love film so much. I watch movies all time, so when I have a night off, I got a projector for my house. I love the French New Wave. I love Italian Neorealism. I really like British Kitchen Sink Realism as well…Crazy about Catherine Deneuve [then], and crazy about her now.