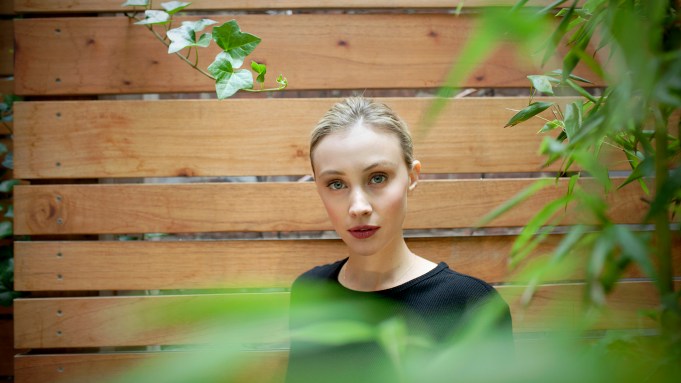 Sarah Gadon’s latest project was at once the hardest thing she’s ever done and a “mind f–k all the time” at that. Luckily for the actress, the shoot schedule in her native Toronto meant both the comforts of her own bed to crash into each night and, of course, some help from mom.

“I don’t think I would’ve made it through the project if I didn’t get to sleep in my own bed and have my mom help me out,” she says.

Gadon is the lead character Grace Marks in “Alias Grace,” the TV adaptation of Margaret Atwood’s novel, which comes to Netflix on Nov. 3 on the heels of the Emmy-winning success of the Atwood-adaptation “Handmaid’s Tale,” done for Hulu.

The series tells the true story of Marks, a Northern Irish immigrant who worked as a housemaid in Upper Canada and was convicted of a double murder and imprisoned at the age of 16.

“The trial was totally sensationalized in the media — it was that generation’s version of the OJ Simpson trial. She was made infamous because she was this young working class girl who murdered above her station,” Gadon says.

That quest for her true identity is entirely what drew the actress to the project.

“As an actor you’re really fascinated by identity and the cultivation of identity. Grace was a person whose identity was taken from her when she was 16, and it was overtaken by the media. And who she really was and what she really did kind of became irrelevant because of all of the prejudices of the time — the ideology of what it was to be a working class woman — were projected onto her and amplified,” the 30-year-old says. “I think that’s fascinating to anyone but also as an actor, when you have this relationship to and from the media and things are taken out of context and you see how people project their ideas onto you of who they want you to be, that’s a real thing that I’ve experienced.”

Gadon, who is known for the Hulu series “11.22.63” and will be seen in films “Octavio Is Dead” and “The Death and Life of John F. Donovan,” immersed fully into the “Alias Grace” schedule. She listened to BBC Radio Ulster to nail the Northern Irish accent and studying the script to differentiate the different stages of Marks’ life — the series follows her from age 16 to 40. The physical and emotional demands of the role were also uniquely taxing.

“Mary [Harron, the director] wanted me to do everything for real, so if I was milking a cow or feeding animals or lugging water or churning butter or sewing or kneading bread, it was all for real,” Gadon says. “Grace is the type of person that finds comfort in rigorous labor. It’s a way for her to release her anxiety.

“There’s so much that happens to her from abuse to attempted rape to being a subordinate everyday in an abusive household,” Gadon continues. “And then there’s obviously the different versions of the story — did she commit these murders? And which version of the story were we telling, which version were we exploring? Is this with the intent of guilt? Is this with the intent of innocence? It was the hardest job I’ve ever had, but at the same time the most stimulating. It was almost like being a student again — carving out this time to do these things, to become this person. It was a huge period of growth for me.”

Sadie Sink: The New Kid on the ‘Stranger Things’ Block