Sarah Sutherland stars in “Shut Up and Drive,” a drama about a relationship forged during a road trip that debuted at the TriBeCa Film Festival. 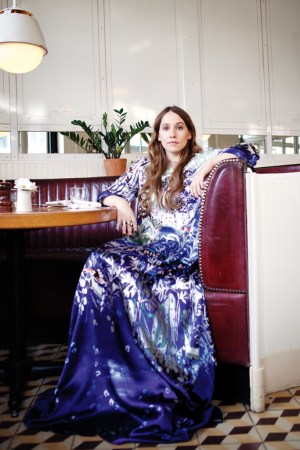 Sarah Sutherland arrives at The Standard High Line hotel without an entourage or even a manager in sight. She’s carrying a garment bag filled with options her stylist pulled for the premiere of the film “Shut Up and Drive,” a drama about a relationship forged during a road trip that debuted at the TriBeCa Film Festival. Dressed in a Theory pajama top, chunky UNIF platform shoes and vintage trousers pulled from the wardrobe department of “Veep” — the political satire in which she plays Julia Louis-Dreyfus’ sullen daughter — the unassuming Sutherland flips through a rack of clothes, gravitating toward Seventies colors and silhouettes.

“My style is vintage fashion meets Hot Topic on a bad day,” she laughs. “I’m also a big fan of ‘Clueless’-inspired clothes.” Her long wavy hair and hazel green eyes lend themselves well to that hippie aesthetic, though her demeanor is equal parts bohemian-laid-back and quirky-contemplative. Sutherland’s self-effacing attitude may not be unusual for an up-and-coming actress, but it is somewhat surprising given her lineage. Dad is Kiefer Sutherland, of “Stand by Me,” “Young Guns” and “24,” and her grandfather is Donald Sutherland (“M*A*S*H,” “Ordinary People” and “The Hunger Games”). But if anything, the 27-year-old keeps a safe distance between her family and her career. Last April, in an interview with David Letterman, Kiefer told the “Late Show” host, “I’ve actually offered her two jobs, which she’s turned down respectfully, because she really wants to do this her own way.”

Her own way involved a degree from New York University’s Tisch Experimental Theatre Wing. She calls her desire to act “a slow burn. It started with the fact that I was an avid reader of plays as a kid. My family didn’t directly influence it, but a lot of what I learned from both [my dad] and my grandfather had to do with observing the way that they conducted their lives and their relationships and the books that they read and the way that they watched films. I think I just naturally gravitated toward living with that kind of richness and attention to human behavior and complexity, and sort of being endlessly fascinated and mildly obsessed with living in that messy gray area.”

While at NYU she wrote a one-woman play called “The Skin of a Grape” and performed alongside Zoe Worth, her “Shut Up and Drive” costar. “Zoe and I met in middle school. She had this fantastic pale pink coat with a fur collar that she would wear in California in the sun. We have a long history of working together and supporting each other’s work,” says Sutherland. “Drive” marks the first film the friends have done together, though, and because of their history the audition process was far from conventional. “Zoe came over to my house and was talking over the story points of this script that she had been developing and working on with [director Melanie Shaw]. She was asking me for advice about a lot of things and I was speaking very candidly, but I had no idea that she was sussing me out and had me in mind,” she says. “Then she asked me immediately after I left if I wanted to go to Disneyland with her and Mel, who I hadn’t met yet. And I thought, of course. Which was essentially, unbeknownst to me, my audition.”

It’s an audition method that can be attributed to The Collectin, a theater group that Worth founded with fellow NYU student Alden Ehrenreich in 2009 (Shaw and Sutherland are members). Now based in Los Angeles, The Collectin meets for weekly workshops and performs monthly in Hollywood, focusing on a creative process that’s built around the specific qualities of an actor. “Shut Up and Drive” is the second feature film to come out of the community — Shaw also wrote and directed the first, “Running Wild.” “Mel just really wants people to feel natural and have chemistry,” says Sutherland. “Part of the audition process was also going to Collectin meetings, and that was really cool because I’m so accustomed to having a tribe of creative people and collaborators from going to Tisch, and I felt a huge absence of that in Los Angeles.”

As a result, “Drive” was a homecoming of sorts. “A lot of people that worked on the film were people I knew from my years at NYU so it was like being able to do this epic road trip with your best friends and create work at the same time,” says Sutherland. “However fun, it’s also grueling to be on the road and working however many hours that we did and with the budget that we had.” Filming started in Los Angeles and continued through Arizona, New Mexico, Texas and New Orleans. “It was really amazing to have this mirrored experience of a road trip through the Southwest,” she says, adding that sing-alongs to Eminem, Wardell and Dawes provided the soundtrack to the trip.

This is the second film Sutherland has had at the TriBeCa Film Festival — she played a potato farmer with bigger ambitions in last year’s “Beneath the Harvest Sky” — but it’s her role in “Veep” that has made her face recognizable. Kind of. “There was this really sweet girl who worked at a coffee shop that I frequented when we were shooting [‘Veep’] in Baltimore and I remember her coming up to me and saying, ‘I didn’t recognize you initially because you smile so much.’ My character never smiles,” recalls Sutherland. “When I’m playing her I always imagine I have something just slightly foul smelling lining my upper lip because I feel like her general disposition is just disdain and disgust for lots of things around her.”

It’s also the gig that has taught her the most. “‘Veep’ was my first job that wasn’t theater outside of college and to step into a show with all these comedic heavyweights and people that are beyond skilled improvisers was really intimidating and yet they made it easy. I just had to listen and respond to whatever they were doing and my job was done,” she says.

Filming for season five of “Veep” is on the horizon. As for other future projects, Sutherland just wrapped “Chronic” — a film from writer-director Michel Franco and starring Tim Roth about a nurse practitioner who assists terminally ill patients that will premiere at the Cannes Film Festival next month. She also has plans to write her own work. “I write every day. I would love to write a play, I would love to write a film, I’m interested in directing, all of it,” she says. “I just want to learn as much as I possibly can.”