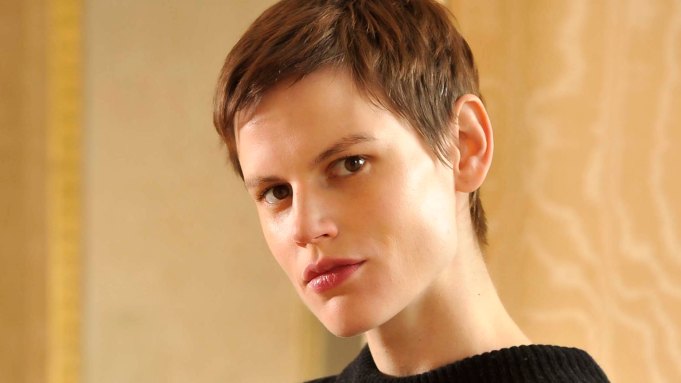 Not only is the Dutch model expecting her first child with photographer Vincent van de Wijngaard, she is also preparing to make her publishing debut with a book featuring her art, to be unveiled at a signing at the Yvon Lambert bookshop in Paris at the end of Paris Couture Week. “The Accidental Fold,” out Thursday, features scans of discarded objects that de Brauw, who studied fine arts at the Gerrit Rietveld Academie in Amsterdam, has picked up on her travels. In her hands, pieces of trash — ranging from paper scraps to a rusty CD — take on an eerie beauty.

“I’ve been collecting these objects for the last five, six years and it feels very natural to come out with this now. I’m also expecting a baby in two months, so it feels like there’s a new phase that’s entering my life,” she says. “Maybe my own work will take on more importance.”

De Brauw started collecting detritus and repurposing it while making the casting rounds over the past several seasons. She resumed her modeling career at the age of 28 — an unheard feat as 28 is ancient by industry standards — following a break to focus on her studies. She took to carrying around an A4 scanner and immortalizing the debris that caught her eye. “It’s like a diary,” she notes.

She worked with creative director Erik Haberfeld — whose clients include Van Cleef & Arpels, Hermès and Eres — on the design of the book, playing with the transparency of the pages to layer images. The self-published tome will be available in a limited edition of 500, priced at 50 euros, or $54 at current exchange.

Though her rise to the top of the modeling industry — with campaigns for brands including Givenchy, Versace, Chanel, Fendi and Prada — has inevitably eclipsed her artistic ambitions, de Brauw is nothing but grateful.

“They’re separate worlds, but they also belong together. I can do one thing because of the other,” she says. “This really is the best thing that happened to me. There were moments, especially in the beginning, when I doubted. I was like, ‘My God, this is really far from who I am.’”

She is keenly aware that being self-financed gives her more freedom than many of her artist friends enjoy. “My work method is letting things cook for a very long time,” she notes. “It’s not easy at the moment for many people, so to be able to do the job that I do is like winning the lottery. I really think that every day.”

The model is in talks with a publisher on a second book that would focus on her most recent art performance, which involved walking from the northernmost tip of Manhattan to the south of the borough over a period of 20 hours. Van de Wijngaard was on hand to document her encounters with people along the way.

“It’s crossing Manhattan in one line, and it’s also capturing stories – points on the line. I like to see life like that. We are all lines in a way. Our lives are lines, and knots or meetings are points on the line,” explains de Brauw.

The now 34-year-old was struck by the fact that most of the stories people offered to share tended to be sad ones. She attributes it to a yearning for human warmth in the digital age.

“We don’t want to be on screens all the time, and we don’t want to be wandering by ourselves alone. We’re humans and, like animals, we just want to be close to each other, actually, but there’s something that’s withholding us from being simple, and a city like New York or Paris can be really harsh,” she muses.

De Brauw herself is no social media addict. Instagram is her only indulgence, and her account — which tallies a respectable 34,500 followers — features a mix of her modeling spreads and personal projects. “I refuse to post selfies,” she says with a grin.

Another part of her life that is off-limits (in the IG sense) is yoga, which she credits with keeping her grounded. “I would never post myself doing yoga. That’s the opposite of what yoga is. I try not to judge other people who do that, but it’s not about the yoga pants or the abs,” she says quietly.

That reserved attitude — which also permeates her artistic output — can seem miles removed from fashion’s voracious appetite for novelty but, then, de Brauw is comfortable with having a double identity.

“How people perceive me in images is very different from how I am as a person,” she remarks. “I’m often cast as a masculine figure, but in reality I’m not masculine and I don’t have an issue with that in my life, that I feel half-man, half-woman — no.”

Her androgynous look led to the project that perhaps best unites her artistic and modeling skills — the 2013 video for David Bowie’s “The Stars (Are Out Tonight),” in which she plays a disquieting gender-bending celebrity who eventually ends up taking Bowie’s place.

“I had to wear his clothes and his socks. I was really scared to be sweaty. He actually wanted the clothes back,” she recalls.