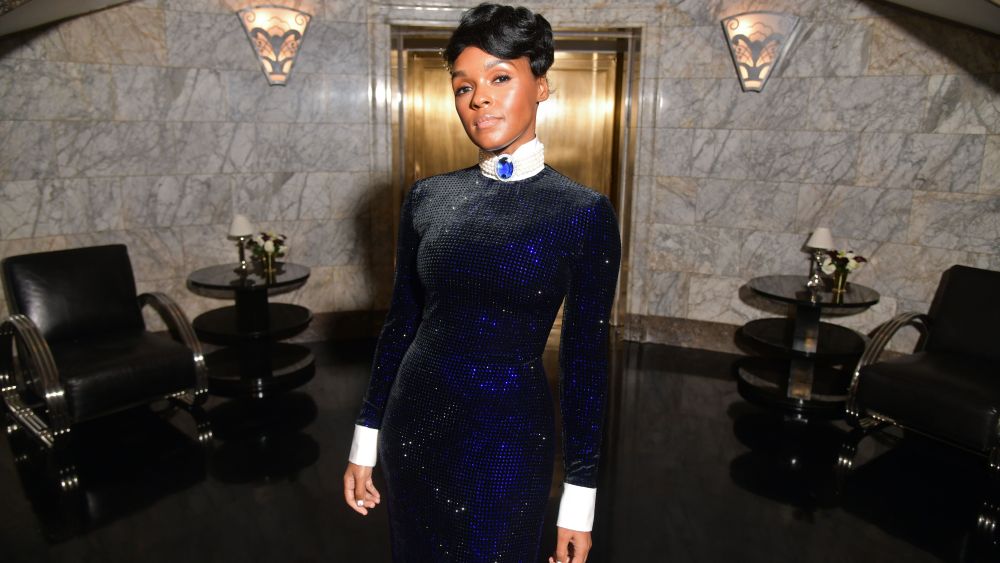 On Saturday night, the most exclusive club to be invited into was down in Wall Street, where Ralph’s Club had set up shop for Ralph Lauren’s latest show. Guests including Janelle Monáe, Cate Blanchett, Mandy Moore, Kathryn Newton, Henry Golding, Luka Sabbat, A$AP Ferg, Diana Silvers, Sistine Stallone, Poppy Delevingne, Kevin Love, Cameron Dallas, Eiza Gonzalez, Lily Aldridge and more were asked to come in black and white formalwear, where they took in the show munching on bar snacks, corned beef sandwiches and sipping cocktails, in what will likely be the most civilized show of the week.

“I knew it was going to be black and white, and then they pulled from the archives and this is from the Gatsby collection,” Newton said, twirling about in an ivory shaker of a dress. “I actually pulled the tag off and then I read it and it said ‘do not remove.’” Oops.

Newton has had plenty of dress-up occasions during NYFW. The night before she was in Valentino couture at Harper’s Bazaar party, but Ralph was her last stop before heading home and back to work.

“My next project is with Vince Vaughn, and I can’t say what the project is but we swap bodies. He’s a serial killer and I’m a teenage girl,” she said. “So you can imagine.”

After the models, Monáe took the stage in black-and-white Ralph to perform a set of five classic songs, from Frank Sinatra’s “Fly Me to the Moon” to Nat King Cole’s “Smile.” Her energetic performance — which included weaving through the crowd, standing on chairs and tables, sliding along on the floor and plopping into a few male guests’ laps — had the crowd whooping and boogeying on their feet.

After the show, she changed into a midnight velvet, high-neck gown and made her way through the crowd, accepting compliments from the lingering showgoers.

“I didn’t want it to feel stuffy,” she said of her set. “Because sometimes when people think of jazz they think ‘Oh let’s sit down, let’s have a glass of wine’ and that’s cool, but there’s also so much freedom and fun and creativity in jazz and I wanted to make sure that I brought up-tempos as well.”

Monáe said the Ralph team contacted her a month or so prior about performing, and it was a throwback to her early days in the fashion sphere.

“The great thing, Ralph Lauren invited me to my first New York Fashion Week — like when I first started my career,” she said. “So to be invited back again, and to be here on an even bigger level, this Art Deco jazz period, it’s a dream. To me, he’s one of the most amazing and iconic American designers.”

Monáe will next be seen this fall in the Harriet Tubman film “Harriet,” alongside Cynthia Erivo, and is about to begin work on season two of “Homecoming,” which is executive produced by season one star Julia Roberts.

The night’s black-and-white dress code was “very me,” Monáe said. “Clothing is art for me. If I’m expressing myself, I do it through clothes. Not through interviews, not through music but through my clothes. And it’s a form of rebellion also: blurring the lines of what’s feminine and what’s masculine, and saying that you can’t control me. And also you don’t get to say how a woman should present herself. I have agency, I get to decide. Clothes can represent a certain song to me, and sometimes it can feel like when I fall in love, sometimes it can feel, like, angry, it can feel like a party.”