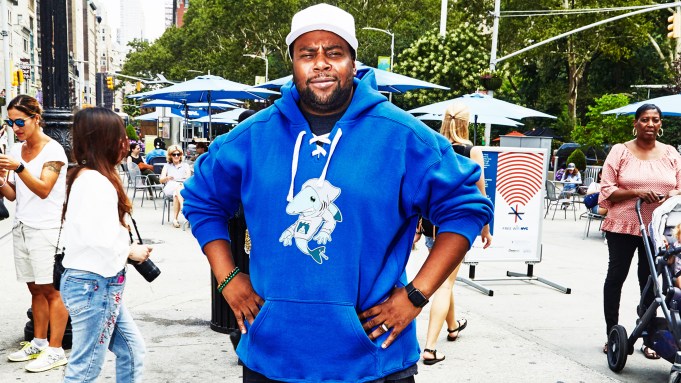 NEW YORK — Kenan Thompson has been making people smile for as long as he can remember. And the longest running cast member of “Saturday Night Live” is hoping that his first foray into fashion will do the same.

“I love comfy clothes and I like cool art, so I got a buddy of mine, Michael Mosley, to design me some cool new characters: We have a whole cavalcade of characters that are ready to be placed on hats and shirts,” he says on the video promoting the line. “Putting out some cool new threads for you guys makes us smile and we think it’s going to make you smile, too.”

During a chat in the Flatiron District here, where he willingly mugs for the camera and embraces his fans — “I’m very approachable,” he says with his trademark “What’s Up With That” dry wit — Thompson says the whole idea behind the line is to promote artists and put them to work “so they can receive proceeds directly from the pieces of their art that are selling.” Calling it a “Comic-Con version” of a business plan, Thompson hopes to build a community where “fans can come and participate in something from the ground up. Hopefully it’ll turn into something: a property of this incubated artistic community. That’s the goal.”

The line is targeted to both children and adults and everything is made in the U.S. This decision meant the prices aren’t cheap — to get in on the action, pledges for T-shirts are $49 and hoodies, $99 — and Thompson admits they may have to be adjusted down.

The line will also have a charity component, although he says Kickstarter doesn’t allow that to be included on its site. Smile Parade plans on donating to My Stuff Bags Foundation, which provides kids entering shelters or foster homes with toys, books, clothes and other necessities.

With his long career in television — the Atlanta-born Thompson began acting at 15, was an original cast member of Nickelodeon’s sketch comedy series “All That” and also appeared in its “Kenan and Kel” series — people wonder why he opted for Kickstarter instead of investing his own money. “Call Lorne, tell him to loosen the strings,” he says with a laugh, referring to “SNL” creator and producer Lorne Michaels. More low-key than one might expect from a life-long comedian — he says New Yorkers generally don’t bother him in the street, especially when he’s wearing his Atlanta Braves cap — it’s obvious that he takes his career seriously.

When launching Smile Parade, Thompson says his accountant told him to “figure out a way to do it that can pay for itself. It’s also a great way to test to see if what you’re thinking is even appealing to anybody, that’s the main objective.”

Starting a business this way is “low risk and high reward,” he adds. “If it does take off, it’ll be already loved from the beginning. It’s like target fandom.”

Although he’s hopeful it will connect with customers, Thompson says: “It’s out of my hands now. It’s up to the people whether they want to do it or not. It’s not like I want to force hoodies down people’s throats.”

In fact, Thompson admits that he’s not much of a follower of fashion, saying: “I went to fashion week one year and I was amazed by it. And I thought, ‘Wouldn’t it be nice to be a fashionista?’ But I gave up on that really quickly.”

In fact, he admits: “I was slightly overwhelmed by it because I’d never seen so many paparazzi hidden in one corner. On the red carpet, they’re right there, but this was the most Illuminati-type experience I ever had; it was really cool.”

In terms of his own experience with fashion, Thompson says his “first memory is the difference between wearing your Sunday church suit and your everyday clothes. There’s a difference in attitude when you put that Sunday suit on. It’s in your mind to behave differently when you sharpen yourself up. When you’re casual, you just tend to stay casual with your disciplines — maybe your manners or motivations will slip, I’ve been guilty of all of that. When you pay attention to details in your clothing, you pay attention to your whole life, which is a good thing. But I’m more into comfort. I like T-shirts, shorts, baseball caps.”

But he does enjoy slipping into the occasional tuxedo. At the request of Michaels, he attends a fund-raiser for the Museum of Natural History in the fall. “Everyone has to wear black tie and sometimes it’s kind of cold, so I wear a three-quarter trenchcoat and it makes me feel like a full-on movie businessman. It’s classic New York and it’s cool, but it’s not for me everyday.”

While he’s able to put aside his tuxedo for a while, he’s gearing up for the next season of “SNL.” “Weekend Update Primetime Summer Edition” starts airing Aug. 10 and Thompson reveals that’s his favorite part of the show. “A whole sketch has to be an A, B, C-type story, but this is more like standup, you’re going for hits. It doesn’t have to make a lot of sense. It’s the most fun part of the show for us.”

But over the course of his long career at “SNL,” Thompson has learned that it’s not all fun and games. Since the election of President Trump, he feels like the show has become “America’s big brother.” He said “SNL”is “notorious for “life goes on” things. After 9/11 was maybe their biggest moment. And this election was probably number two. I just never felt such an air of such hopelessness before — everybody was so lost and downtrodden. But Dave Chappelle [who hosted the show the weekend after the election] was amazing. I never witnessed a monologue that powerful. People were listening as opposed to waiting for a laugh moment.”

Even so, Thompson always gravitates back to the laugh moment and he expects to do that with a new project that was revealed earlier this week. He’s teaming with former Nickelodeon president Albie Hecht to create a new live-action sketch comedy for kids called “Skoogle.” Thompson, who is also executive producer, says he was “insanely flattered” to be called in to develop the show.

But for Hecht, it was a no-brainer. He calls Thompson “a comedic genius. At Nickelodeon, I witnessed first-hand Kenan and his fellow cast members’ ability to turn everyday scenarios into hilarious adventures. I’m very excited to have the opportunity to once again re-team with Kenan and bring premium sketch comedy to a new generation of fans.”

Although “Skoogle” is now in the spotlight, the 39-year-old Thompson is quick to put to rest rumors that this new show may mark the end of his “SNL” career.

“I’m not in any rush to get back to auditioning and that kind of stuff. Why wouldn’t I stay in this awesome place and help make a great show fresh and new every week? It’s not a place you go running away from.”

But with “SNL,” the new “Skoogle” show and Smile Parade, it’s going to be a busy fall for Thompson.

“It ain’t enough. I need 50 more different products,” he says. “I don’t have to do it all, we start something and then we put people in place and it grows from there. I’m all about bringing people together — I’m a ‘companionator’. I stole that from ‘Sons of Anarchy.’”