A guide to what's happening right now in art, music, theater and food in New York.

By Marshall Heyman and Anamaria Wilson

Worth the hop, skip and jump from the Bryant Park tents, at... 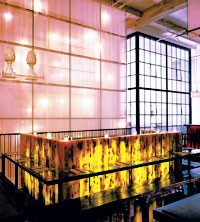 A guide to what’s happening right now in art, music, theater and food in New York.

By Marshall Heyman and Anamaria Wilson

Worth the hop, skip and jump from the Bryant Park tents, at Mario Batali and David Pasternak’s just-opened Bistro du Vent, 411 West 42nd Street, diners can pop in for some poulet and a pichet at the bar. Though not yet open for lunch, the 2 a.m closing will allow you to deconstruct the Anna Sui show for hours after it ends.

For a more sumptuous environ, Patricia Yeo has melded modern French and Southeast Asian cuisine at Sapa at 43 West 24th Street. Try the cocoa and peanut-glazed spareribs, or seared scallops with truffled cauliflower puree as you bask on the white leather sofas, snakeskin covered chairs and dark colonial woods.

If that all sounds a little too Gucci, hit Employees Only, a hard-to-find hipster joint with an unmarked facade at 510 Hudson. The inconspicuous entrance gives way to a cozy interior — tin ceilings, wood paneling and a fireplace — that matches the hearty cuisine of steak tartare and osso bucco. The exclusionary moniker is fitting given that the owners can often be found working the room, from the bar to the coat check. Co-owner Billy Gilroy’s motto, after all, is “no bosses.”

Forget Paris, Chloë and Lindsay. Today’s party girls don’t hold a candle to one of fashion’s most famous Its — Edie Sedgwick. Reportedly, Sienna Miller will play her in a feature film called “Factory Girl,” but in the meantime, the next generation of fashion fiends can check out the exhibit “Edie Sedgwick: Unseen Photographs of a Warhol Superstar,” at Gallagher’s Art and Fashion Gallery on Fourth Avenue.

“We all went through an Edie phase,” says curator David Wills. “It’s kind of a rite of passage for people in fashion.” A Sixties film buff, Wills tracked down 60 unpublished photos from 11 photographers, including Paul Morrissey and Billy Name, two members of Warhol’s infamous Factory. The pictures show Sedgwick applying makeup, dancing in a bikini and posing with a little dog. The centerpiece is never-before-seen film footage shot by David Weisman and John Palmer, co-directors of “Ciao! Manhattan,” the cult classic semifictional account of Sedgwick’s life. The footage will also appear in “Girl on Fire,” Weisman and Palmer’s forthcoming documentary about Sedgwick, to be released in November.

At the exhibit’s opening, last week Sedgwick’s niece, Misha, an aspiring actress, sported the Betsey Johnson “Paraphernalia” dress that her aunt wore on the set of “Ciao! Manhattan.” When the dress arrived from Johnson’s office, “it was treated like the Shroud of Turin,” says Wills. Not prone to sit any Warhol-era party out, the evening drew a bevy of superstars, including Veruschka, Taylor Mead, Geraldine Smith and the unstoppable Sylvia Miles. — Roxanne Robinson-Escriout

“Hurlyburly,” the latest Off-Broadway sensation, might be memorable more for its linguistic pyrotechnics than its fashion moments. Still, the costumes for the revival of David Rabe’s 1984 play were designed by Jeff Mahshie, designer of the sportswear brand Chaiken. Besides reading vintage issues of GQ, Vogue and Cosmopolitan, Mahshie made a “sweep of every vintage store in New York City” to come up with looks for Bobby Cannavale, Ethan Hawke and Parker Posey, whose outfits, shown in sketches here, could take her off-stage to any flashy event in Manhattan. “You have to go a little deeper when you’re working on a character,” says Mahshie. “In a fashion show [a model] just needs to be pretty, her motivation on why she is wearing what she is wearing isn’t as relevant.” As for working on the play, which is rumored to be moving to Broadway, he says it hasn’t influenced his fall Chaiken collection, at least not in a literal way. “You won’t be seeing any ‘Flashdance’ T-shirts.”

If you long for the days when fashion week was actually about the clothes rather than the runway spectacle, a trip to the Pratt Manhattan Gallery’s exhibition, “Cut and Construction: The Foundations of Fashion,” will soothe the senses. Showcasing designers as diverse as Cristobal Balenciaga, Ralph Rucci and Junya Watanabe, the show begins with Madeleine Vionnet’s revolutionary designs in the late 1910s and ends with Narciso Rodriguez’s modern interpretation of flou to explore draping, sculpture and ornamentation through fabric manipulation.

The bosozuki, members of Japan’s teen motorcycle gangs, roar into the Meatpacking District to Masayuki Yoshinaga’s photo exhibit at the M Wakasa Gallery. For the last eight years, the Tokyo-based artist has taken as his subject the bosozuki’s culture of big bikes, over-the-top outfits and breathtaking speed. Yoshinaga also documented their unique fashions: the gold embroidered uniforms, chrysanthemum crested headbands, and custom-made motorcycles.

For a shot of the bizarre and otherworldly, check out the Tim Hawkinson show at the Whitney Museum of American Art. Highlights include sculptures of birds created out of the artist’s very own fingernail clippings and another of a garishly enlarged fingertip.

As a new service to its guests, the Soho and Tribeca Grand Hotels are lending out iPods with 200-song playlists “curated” by Michel Gaubert, the world-famous music producer who will create catwalk soundtracks for Proenza Schouler and Michael Kors this season and makes compilation CDs for Colette in Paris. Here’s a sampling of some of his favorite tracks, because if you’re staying at the Royalton, you can always download.

TV ON THE RADIO, “Staring at the Sun”

THE BLACK KEYS, “Till I Get My Way”

SCISSOR SISTERS, cover of FRANZ FERDINAND’s “Take Me Out”

The best show in town right now might be “The 25th Annual Putnam County Spelling Bee,” a remarkably original and heartfelt musical about the pandemonium experienced by a group of overachieving, overactive youngsters competing for a spot at the Nationals. There’s the nerd with a “magic foot” that helps him spell, an Asian tot who’s tired of excelling at everything, a grade-schooler with a lisp and two daddies and, ultimately, a few life lessons that even the most curmudgeonly grown-up will appreciate. Music and lyrics are by William Finn of “Falsettos.” (Second Stage Theatre, 307 West 43rd Street, 212-246-4422.)

For something a little more stylish, there’s The Wooster Group’s “House/Lights,” directed by Elizabeth LeCompte, which, after a run in 1999, returns for an engagement at St. Ann’s Warehouse in Dumbo, Brooklyn. Using audio and video techniques the group has perfected since it was founded in 1975 by the likes of Spalding Gray, Willem Dafoe and Kate Valk, the theater piece merges Gertrude Stein’s opera libretto, “Doctor Faustus Lights the Lights,” with Joseph Mawra’s 1965 B-film classic, “Olga’s House of Shame.” (St. Ann’s Warehouse, 38 Water Street, 718-254-8779.)