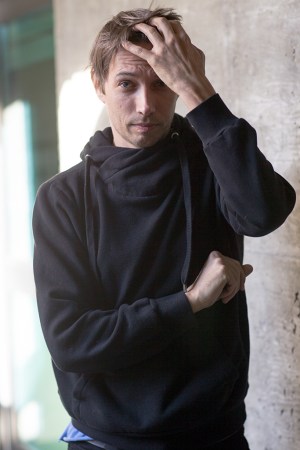 When director Sean Baker started working on his film “Tangerine” two and a half years ago, Caitlyn Jenner was still Bruce and Time magazine hadn’t published a cover story proclaiming transgender issues the next civil rights frontier.

But his well-meaning and raucous dramedy about two transgender workers in downtown Los Angeles is arriving in theaters just as the subject of trans-America is at the forefront of the national conversation.

“I live in West Hollywood and I know many trans-advocates and I kind of had a sense that there was something brewing at the time,” he says. “But it’s really Caitlyn who’s pushed it into the stratosphere because she’s one of our biggest celebrities transitioning.”

The stars in “Tangerine,” which premiered at the Sundance Film Festival and will be released Friday, are not Jenner-level celebrities. In fact, they’re not even remotely famous. Baker found Kitana Kiki Rodriguez and Mya Taylor while scouting the “unofficial red light district” at the intersection of Santa Monica Boulevard and Highland Avenue.

At that point he didn’t even have a story in mind, instead diving into the subculture to collect anecdotes and inspiration for the screenplay. After a handful of hangout sessions at a Jack in the Box, Rodriguez eventually supplied the plot for the fledgling film, based on a true scenario that never fully played out: It’s Christmas Eve and her character, Sin-Dee Rella, has just finished a jail sentence when she finds out her boyfriend — and pimp, natch — is cheating on her, with a biological woman no less. She and her BFF, Alexandra, are then on a mission to track down the other woman.

To realistically portray the underworld of the two characters, Baker, a native New Yorker who last directed Dree Hemingway in “Starlet,” returned to a practice he had used on two earlier films, “Take Out” and “Prince of Broadway,” that also covered unfamiliar terrain. “I go through a long research process because I’m not from those worlds normally,” he says. “We’re at a time right now where sensitivity is really through the roof. Me being a cisgender [or nontransgender] white male, some people will have a problem with me tackling these subjects. There is that white privilege that I have to be aware of.”

Bringing in first-time actors also helped enhance the film’s authenticity. “I have to basically answer to those individuals. In this case I have to answer to Mya and Kiki. And if I have done right by them, then I feel I have done the right thing,” Baker says.

The actors are not the only reason “Tangerine” has critics talking. Baker filmed at real Los Angeles locations, like Donut Time, using only his iPhone 5S, so that most of the time, customers didn’t even know they were being filmed.

“I wish I could say that it was all planned, but it was more to do with the budget,” he says. “We were actually kind of, quite honestly, ashamed about doing it. Budgets aren’t coming, they’re being slashed in half, so if that’s where the industry has put us, I can either complain for the rest of my life or I can just keep making movies with the hope that one of them will break. I thought this was the year that we were going to see many films at Sundance shot on the iPhone, I was surprised we were the only one.”

Luckily for him, it’s one feature that has helped his little indie with two nontraditional leads stand out amid a movie season crowded with blockbusters and expensive star vehicles. And in the process, it’s added to the chorus of support for the trans community.

“It’s a film about L.A. more than it’s about the movement, but it’s a wonderful thing and my hope is that Mya and Kiki will be embraced by the industry,” he says.