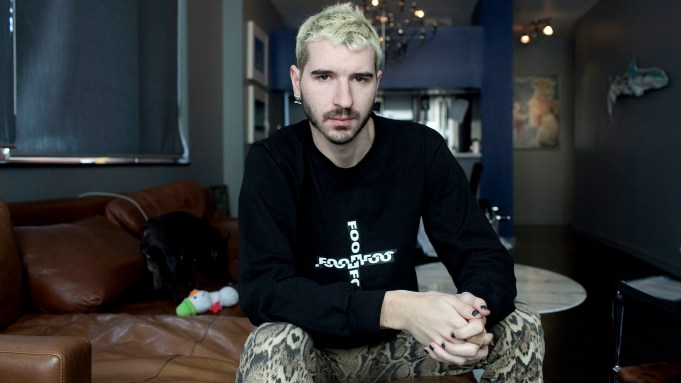 “I came out this week to my mom — as a memer,” says Sebastian Tribbie, professional meme maker.

“I never wanted her to know what my Instagram was because it’s very controversial, because it shows how much I party or go out, and there’s, like, drug memes,” he continues. “There’s just so much press coming out with me lately that I’m, like, there’s no way she’s not going to know.”

Tribbie is one of the contributors to the #TFWGucci campaign. His Instagram account @youvegotnomale has more than 45,000 followers as of press time — which has attracted the attention of corporate clients and has led to commissions for memes promoting products. The types of companies utilizing Tribbie’s memes range anywhere from fashion brands, like Gucci, to tourism companies, like “the Tourism Board of Anguilla — making memes to make people want to travel to Anguilla,” he says, from the couch of his Hell’s Kitchen apartment.

“My doorman out there, I get judged so hard because I come home late,” he explains of his digs, under-eye bags ablaze. “It’s just, like, I hate it, but I get my packages. I shouldn’t complain. It comes off very bitchy.”

His unconventional career in “experimental marketing” had comedic beginnings. Tribbie started working in New York four years ago, “Doing stuff with, like, Amy Schumer and Rachel Feinstein, basically deciding who goes on stage.” He has since parlayed his irreverent nature into Internet gold, cropping photos into collages on his phone. “Making memes, I love it. I can do it anywhere. I make everything on my phone. I don’t own a computer,” he says.

Tribbie’s Instagram posts, some corporate-affiliated, others not, encompass all aspects of pop culture. He’s compared Vetements hoodies to the ponchos at the inauguration. He’s called scarves “a gay man’s security blanket.” He’s even posted selfies with his mini French bulldog, Morticia. But his most popular type of meme is by far the “starter pack,” a collage of photos that embody a certain stereotypical persona.

His original “The ‘GUCCI’ Starter Pack,” which he posted prior to #TFWGucci, included photos of Petra Collins, a vintage BeDazzler and a line of cocaine. “The originals were so much better,” he says. “It’s just they were too controversial.” The official #TFWGucci starter pack is a toned-down version of the original, but does include some of Tribbie’s signature sass. “My starter pack was one of their most prevalent [memes],” he says with a snap of his fingers. “Like, Hari Nef is called basically a mean girl for the entire world. But, Hari’s sweet,” he adds.

Tribbie’s involvement in #TFWGucci has launched his career to new heights, and he’s worked with “six to eight” new clients since the campaign went public on March 17th. But not all of the attention is positive. “We got a lot of backlash for it,” Tribbie explains. “I got into a screaming argument with somebody about it. They were like, ‘How dare you make Internet culture, like take that away from us.’ I was like, ‘Um, I do this for a living.’”

Tribbie ascribes others’ negative reactions as manifestations of “jealousy” for the campaign. “It’s such a good idea,” he says of the initiative. “I’m sure other brands are going to pop right on.”

But, the success of the timepiece-focused campaign has a lot to do with Gucci’s brand in particular, according to Tribbie. “It’s Gucci. So, it already has that feeling of fun because it’s like a bee or a tiger, and then interchangeable straps. Memes are very specific, and their watches are very specific to a certain type of person,” he gushes of the collection. “Like, when I was trying to pick out which watch I wanted, it took me a very long time because I was thinking, like, ‘Well, I’ll probably be too stoned one day and there will be a bee or a snake on me, and I will freak out like looking at my watch.’ So, I went with the tiger.” Ah, the perks of being a pro memer.

Tribbie’s free-spirited freelance career may seem lawless, but he does have one rule. “I don’t follow anyone who doesn’t follow me back. That’s my rule,” he says. “They have to follow me.”