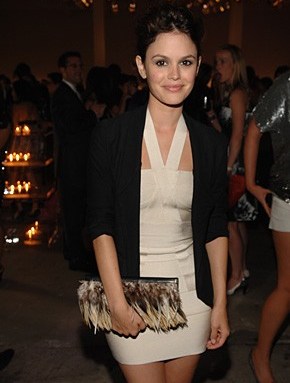 Sophomore efforts are always tougher than a first try. But Max Azria didn’t seem to have any qualms about co-chairing and hosting the Whitney Museum’s annual Art Party for the second year in a row, at the same location – Skylight Studios – no less. “I wanted to improve it, get more people,” explained the designer, decked out in a vintage Panama-esque hat and pinstriped suit. Gone was last summer’s hippie chic theme and décor and in its place a huge disco ball; a ceiling of purple woven fabrics and sleek leather and fabric sofas, all of which drew a crowd including Gretchen Mol, Jason Wu, Joy Bryant, Eva Amurri, Monet Mazur, Eli Manning, Barbara Bush, Coco Rocha, Behati Prinsloo, Elettra Wiedemann, Ann Dexter-Jones (showing off bracelets from her forthcoming jewelry line) and even Lou Doillon. Co-chair Rachel Bilson was hoping for a little education from the silent auction works on display by the likes of Cecily Brown, Taryn Simon and Will Cotton. “I respect what they do so much and I want to get to know them better,” she said.

Lubov Azria, though, seemed a bit perplexed by the offerings. “I am art shopping, but I don’t really understand some of these,” she admitted, eyeing the walls.