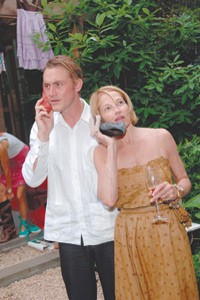 You never know what’s behind closed doors in New York. In the case of the West Village home of Lorraine Kirke, owner of vintage boutique Geminola, it’s a lavender-filled backyard idyll that the laid-back designer threw open to neighborhood friends such as Julianne Moore for tea and Pimm’s cup on Tuesday afternoon. Layer cakes, piles of scones, dainty tea sandwiches and cups of clotted cream were in abundance, as were Kirke’s frothy dresses, which were hung from the rafters and draped over lounge chairs. The tempting treats proved too much for Ellen Barkin to resist. “Ellen wants to know where the 50 percent-off bin is,” said Kirke’s husband, Simon. “In her dreams, should I say?”

But the actress, who arrived with her teenage son, Jack, had already moved on. Along with Antony Langdon (Liv Tyler‘s brother-in-law), she was playfully pretending that the Tashkent ballet flats strewn about were phones, despite the Edward Scissorhands-like bandages on her fingers from a recent burn. As dusk descended, Uma Thurman arrived, and she and Barkin grabbed a corner seat for girl talk, champagne and cigarettes.

On Tuesday night in London, hundreds of revelers turned up at the annual party to fete the Serpentine Gallery’s summer pavilion. “So, do you like my new home?” asked Stefano Pilati, gesturing to the inflatable white dome that Rem Koolhaas created for the gallery. “It’s like a loft, no?”

Pilati and Yves Saint Laurent hosted the cocktail soiree, creating a send-up of the traditional English garden party with pink everywhere, from the huge, wooden, logo-ed flowers to the models dressed in taffeta tunics and sky-high wedges.

The artsy crowd — Damien Hirst, Grayson Perry, Rachel Whiteread, Zadie Smith, Alain and Charlotte de Botton — arrived on time, but the jet-setters were not so prompt. Juliette Lewis arrived after she took her bow at the play “Fool for Love,” currently playing in the West End; Matthew Barney flew in late from Los Angeles, and Mischa Barton, who’s studying at London’s Royal Academy of Dramatic Art, showed up after her last class of the evening.

The YSL press team had been busy, too, dressing Kristin Scott Thomas, Tilda Swinton, Sally Albemarle, Elle Macpherson, Stella Tennant, Linda Evangelista, Diane Kruger, Claire Danes and Fiona and Olympia Scarry. “We’re dueling for one another’s clothes,” said Liz Goldwyn, who was draped in a YSL cape made of roses. She was staging a sword fight — with the pink wooden flowers, of course — with Amira Casar, who squealed, “I want that cape.” The sometimes-sinister Swinton found another potential use for the wooden flower stakes, which guests took home with them. “I think I’m going to use mine to … sacrifice a child,” she declared.