Everyone in the fashionable crowd at Monday night's Chanel Beauté-sponsored Cinema Society screening of "Atonement" is probably familiar with little white lies. 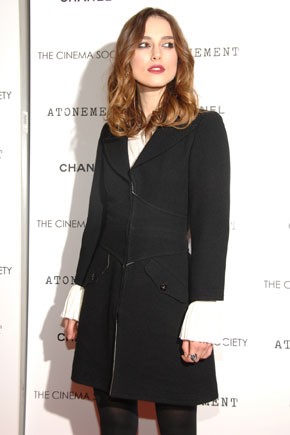 Everyone in the fashionable crowd at Monday night’s Chanel Beauté-sponsored Cinema Society screening of “Atonement” is probably familiar with little white lies (“Oh you look faahbulous!”). But hopefully they haven’t faced the heart-wrenching consequences of a tragic falsehood, like the one at the heart of the Ian McEwan novel, on which the film is based. Still, one has to wonder, what’s the worst untruth the film’s stars have ever told?

“I’m certainly not going to share that with you!” exclaimed a horrified Keira Knightley. Translation: it must have been a doozie.

Her romantic co-lead James McAvoy was more forthcoming about his own blemished past. “I once told my younger sister I was dead. I convinced her I was my own ghost,” explained McAvoy, whose acting chops clearly began at an early age.

Director Joe Wright, however, had more weighty matters on his mind. As he explained to the crowd packed into the IFC Center, he endured some hurdles in making the film because of a certain four-letter, c-word that figures rather strongly in the book’s story. But he stood his ground, refusing to let the more PC v-word (that would be “vagina”) take it’s place.

“We are only going to make this picture on one condition,” he recounts telling a wary executive. “That the c–t stays in the picture.”

Afterward, guests repaired to Balthazar, where McAvoy and Knightley (and beau Rupert Grint) hid out in a corner banquette as Rufus Sewell, Rosamund Pike, Rob Thomas and Eva Amurri feasted on french fries, mini burgers and crab cakes late into the night.