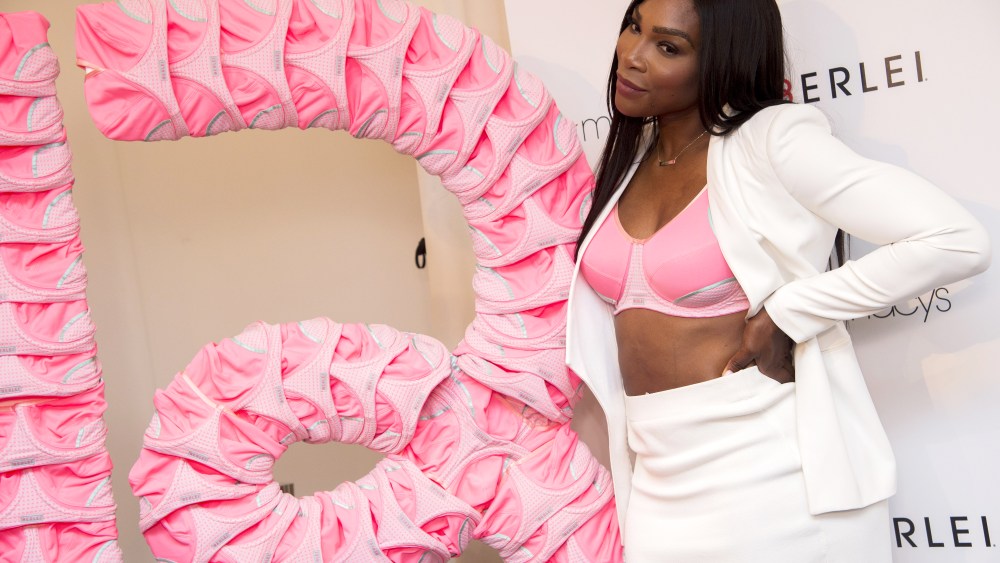 Serena Williams bristled when asked if she feels like she needs to redeem herself after her surprise losses in the Olympics. “I don’t have anything to prove — ever,” she said with a laugh.

With a tennis career that is unparalleled, that’s probably true. The 34-year-old, who is currently ranked number one in women’s singles and considered by many to be the greatest female player of all time, has a total of 22 Grand Slam titles on her own and 14 with her sister Venus. She’s won four Olympic medals and was named Sportsperson of the Year by Sports Illustrated last year.

But on this day, Williams was at Macy’s helping her favorite sports bra manufacture, the Australia-based Berlei, make its U.S. debut. Dressed in a striking Alice & Olivia two-piece white suit — untied to better show off her pink Berlei sports bra and six-pack abs — Williams posed for photos and signed autographs for her adoring fans as she geared up for her appearance at next week’s U.S. Open. Williams took some time out to visit with WWD before the appearance.

WWD: How long have you been involved with Berlei?
Serena Williams: I’ve been involved with Berlei for almost my whole career. I actually discovered them well over 10 years ago, probably 2002 at least. My mom introduced me. She said, “Listen, you should try these bras.” And I was like, “Really?” So I tried it and since then I’ve never worn another bra. That says a lot about the product and the quality. I’m a big supporter of this product for women. And [my relationship with the brand] was so organic. I would go to the store and buy 40 or 50 bras every year because I could only get them in Australia at the time. And then eventually they heard that I would come and take all the stock.

WWD: Are you involved with the design of the product too now?
S.W.: I got involved in the design process a long time ago. I’ve been working with their main designer for a while. It’s been really fun all around.

WWD: What do you feel you’ve brought to the brand?
S.W.: I think the better question would be: what they brought to me. I feel like they’ve brought me so much for my career. In the locker rooms, I’m always suggesting, “You need Berlei.” Because it’s the best brand for women and for me. I’m a high-performance athlete: I’m running, I’m sprinting, I’m sliding, I’m doing pretty much everything and the last thing I want to worry about is my chest. I want to just worry about playing the sport at the highest level that I can.

WWD: You have your own collection on HSN but you don’t do sports bras. Why not?
S.W.: We do more ready-to-wear and ath-leisure, things you would wear everyday. I never close my mind to anything and eventually want to branch out. But for now, tennis is still number one for me.

WWD: Will you be at New York Fashion Week?
S.W.: Yes, we’re showing and I’m really excited about that.

WWD: Your sister also has a fashion collection. So whose line is better, yours or Venus’?
S.W.: Venus has an amazing line; I love her collection. I’m always at her office. She has an interior design company and her EleVen company. They have a wonderful office space and I’m always there for the interior part and get to see what she’s doing with EleVen. I love it, I think it’s really amazing what she’s doing with that.

WWD: So no competition between you two?
S.W.: We’re in different categories. She does sports, I do more of the fashion side.

WWD: You’re known for your fashion sense, both on and off the court. What do you like to wear and how do you describe your style?
S.W.: I like to wear classic silhouettes and add a punch to it. I’ll wear a high-waist legging and a super-crop top or a see-through top with a nice bra underneath. And I just always try to mix it up with heels or something.

WWD: How do you think you’ll fare in Flushing?
S.W.: I don’t go there thinking I’m going to lose. I never go into a tournament thinking that. I’ll do the best that I can. I need to be at my peak and my best is holding up the trophy. Anything less I wouldn’t be really excited about. So that’s all I can focus on.