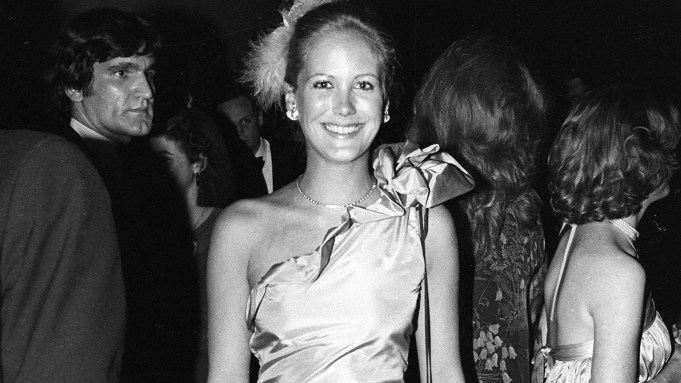 Services will be held Wednesday morning at St. James Church in New York City for Nina Griscom, who died Saturday at the age of 65.

Effervescent and direct, the platinum-haired Griscom bridged the worlds of New York society, fashion, design, charity and media, continually reinventing herself. With a pedigreed upbringing and first-rate education. Griscom took New York by storm without ever taking herself too seriously. Fashion designer Carolyne Roehm described her Monday as “a fabulous gal, who was never boring. She always had the quick wit and all of that. We had a lot of great laughs together.”

The former model befriended Bill Blass and Oscar de la Renta. Years later she incorporated finds from her overseas travels and sold them in her signature Upper East Side and Hamptons boutiques. She dabbled in handbag design, too, launching her own American-made collection six years ago. Her design ethos was as no-nonsense as ever — “I’m not interested in things with a whole lot of garbage on them, and I am certainly not interested in logos,” she said.

Griscom also wrote extensively about entertaining. During a talk with Michael Kors at Bergforf Goodman in 1997, she said, “I like things to be billlow-y. Big, voluptuous pale roses, open windows with drapes billowing, wooden floors creaking. Food should be really simple and basic. And since you’ve been going to the gym for months to show off this body, and the bulges won’t start showing until after fall, I say pack it in.”

“I had just come from the theater with my beau to the new hot restaurant in New York. We’re talking about the Seventies. We were having dinner. We were a good-looking couple and all of that. All of a sudden in blows two guys and two girls. They were dressed in gold and they had these huge manes of gold hair. They were are all so great-looking. I just thought, ‘Wow! Now that’s New York glamour.’ You just knew the real golden girl was Nina. I felt like such a little brown wren.”

Within the next year Roehm met Griscom and they became friendly. “At first just yacking about men and who the beau of the moment was and all of that. Both of us changed them several times. Another thing that brought us together was her mentor was Bill [Blass], who was a second mentor to me. And mine was Oscar [de la Renta] and because Oscar and Bill had a relationship, Nina and I also had our relationship as kind of admiring young women to great names in the fashion industry. When I showed my first collection in 1985, Nina wore some of my clothes. She even modeled for me — not as a paid thing. If Town & Country or one of those magazines wanted to photograph my clothes on a friend, Nina would do it.…Here was this beautiful woman. She could have a sarcastic mouth or whatever but she was just this blend of brains and great looks.

“When she did her store on Lexington Avenue, the products she had in it were definitely a reflection of her own homes and her aesthetic. That was tied to a mixture of African motifs, horns and those kinds of things. She was very true to that in her personal style in her homes but also in her charitable work. There was a consistency to her.”

Restaurant critic Alan Richman, cohost of “TV Diners” and “Dining Around” with Griscom on the Food Network in the Nineties

“She was so fabulous on the air. She was poised, gorgeous and photogenic. Do you know what a great voice she had? For a long time, if you called the restaurant Le Bernardin, her voice was on the answering machine. I don’t know how they did it or why they did it. But I know if I had done it, I would have at least asked for a free meal. But I don’t think she did that.

“The reason I got this job was because the people of the Food Network really wanted to get a show for Nina. They were trying to find someone that she liked. I had not met her before this. They brought me in to see if we would work out well together. She was the Lone Ranger and I was Tonto. We just got along so well. It wasn’t as though I was stunned by her beauty. It was the opposite — she was so beautiful I realized that she was out of my league. We were just buddies.

“The thing I loved about Nina was there was no pretension. We couldn’t have been more different between our upbringings, our styles and she was so kind to me. She invited me to her house in the Hamptons. She was at the peak of society. She took me to the parties people were having there — she didn’t like them any better than I did. She just accepted me and asked nothing of me. We had dinner with her mother [Elizabeth Rohatyn] and her stepfather Felix Rohaytn. This was the man who saved New York [City from bankruptcy in 1975] and was U.S. ambassador to France [as well as Monaco]. I just adored her. She really had a lot of simplicity when she was away from the society that she lived in.”

“My wife was a free spirit. She was extremely caring, giving and charitable. She was very generous with her time and always trying to make everybody feel included. She was involved with many boards including Empowers Africa and Teaching Mothers, an organization that her mother Elizabeth started.”

The couple met because they lived in the same East Side neighborhood, Piraino said. “We started to see each other and from there it took it off. I think it was the simplicity of a man and a woman liking each other. We didn’t know anything about one another, and yet we fell in love and we lasted until the end.

“Some people she helped with their careers. Some friends she visited in the hospital when they were ill. She just tried to be there and do everything in her powers to help others. If you were to ask people, everybody would have a different scenario about how she made their life somewhat better. My wife was extremely helpful, extremely smart. She could interview a eunuch in India or talk to Henry Kravis. She felt comfortable in every scenario. She was extremely kind and made everybody feel included and comfortable in different social classes — if there is such a thing — or economic classes. To her, it didn’t matter.”

“I knew Nina for almost my entire career in New York. She was very influential and very passionate and supportive of the restaurant industry. We enjoyed many lunches together at Le Bernardin — she loved fine dining and had impeccable taste. And it was a real honor to have her as ‘the voice’ of Le Bernardin.”