Sex, Sun and Survival: A Look at Chanel’s Charmed Life in the War Years

Anne de Courcy examines Gabrielle "Coco" Chanel’s gilded milieu — and her demons — in a book set between Paris and the French Riviera before, and during, World War Two.

LONDON — Mademoiselle Chanel — her radical fashion, business nous, complicated past and chutzpah — have mesmerized many, whether or not they covet the tweed, pearls or perfume.

Chanel’s artistic director Virginie Viard, who shows her fall 2020 ready-to-wear collection today, has been liberally referencing the founder in her collections, with runway sets recalling Chanel’s convent school, her Paris apartment and the zinc-lined rooftops of Paris’ Rue Cambon where she first set up shop, and where Chanel’s couture salons remain.

In her latest book, “Chanel’s Riviera: Glamour, Decadence and Survival in Peace and War, 1930-1944” (St. Martin’s Press), Anne de Courcy looks at another important period in Chanel’s life — the time she spent on the Côte d’Azur before and during World War Two.

In those years, the world’s most famous dress designer was up to nothing — and everything, according to de Courcy, a journalist and non-fiction author. 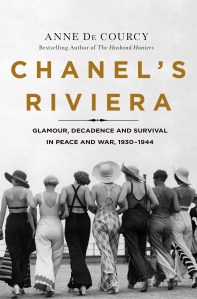 In 1930, the fabulously wealthy Gabrielle “Coco” Chanel bought, rebuilt and decorated La Pausa, her villa above Roquebrune, when she was still the lover of, and trying to have a child with, the Duke of Westminster. There she entertained, lavishly surrounded by swathes of beige silk, white taffeta, bowls of white lilacs and antiques from the duke’s various attics. She developed her famous suntan smashing balls around the tennis court, or lazing on the beaches by Menton, and out-dressed everyone with her ropes of pearls, Breton tops and espadrilles.

Friends, acquaintances, lovers and guests in those years were a roster of mid-20th-century  pop culture: Jean Cocteau (Chanel designed costumes for his plays, and regularly dragged him into rehab for his opium habit); the disgraced — and navel-gazing — Duke and Duchess of Windsor; Igor Stravinsky; Sergei Diaghilev, and Salvador Dalí, one of Chanel’s many lovers over the years. Winston Churchill, who was also on the scene, adored Chanel, telling his wife Clementine the designer was “fit to rule a man or an empire.”

Rich, independent and haunted by a horrific childhood, Chanel certainly was a woman in charge. Despite the everyday horrors of war — the hunger, the stalking and torture by French and German troops and the deportation of the Jews to the death camps — Chanel was determined to continue living her wonderful life, and to get ahead, during the war years.

Although she, like most others, wanted the war to end, she saw the conflict as a golden opportunity to seek her revenge on the Wertheimer family, whom she argued had cheated her out of her fair stake in Chanel No. 5. The conflict never stopped her from behaving like the mogul, power broker and aesthete she believed herself to be. 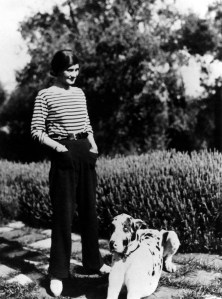 Gabrielle “Coco” Chanel photographed at her Home, Villa La Pausa In Roquebrune, France, with her dog, Gigot, around 1930.  Granger/REX/Shutterstock

“While she was both pro-British and pro-French, she was above all pro-Chanel,” writes de Courcy. “Having hauled herself up from a background of which she appears to have been ashamed…to achieve the life that she had designed for herself, she was not prepared to see it obliterated if she could help it.”

The author goes on to describe Chanel’s view of the world as “profoundly solipsistic,” adding that all she wanted was to go on living as she wished, seeing her lover and her friends. While much has been made of Chanel acting as a spy for the Germans (her lover during the war was the young, handsome German diplomat and secret agent Baron Hans Günther “Spatz” von Dincklage), de Courcy is buying none of it.

She argues that Chanel’s pillow talk with her German lover contained nothing of real value to the Nazis. Besides, knowing Chanel, spying would have been far too lowly a task. In the book, de Courcy highlights a telling episode in which the designer thought she could broker an agreement between the Allies and Axis powers by convincing her pal Churchill to “hold out a hand in peace” to the Germans, and end the war.

The plan, which de Courcy describes as “breathtaking in its audacity no less than in its belief in her own powers,” never came to fruition as Churchill was taken ill in Tunisia, and had to miss the great meeting, which Chanel had helped to set up in Madrid.

Though clear-eyed and critical of Chanel, de Courcy also has much admiration for the designer, underlining her loyalty and generosity to friends and family alike, and her single-minded determination. 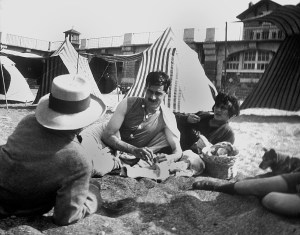 Coco Chanel and her lover Arthur “Boy” Capel on the beach in Saint-Jean-de-Luz, France, in 1917.  Courtesy of St. Martin's Press

“She overcame the most difficult background you could imagine. She was, after all, the illegitimate daughter of a disreputable market trader. Her mother died when she was 11, her father dumped her and her sisters in an orphanage. I think it was a miracle she wasn’t institutionalized,” says de Courcy over a cup of coffee in her bright Chelsea kitchen. “She spotted — and seized — opportunities when they were well below the horizon, and she changed the shape of fashion.”

Chanel wasted an opportunity. In 1944, after the Liberation, she was kidnapped — briefly — by members of the resistance who accused her of collaborating. They freed her after a few hours — no one knows how or why — but de Courcy speculates that it was opportunism, in part, that saved her.

“The moment the Americans had entered Paris, she had said that every GI could have a free bottle of Chanel No. 5 for their wife or sweetheart. Those who could not speak French simply held up five fingers to show they wanted a bottle of the most famous scent in the world. With a queue stretching round the block, it is likely that a large number of American soldiers would not have taken kindly to anything happening to Mademoiselle Chanel,” de Courcy writes. 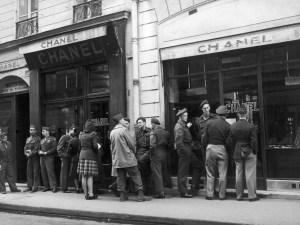 American soldiers In Paris waiting for the Chanel shop to open in 1945.  Courtesy of St. Martin's Press

As a hardworking woman herself, de Courcy, the author of 14 acclaimed books on people including Diana Mosley, Lord Snowdon and the Curzon sisters, acknowledges Chanel’s industry and perseverance.

After shutting her fashion house at the start of World War Two (and waging her own war with the Wertheimer family) Chanel finally made a deal — and peace — with her business partners. In 1953, instead of returning to La Pausa and a life of ease, she sold the villa, reopened the fashion house, and went back to work six days a week.

“She and Pierre Wertheimer fell into each other’s arms and he said to her: ‘You have got to go back into fashion,'” says de Courcy. “Her collection was absolutely panned that first year, but she took no notice. Shortly afterwards, in came the little tweed suits and the 2.55 quilted bag,” with the chain handle, the lipstick slot and a secret compartment that Chanel said was for love letters. Shortly before she died, aged 87 in 1971, she launched Chanel No. 19, another fragrance hit.

De Courcy said she was impressed that Chanel went back to work undaunted, aged 70. “At that age, to have the courage to do that kind of thing! That was one of her strengths. She wasn’t trying to keep up. She did what she thought was good, and did not care what the others thought.”

At the time, Chanel offered up a different reason for getting back in the game, telling her friend Marlene Dietrich: “I was dying of boredom.”