The “Sh-t (insert niche here) Say” viral-video craze has gone into overkill by now, but there’s one that resonates all too well: “Sh-t Fashion Girls Say.” 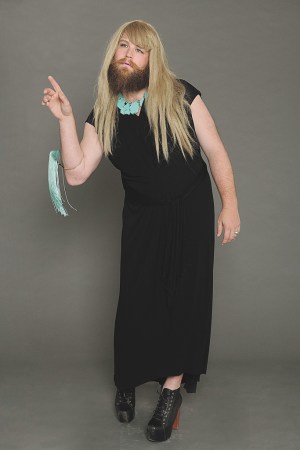 Mocking everyone from dads to hipsters to New Yorkers, the “Sh-t (insert niche here) Say” viral-video craze has gone into overkill by now, but there’s one sketch that resonates all too well: “Sh-t Fashion Girls Say.” (Haven’t seen it? Google it.)

Its star, P’Trique, a character created and embodied by 31-year-old Patrick Pope, is disturbingly accurate. The ultimate “fashion girl,” P’Trique spoofs on the industry — “Chic! So chic! Megachic!” — to dead-on effect. In addition to the two-minute parody, which has received one-million-plus hits on YouTube, P’Trique has added to the series with multiple videos, opening up his beauty bag in one spot and interviewing Nicola Formichetti in another.

His latest number came thanks to Maybelline, which recently tapped the sassy caricature to announce its partnership with pink-stranded model Charlotte Free, who will be the new face of the cosmetic brand. In the YouTube video, dubbed TopChicret, Free confides in P’Trique about her big gig, after which P’Trique spreads the news throughout the industry to everyone from Genevieve Jones to Betsey Johnson.

Here, Pope — in P’Trique character, of course — talks about everything from the Maybelline deal to tonight’s Met ball. “I’m so excited to be finally talking to WWD,” he says. “I woke up this morning and died of excitement. I had to be revived, literally, like with those little electric paddle thingies.”

WWD: How did you prep for the photo shoot for this story?
P’Trique: I’ve been practicing in a mirror all last night and all this morning. Well, I do that every morning, just to get ready for the day. I’m not going to lie, whenever I see a mirror, I always do like a little quick ‘smeyesing’ [Tyra Banks’ signature move for smiling with your eyes] practice.

WWD: Did Charlotte Free teach you that?
P’Trique: I was modeling before we met. Char Char, that’s what I call her, and I go way back. We were in the same casting pool at Versace, but I realized I didn’t want to be held hostage by someone else’s creativity, so I decided to get out of the modeling world. Charlotte stayed in. I just want to say, at the time, she didn’t have pink hair. I did. Not that I’m saying she basically stole the look from me, but I am.

WWD: Are you besties even though you spilled the beans on her new gig?
P’Trique: You know, we made it through the 2010 Alex Wang Friends and Family sample sale unscathed, so I think we can make it through anything.

WWD: How did you gather all your industry friends for the Maybelline video?
P’Trique: Generally, I always brunch with this particular circle on Tuesdays. We were at Peels the week the call came through. John Jannuzzi and I were splitting the spa eggs and trying to ignore the biscuit Betsey had ordered. Cory Kennedy was in the middle of telling us what went down in the crawl space of Le Baron that weekend. I got the news and immediately spat out my third mimosa to tell everyone. Of course they wanted to be involved. I didn’t even have to ask.

WWD: You’re the ultimate fashion girl. What does that mean to you?
P’Trique: It’s all about the attitude. Life is like Kabuki-inspired minimalism and Chanel gauchos, you just got to go for it. Real fashion girls know that.

WWD: What are your favorite trends right now?
P’Trique: I’m super into colorblocking. I layer my different-colored Birkins to get the effect. Then floral on floral on floral. Oversize paisley is the new cat-eye. That’s all I’d like to reveal for now.

WWD: Do you have a strategy when you shop?
P’Trique: Every new moon, I gather a roundtable of my industry friends to brainstorm my upcoming looks. From there, my assistant makes an inspiration board. After I’ve given it final approval, I give it to my trend director, my personal shopper and my fashion forecaster. I can’t tell you who they are, but I’ll give you a hint: one of their names rhymes with Shmace Shmoddington.

WWD: In your opinion, what are the ultimate fashion sins?
P’Trique: Uggs, faux vintage revival and, honestly, public pig-outs. Have the decency to do it at home — hello? Order in. Get the family dinner for one but eat it alone at your house.

WWD: You already have a million industry friends, but who’s your ultimate crush?
P’Trique: Give me a T. Give me a Y. Give me an R. Give me an A. What does that spell? I don’t know because I’m sort of dyslexic, but I think it’s Miss Tyra. No one’s more real.

WWD: Has her smeyesing hypnotized you?
P’Trique: Are you saying she’s like Professor Snape from Harry Potter and she’s just grilling me into her world? Because I secretly think that.

WWD: You can’t make the Met ball tonight, but if you could, what would you wear?
P’Trique: It’d be an amalgamation of harnesses, cutouts and metallics. I’d pull it all together with the theme of, like, an underwater Chanel-y sea bride. Like if Ariel was alive today and friends with Karl, but more nouveau.