“I’m moved by how hard it is to be young,” Sharon Olds says, sitting in the courtyard of her New York University faculty housing building, where she moved two years ago after 45 years in the same Upper West Side apartment.

From the bench, the divorced mother of two grown children looks on with softness at a pair of sisters playing in the fountain, at a pug out for his afternoon walk — and stops to chat with National Book Award-winning poet Terrance Hayes as he passes by. Her surroundings at NYU have given her a focus on the young. “These are not easy days for anyone,” she says.

Last month, Olds, 73, published her 13th collection of poetry, “Odes,” which is her first since she won the Pulitzer Prize for 2012’s “Stag’s Leap.” The collection also made her the first woman to win the T.S. Eliot Prize for Poetry, a distinction fitting for a writer whose work champions womanhood and the female body, in language she aims to be approachable.

Olds, who writes by hand, grew up in Berkeley, Calif., and earned her Ph.D. in English from Columbia University; before her Pulitzer, she won the National Book Critics Circle Award in 1984. “Odes” is a collection of praise and dedication to things basic and human, but which are often taboo in the printed verse — sexuality, the body, everyday thought.

“Anger and humor at being a woman in patriarchy,” Olds says, smiling, of her new work. “That’s a good combination.”

WWD: How did you first begin writing?

Sharon Olds: I was really interested in dancing, prancing about the whole house, and I was interested in make-believe, so the imagination. As soon as I could read and write, I got really involved in it. Who knows what it is that in some of us we have a need to make something and write. So I think in the beginning it would’ve been that impulse to make something of my imagination and my experience.

WWD: You left your hometown of Berkeley to attend the private girls school Dana Hall outside Boston. What effect did that have on you?

S.O.: Back then, places were further apart. When I arrived at age 15 in Boston, from Berkeley — Berkeley which wasn’t Berkeley yet, but was just starting to be an interesting place for someone who wanted to reconsider her attachment to the bourgeoisie — when I got to Massachusetts, I was peculiar. People thought that I was different from other people because I was from so far away. So many of them had not met someone from California. I’m not saying that I was weird, but I think I spoke my mind a little bit.

WWD: How did that experience shape your views on gender and society?

S.O.: That pressure, and the confusion that I think is still present of women: not wanting to seem too smart, but not wanting to seem too dumb, and also not knowing if we were dumb or smart. The gender strictures were narrow — so in the classroom [at Dana Hall], there were no boys — girls talked first. I was glad to go on to a coed college, but that couple of years was very good for me to be out of that particular loop. And there was a creative writing class, with a wonderful teacher. A very smart, dignified, somewhat shy person.

WWD: Explain a bit about how “Odes” came to be.

S.O.: I had read a book by Pablo Neruda called “Odes to Common Things” and while I was reading it I wasn’t thinking, “Oh, I could do this as well,” but I was thinking, “This is cool, this is so cool.” When something then came into my head and I started writing, it was one of these odes, to my common things — a lot of them, it turned out, were things that were common to girls when I was 15, that were not common to boys, or to poetry, or to culture. They would have been outside of poetry — over in hygiene or something.

But they are for many of us common, ordinary things. So many of us don’t know what to call it or how to communicate it right. [There is] a kind of prejudice against the kinds of possibilities that should be open to young women — a limited view of what women should be — or what men should me. All of the stuff we’re now talking about, about gender and transgender and the gender within each group — the politeness and the prudity of the world I grew up in meant that there were things that were important to me and interesting to me, [but] I had never read a poem about. And then those subjects started to come into me in a burst of girl feelings — girl feelings is definitely one way to put it, and also womanly happiness. And then there’s a side of me that’s just so excited thinking about things that haven’t necessarily been talked about. They are the things I’ve always been interested in.

WWD: You declined Laura Bush’s invitation to the National Book Festival in D.C. in 2005 for political beliefs. What are your thoughts on the place literary arts hold in today’s political climate?

S.O.: I do imagine that art might be more important than it seems to be. It just is [that] often one could think it’s powerless, or decorative, or off to the side. But I have no idea what the place of art is. Smarter people than I will have opinions on that. I suspect we couldn’t live without it. I suspect it saves us sometimes, from extreme loneliness or despair, when we write it or read it.

I can almost see you, in the air—like a species
in your own right. I’d thought you were something
I made, when I was in my room,
alone with my scissors, Scotch tape, and paper—
and you were there, doing god-knows-what
while I cut, moving my jawbones in tune
with the blades. Were you using your words, or playing with your alphabets, or less fettered than that, just
scooting your protons and neutrons and electrons
around. I know—you were something between
an electric current and a wave, in grey
and white brain-flesh. O thought, you were
inside me, but it didn’t seem so,
I thought of you in a skirt of dazzle,
flying. You darling, you’re beyond comprehension,
you travel in and out of our heads
at your own whim, and we are innocent
of all you say—and there’s no blood on your hands,
dear thought, though I’ve killed so many of your kind there’s been a lot of your blood on mine—no more, go
roam, fill the room, go out
upon the earth, go to and fro,
and up and down, in it, I know you will
come back: see how my eyes get wet when I say it, I am sane.

Excerpted from ODES by Sharon Olds. Copyright © 2016 by Sharon Olds. Excerpted by permission of Knopf, a division of Penguin Random House LLC. All rights reserved. No part of this excerpt may be reproduced or reprinted without permission in writing from the publisher. 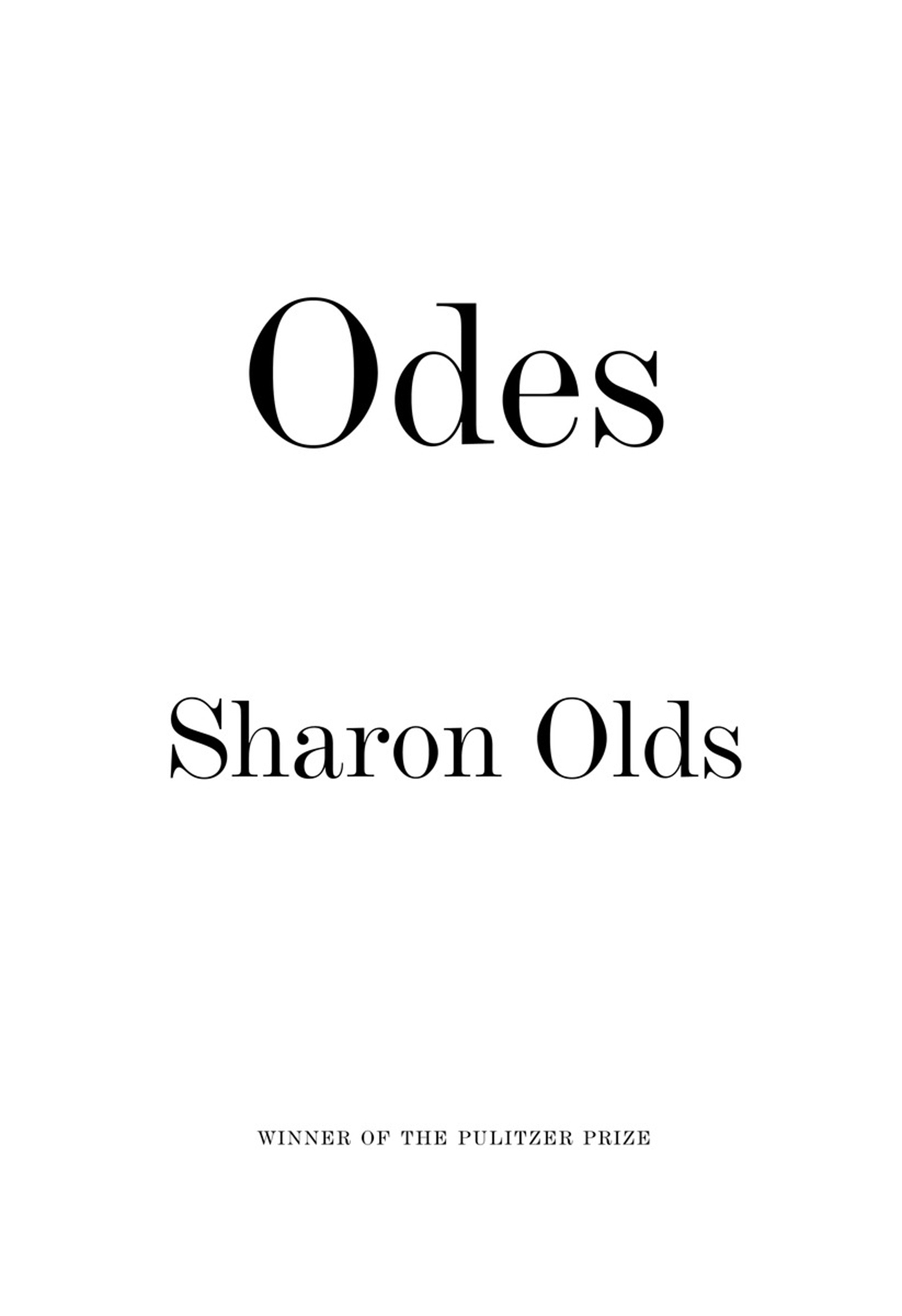