The engagement of Princess Beatrice and Edoardo Mapelli Mozzi, and the big reveal of a ring designed by Shaun Leane, come at a difficult time for Britain's royal family.

LONDON — It’s been an action-packed year for the London jeweler Shaun Leane: He’s been preparing for his 21st anniversary, working on a book — and has just designed his first engagement ring for a member of the royal family.

On Thursday, the Duke and Duchess of York — better known as Prince Andrew and Sarah Ferguson — announced their eldest daughter Princess Beatrice was getting married to her Italian beau Edoardo Mapelli Mozzi, with the wedding set to take place in 2020.

Leane said he worked closely with Mapelli Mozzi, a multimillionaire Italian property developer who has a two-year-old son from a previous relationship, on the ring, and added that its design was a fusion of the couple’s artistic tastes.

“I worked with Edo closely for the past four to five months: He wanted the fusion of two elements in one ring, his love of Art Deco and Princess Beatrice’s love of Victorian style, so it’s a mix of both aesthetics,” Leane said in an interview. “There are also other elements in the ring that reflect the unity of the two of them.” 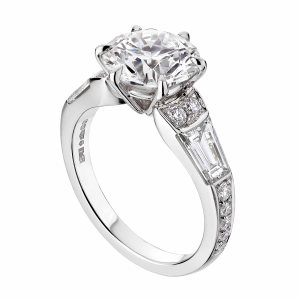 The ring designed by Shaun Leane.  Simon B Armitt

The ring consists of a round-cut diamond at the center with tapered baguettes on each side. The diamond-studded band is made of platinum, and has been designed in Leane’s signature style.

Leane said he sourced the stones himself, ensuring they were ethical, while the ring was made by the finest goldsmith at his London workshop.

“We documented the process every day, starting with the melting of the platinum, and we sent pictures to Edo every other day,” he said, adding that he’ll also be designing the couple’s wedding bands.

Leane said he was introduced to Mapelli Mozzi through a client who is close friends with the groom-to-be.

Both the Duchess of Cambridge and the Duchess of Sussex, Princess Beatrice’s cousins through marriage, wear Leane’s signature jewelry or the designs he created for Asprey.

Leane, who earlier in his career made dramatic runway jewelry for Lee Alexander McQueen, said about one-third of his business is bespoke. He also creates jewelry collections — two new ones are coming out next week — and has begun to create large-scale designs in the public realm.

One year ago, Leane made his architecture and public art debut with the opening of the 21 Young Street apartment building in Kensington. Leane designed the building’s exterior metalwork, a graceful maze of leaves and vines.

It was the largest scale commission in the U.K. to be undertaken by a jewelry designer, and his metalwork for 21 Young Street will also be on permanent display at the V&A Museum in London.

His worked formed a significant part of the “Savage Beauty” exhibitions at the Metropolitan and the Victoria & Albert Museum. Last year, he staged his first large-scale installation in China, with Pace Gallery, and worked on a furniture collaboration with Maker. 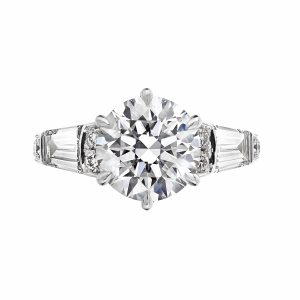 An image of Princess Beatrice’s engagement ring.  Simon B Armitt

In 2017, Leane auctioned off the pieces he created with the late McQueen, at Sotheby’s New York, as part of the house’s “Life of Luxury” auction series.

In 2020, he plans to mark the 21st anniversary of his brand with a coffee table book that looks back on his business, his designs and his early work with McQueen. The book will be published by ACC Art Books.

News of the ring and its provenance came out shortly after the engagement was announced on Thursday morning. The Duke and Duchess of York said the couple became engaged while away in Italy earlier this month and said the wedding would take place next year, but declined to give further details.

The princess and her fiancé said they share “so many similar interests and values, and we know this will stand us in great stead for the years ahead, full of love and happiness.”

Mapelli Mozzi’s parents, Nikki Williams-Ellis and Alessandro Mapelli Mozzi, said their family “has known Beatrice for most of her life. Edo and Beatrice are made for each other. They share an incredibly strong and united bond.”

The engagement is positive news in what is shaping up to be a difficult autumn for the British royal family. Princess Beatrice’s father, Prince Andrew, is under fire for his close ties to convicted sex offender Jeffrey Epstein, who committed suicide in prison last month. One of Epstein’s most vocal accusers, Virginia Roberts Giuffre, says she was one of Epstein’s slaves and was made to have sex with Prince Andrew.

The palace denies all of the Epstein-related allegations against the prince.

Queen Elizabeth, meanwhile, has been dragged into Britain’s latest Brexit — and parliamentary — drama. Last month the queen, following protocol, gave her assent to Prime Minister Boris Johnson’s controversial, divisive decision to suspend parliament ahead of the Brexit deadline on Oct. 31.

Earlier this week the U.K. Supreme Court ruled that Johnson’s move was unlawful, null and void. Johnson has also been accused of misleading the monarch about his motives for the suspension, making her look foolish and placing her in difficult situation.

Buckingham Palace has not commented on the Supreme Court ruling.