Culturally curious New Yorkers turned out to Lincoln Center on Thursday night to take in a stage show from the traditional Chinese performance troupe. 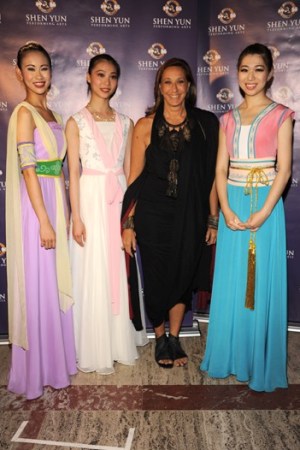 Among the crowd who hung out afterward for a reception were Donna Karan, whose Urban Zen charity hosted the evening, Ann Dexter-Jones, Candace Bushnell and Zani Gugelmann.

Nora Zehetner explained that she had been as captivated by her seatmates as the goings on onstage.

“There was this older couple and they were all dressed up for the night,” the actress said.

“It’s so sweet, they were holding hands the whole time and [he was] rubbing her hand. It was so sweet. It made me tear up.”

As the reception unfolded, handlers made the rounds introducing the night’s performers. In one corner of the room, Peter Marino chatted up the company’s choreographer, Yungchia Chen, and a principal dancer, Steven Wang, through an interpreter.

“Tell them I go to China four times a year,” he instructed.

“But I don’t speak Chinese,” Marino added with a laugh.

In a break from the cross-cultural exchange, he offered up an assessment of the performance. “I liked the colors and I liked the energy,” Marino said.

WWD observed that the colors had been a bit brighter than the architect’s garb for the evening — his standard black leather biker motif.

“You don’t know what’s underneath,” he advised.