The Japanese TV personality and designer talks about anime’s influence on her style, and how post-earthquake Japan is showing small signs of progress.

By Rosemary Feitelberg on May 16, 2011
View Slideshow 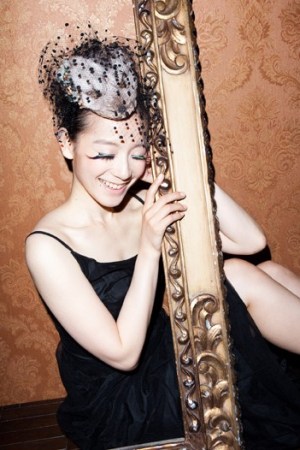 The wear and tear of a long haul flight did not deter Japanese singer, actress, TV personality and designer Tomoe Shinohara from dressing to the nines for an interview at the Japan Society.

Better known as “Shinorer,” the 32-year-old turned up in a one-shoulder ultraviolet bulbous dress of her own creation with accessories galore — oversize Christian Lacroix buttons, a feather fascinator, rose gold-colored fishnets, hot pink metallic peek-toe pumps, a galactic ring and bracelet and one lightning-like earring (also of her own design.) In Manhattan for a performance last Friday with Hikashu, the petite pop star spent a good 45 minutes applying her own makeup before sitting down for a chat. Although a translator relayed questions, Shinohara seemed to need no help whenever the conversation turned to fashion.

Shinorer talked excitedly about “Creamy Mami” anime’s influence on her style, as well as what it’s like to pal around with Sean Lennon and how post-earthquake Japan is showing small signs of progress.

WWD: Why do you think you are popular?

T.S.: I’m very good at making friends. That is why I had the opportunity to interview George Lucas, Quentin Tarantino, Robin Williams and even James Brown. I tend to talk too much and that made George Lucas’ bodyguards nervous. I made a joke that I wanted to be Natalie Portman but I called her Natapo by mistake. George loved it. He convinced the bodyguards that I was a funny girl and he even started filming me with his own camera. After I interviewed Sean Lennon, we became friends. When I come to New York, he is my best friend. We go to karaoke. He sings his songs and I sing background.

WWD: What do you think is the greatest difference between Japanese and American fashion?

T.S.: Americans expose their bodies. They’re sexy. In Japan, the anime clothes are so cute. Creamy Mami is my favorite. I was so shocked when I first saw this anime show when I was 4. It is so unrealistic and her body figure is so far from a human body. I so wanted to wear her clothes ever since then.

WWD: There has been a lot of controversy here about how relaying unrealistic body images affects young girls. Is it not that way in Japan?

T.S.: In Japan, people pick someone whose body type is close to theirs to try to imitate.

WWD: I was told you design your own clothes. How long did it take to make the ruffled, tulle-skirted dress you are wearing?

T.S.: It was quick — it took eight hours from the time I thought of it until it was done. The music I compose overlaps layers of my voice so the music matches my dress. Ten years ago I graduated from fashion college and I started designing my own clothes. I have a jewelry line, WTC by Tomoe, that you can buy online. Libertine’s designer Cindy Greene is a friend and I really like her designs. My dream is to do something with her.

WWD: What other designers do you admire and how often do you shop?

T.S.: Christian Lacroix and Christian Dior couture. I prefer unique and complicated design. I shop every day. I don’t think about it — I just go.

WWD: Do you think you influence your fans’ style?

WWD: What will you do in New York?

T.S.: I want to see the museums, especially the MoMA for the balloon art. Walk in Central Park. I want to buy fabric and ribbons to bring back to Japan to create my own clothes — anything you don’t see in Japan. There isn’t much patterned fabric. I want to go to the very industrial fashion area rather than the high-end shops. Finished products don’t give me ideas. I want to see the raw material before it’s done.

WWD: How is life in Japan improving after the earthquake?

T.S.: Right after the earthquake there were many places that you could not go. There was a lot of police tape. People can gradually go to these places. Transportation is moving. Nothing is stopped…I really appreciate the world’s support for Japan. I had to come to New York to share my appreciation for the world.

WWD: What would people be most surprised to learn about you?
T.S.: That I am the daughter of a sushi chef. My parents own a sushi restaurant.