Joshua Henry stars in "Shuffle Along" on Broadway, an updated remake of the groundbreaking 1921 production. 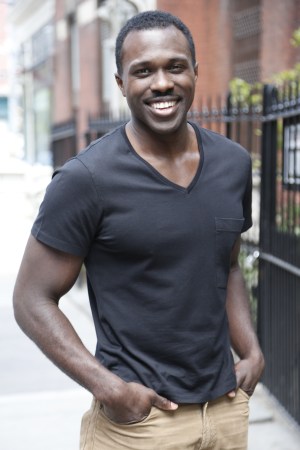 “Shuffle Along” opened on Broadway in May 1921, at Daly’s 63rd Street Theatre uptown, in heaps of debt and with a cast of Broadway newbies. It went on to run for more than 500 performances, causing traffic jams nightly on 63rd Street, and was so popular a midnight showing was added. It was also written, produced and acted by a solely African-American cast, and was one of the first productions to draw both black and white audiences.

The story returns to Broadway on April 28, though this time it’s a little further downtown in the heart of the theater district. The latest iteration is meta, in a way. It’s an origins story, reflecting on the play’s history and telling the story of its 1921 genesis, while still including the beloved numbers that brought the show fame. Helmed by six-time Tony winner Audra McDonald, “Shuffle Along” stars 31-year-old Joshua Henry, making his seventh Broadway appearance, as the lyricist Noble Sissle, who was one of four men behind the 1921 production. “I think it’s a really good thing, as an entertainer, to remember how I’m able to do what I’m able to do,” Henry says, from a corner of Peacefood Café near his Upper West Side apartment. “If it wasn’t for those people I wouldn’t have found my calling.”

Henry, twice nominated for a Tony, moved to New York at 21 after graduating from the University of Miami’s theater program. “My mom works at an accounting firm, my dad’s a math teacher,” he says. “I didn’t know [theater] was an option until my senior year of high school, when my music teacher told me I could do this.” He came to New York with a gig at the Paper Mill Playhouse in New Jersey, and made his Broadway debut as an ensemble member of “In the Heights.”

The original production of “Shuffle Along” found much greater success than what was expected — though that isn’t always the nature of Broadway, Henry says. “You don’t know how it’s going to be received. Sometimes audiences just aren’t ready for it, or sometimes there are other more famous shows around,” he says, bringing up the most famous show to open on Broadway in recent history, a production by the name of “Hamilton.” “I’m obsessed with ‘Hamilton,’ I’ve seen it like three times and if I could get a weekly pass I would,” Henry says. That said, “I grew up playing sports so I think of what it would be like to be in the NBA, if you were a great player when Michael Jordan was playing. You could’ve been a phenomenal player, but you’re in the Jordan era. That’s the unfortunate thing about the competitive nature of entertainment. But we know what we signed up for.”

While “Shuffle Along” caused quite a commotion when it opened in the Twenties, Henry is understandably anxious about how the show will be received in 2016. “I was walking in the park the other day and I saw this statue,” Henry says. “And it had all this bird crap on it and all this mold, and I was thinking that at some point people paid a lot of money to erect this statue. There was a ceremony, it was a huge deal. And then years go by and it’s literally just forgotten. History can just be so unkind as time passes.”
In that vain, he sees “Shuffle Along” as a timely story to be retold in 2016. “These people did so much for the entertainment business, for uniting uptown and downtown,” Henry says. “Like, the reason audiences are integrated is because of this show. So some of the things that we enjoy we don’t know how they came about, and ‘Shuffle Along’ really made them happen. And it was all around entertainment, and it unites us — art unites us.”