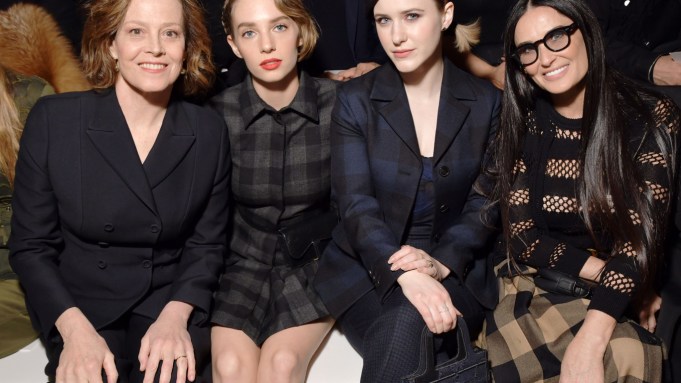 ART AS A MESSAGE: On the day after Harvey Weinstein was convicted of rape and criminal assault, guests at the Dior show on Tuesday were greeted by a set design riffing on what was probably one of the guiding words of 2019: giant luminous signs reading the term “consent.”

This installation, which featured a number of additional feminist phrases and was devised by artist collective Claire Fontaine, was an immediate talking point for front row guests.

“Women raise the uprising,” read actress Andie MacDowell. “We most certainly do,” she said, gesturing to her daughter Rainey Qualley, sitting front row next to her.

“It’s our first fashion show together,” continued MacDowell, who is planning to start working on two films as soon as she is back in the U.S. “It’s a nice bonding moment.”

The show was attended by an impressive pack of women, all ages and generations combined. Maya Hawke, the 21-year-old daughter of Uma Thurman and star of “Stranger Things,” sat a couple of seats down from Demi Moore, chatting with “The Marvelous Mrs. Maisel” lead actress Rachel Brosnahan and “Next in Fashion” presenter Alexa Chung. Model Inès de la Fressange attended with her daughter, Nine d’Urso, who had just chopped her long hair into a garçonne style and confessed to feeling “liberated.”

Sigourney Weaver mused on what empowerment means to her, both as an actress and as a woman.

“I try to feel empowered everyday,” she said. “This past year I’ve worked in four very different jobs, and I guess when I feel like I’m coming out prepared and ready to fight as an actor, that’s when I feel the most empowered. And then I feel empowered as a woman — that’s sort of the other part of me.”

Weaver will appear in the next season of French TV series “Call My Agent,” in which each guest star plays themselves. “At least, a version of myself,” corrected the actress. “I changed who I am a little bit. I think it’s going to be a very funny episode, and I enjoyed filming every minute of it.” She gave a shout out to Jean Gabin — not the historical French actor, but character Arlette Azémar’s Jack Russell in the series.

Nina Dobrev was treading carefully — the floor of the whole venue was papered with issues of French newspaper Le Monde.

“Unfortunately, I don’t remember the last time I sat and read a full newspaper,” said the former “Vampire Diaries” lead actress, who has just finished shooting a project in Africa. “But I read the news on my phone.”

She turned to the lit-up slogans in the Tuileries show venue. Which one would she choose to wear on a T-shirt?

Dobrev pondered a moment. “Feminine beauty is ready-made,” she read out. “That would be the one.”