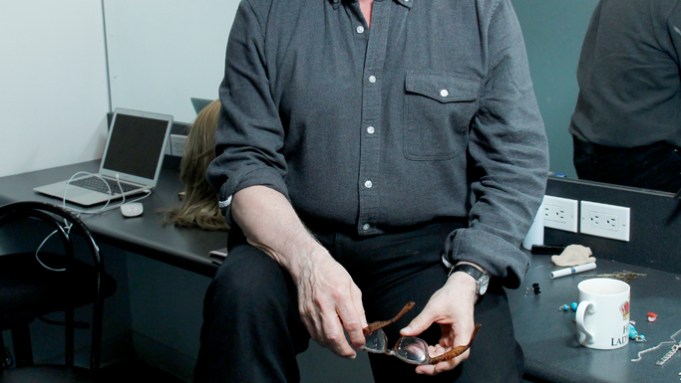 The noted actor Simon Callow is hardly the first performer one would think of to play a male-to-female transsexual. But he does so in “Tuesdays at Tesco’s,” which is playing at Manhattan’s 59E59 theater until June 7. It concerns the Tuesday activities of just such a woman caring for her father, who is living alone and needs help with cleaning and shopping at the British supermarket.

Callow’s character, Pauline, while certainly no beauty, is quite believable, even though his own persona is nothing if not masculine. His appearance as a womanizing doctor in a 2005 edition of “Midsomer Murders,” who seems to have the whole female population of an English village in his thrall, and which was just shown on public television in New York, is thoroughly convincing. He also plays the swashbuckling Duke of Sandringham in the series “Outlander.”

Callow, however, is gay, and likes to point out that, for years, he tried to out himself in numerous interviews, but no journalist ever printed the information. It wasn’t until he published his 1984 book “Being an Actor,” which included this detail, that it was publicly revealed.

The performer is also an accomplished writer — becoming one was his original ambition. He has also written, among other books, “Love is Where It Falls: The Story of a Passionate Friendship,” which is about his relationship with the theatrical agent Peggy Ramsay; a biography of Charles Laughton; a book on Dickens’ Victorian Christmas, and two volumes of a biography of Orson Welles. The third is due out from Jonathan Cape in November. This year marks the 100th anniversary of Welles’ birth.

Callow got involved with “Tuesdays at Tesco’s” after a friend saw a production of the play in Paris and told him, “This one’s for you.” It was originally written in French by Emmanuel Darley, called “Le Mardi à Monoprix,” and it’s essentially a one-man show — he is the sole person onstage besides Conor Mitchell, a composer who sits at the piano and occasionally plays a few notes. The English version of the play was translated by Matthew Hurt and Sarah Vermande, and this edition is directed by Simon Stokes. It was a big hit for Callow at the Edinburgh Festival, where it filled an auditorium with 850 seats every night. Mitchell worked on and finished a piece during the run of the show, which was also performed at Edinburgh.

The character of Pauline begins to come together for Callow after he puts on his wig and fake nails; a makeup artist does his face. He wears a beige suit, red top and blue accessories. Fake breasts and a body suit help, too. “The shoes were originally beige, too, but that was too dowdy for New York,” says the actor, who bought a few pairs of bright blue shoes.

He admits that the script was difficult for him to learn, perhaps because it’s so repetitive. Ben Brantley, reviewing the piece in The New York Times, praised the production but criticized the ending of the play, which is quite sensational as a break with the ordinariness of the rest of the action. Asked about this, Callow simply says that he doesn’t read reviews. “Positive ones are the worst, because then you try to repeat what they praised,” he says.

Callow went to Queen’s University Belfast then studied at the Drama Centre, where he says the emphasis was on “transformation” in acting. His tutor at Queen’s University was part of the code-breaking group at Bletchley Park during World War II and worked out an exception to the operation of Germany’s Enigma Machine. It was based on the idea that the young German code-senders, who could be a bit lazy, might not change the setting of the machine each time as they were supposed to, instead using a single setting for as many as five or seven messages. This theory proved to be correct.

One detail about Callow that’s unexpected is that he’s a keen classical music fan. He describes himself as a “groupie” of classical musicians, adding that he has many friends who are pianists, cellists, conductors and composers, and that they often get together and discuss music. His mother, however, was one of very few parents who did not want her son to have piano lessons, although he begged for them. Her stance was that if he had any talent it would have shown itself already. She was, he says, obsessed with the idea that he should go to university because she hadn’t. And so he did. Callow only spent a year at Queen’s University, but now they have given him an honorary doctorate. He was also named a CBE in 1999.

In London, the performer lives in Islington, in the northern part of the city, in a neighborhood he’s very fond of. He calls it “semirural” and says, “it’s very silent, and taxi drivers usually don’t know where it is. There’s a little local grocer, a Field to Fork cooperative where the food comes up from farms, and a hardware store.”