He has written 13 books and appeared in many plays and films. 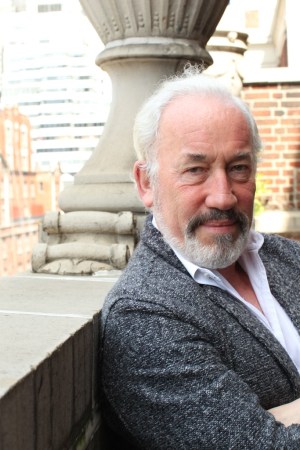 Simon Callow is a polymath — he has written 13 books on subjects including Dickens, Shakespeare’s sonnets, Charles Laughton, Orson Welles (two of three projected volumes thus far) and a memoir (“My Life in Pieces: An Alternative Autobiography”), and he has appeared in many plays and films, including “Postcards From the Edge” and “Angels in America.” But he’s not intimidating. In person, he has the charm he exudes on stage and onscreen, which he shows amply in “Being Shakespeare,” which was just at the Brooklyn Academy of Music and is now in Chicago. It’s a compendium of what little we know about the Bard plus excerpts from his plays, which Callow acts out.

He notes that some actors are intellectual, while others just aren’t. “I don’t think that Laurence Olivier ever read a book about Shakespeare,” he points out. He adds, “English theater companies are pragmatic. They’re good at getting the play on. They aren’t by their nature exploratory or experimental.” He also observes that, in 1962, although the stars would have been making major money in movies by then, actors in the Royal Shakespeare Company were being paid 18 pounds a week. Regarding the “Stanislavski Method,” he says, “Man cannot live by emotion alone.”

He adds that there are “very destructive tapes of Lee Strasberg teaching those kids,” adding that teaching was “a terrible blood sport, offering the work in front of an audience and a teacher,” often to heavy criticism.

Callow himself, after dropping out of Queen’s University Belfast, went to school at the Drama Centre. “I knew I needed to be licked into shape,” he says. He left just before the end of the course, after having been offered a professional role. Even now, he hasn’t played many of the major Shakespearean parts. He was never offered Hamlet because “I’m not the kind of physique they were looking for,” although, recently Simon Russell Beale played it, and “to say he is portly is putting it charitably.”

On the other hand, Callow has often interpreted Shakespeare’s sonnets. Once, when he was performing them in sequence at the National Theatre, he looked out in the audience and saw John Gielgud sitting there. “But he stayed to the end, God bless.” The current piece he is doing about Shakespeare was written by Jonathan Bate after Callow had performed in a similar one about Dickens. The actor says he’d like to take the Shakespeare on the road in the U.S. to Los Angeles, Seattle, Boston, San Francisco and Portland.

He says he has no hobbies (“I do three jobs, acting, directing and writing”), but he is passionate about his two boxer dogs, who were littermates. And he likes to cook. He doesn’t have a place in the country, lives in King’s Cross in London, and admits to having “eaten fortunes at restaurants.”

Callow played Reverend Beebe in the 1985 movie “A Room With a View.” It was a delightful film to work on, he says, by contrast with the one he had been making just before it, “Amadeus,” which he calls “hateful” and says had a very tense on-set atmosphere, partly because it was a big American film, “like an action movie,” that everyone hoped would be a blockbuster. It was also filmed in Czechoslovakia, which was not particularly welcoming to Americans at that time, nor to its director, Czech emigre Milos Forman. “There was a sense of anxiety and dread on the set everyday.”

Callow, who is 62, was one of the first major actors to come out of the closet. When asked if he feels that this impacted his career in any negative way, he responds, “Well, if someone didn’t want to cast me because I was gay, they weren’t going to tell me, were they?”