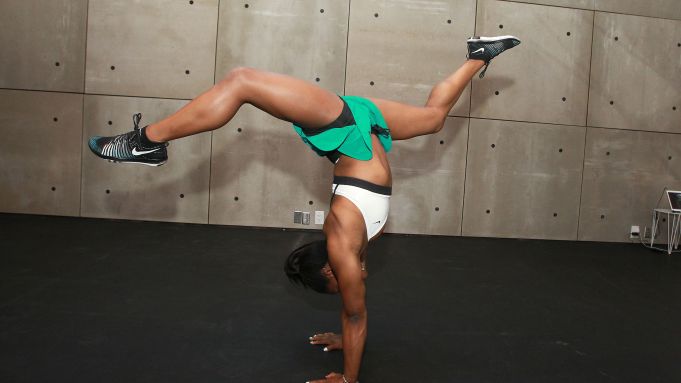 The most coveted selfie of New York Fashion Week isn’t Kim Kardashian, or even Beyoncé.

The snap that will get you all the “likes” is none other than a shot with Simone Biles. The 19-year-old Olympic-gold-medal-winning gymnast has been making the media rounds in New York and will be sitting in the front row at the Sherri Hill show on Monday — her first fashion show ever — along with fellow Final Five teammate Aly Raisman. The rub? Biles isn’t exactly used to dressing up, especially for the likes of fashion shows.

“I’m not too big into fashion because I usually only wear athletic clothes. But now I actually have to wear normal people clothes, so I’m getting into it,” Biles says in an exclusive interview at 45 Grand, Nike’s private VIP gym. “I’ll go to a lunch and I’m putting on athletic clothes to go to lunch. I’m just, like, ‘Simone, you can’t wear that. Put on some jean shorts or something.’”

But like the Houston native showed at the Olympics, it’s go big or go home. The fashion novice is all over the ath-leisure trend, as she styled herself and modeled for WWD. She’s also got a major shopping list and wish list for this New York trip. Topping the luxury-laden queue? A Cartier Love bracelet, Louis Vuitton’s Never Full bag, and a special trip to buy a bag at Céline on Madison Avenue.

“One day, Aly and I were talking about [Céline bags] and we were obsessing over them,” Biles says. “So we made a deal: If we win team gold, we’ll go get one…and we did.”

As for her own selfie goals this week, Biles is gunning for snaps with Zendaya, Demi Lovato, Dave Franco and Theo James. After all, Beyoncé and Kardashian have already been checked off at the VMAs. “That was my goal. I had to take a selfie with her and I did,” Biles says, beaming with pride about scoring a shot with Kardashian, arguably Instagram’s holy grail. “She was so sweet and I’m sending leos [aka leotards] to her daughter North and Kourtney’s daughter, Penelope.”