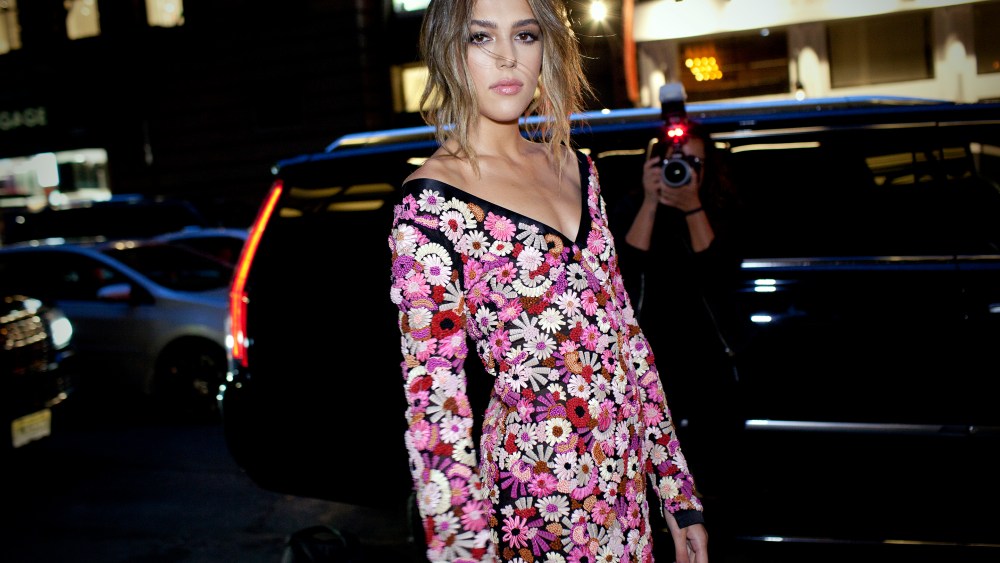 “My mom would kill me,” says Sistine Stallone, motioning to the mess unfolded in her room at the 1 Hotel Central Park Wednesday night. A suitcase is tucked behind the curtain of “day clothes,” a hotel rack filled with the week’s looks of pieces by Elie Saab and Jonathan Simkhai sits in the bathroom, and a spread of makeup and hair products is laid out on the window seat.

Ignoring the Tom Ford minidress hanging by the closet, the hairstylist and makeup artist tending to her face, and the black car waiting to whisk her to New York Fashion Week, the scene in Stallone’s room would come across as that of any typical 19-year-old away from her parents for a week in the city. “Vanderpump Rules” plays on TV, and between spritzes of hairspray she gabs with her team about binging “Game of Thrones” (nobody tell her the fate of Jon Snow: “Don’t say anything! I feel like he dies!”)

Stallone, the middle daughter of Sylvester Stallone and former model Jennifer Flavin, is giving her all at modeling, having broken out as Miss Golden Globe with her two sisters earlier this year. Having sat front row at Michael Kors and walked Topshop and Chanel (twice), she’s in New York for the length of the week, hitting front rows at Ford, Kors and Ralph Lauren, parties by W Magazine and Mert and Marcus, and will walk in Zadig & Voltaire.

The morning after the show, she’s still slightly groggy over the phone, in a bit of a daze from the previous evening’s excitement.

“Last night was so much fun — honestly, going to big shows like this makes me so excited,” she says. Her hotel was home to fellow Tom Ford front row attendee Ciara, who drew the paparazzi to the entrance as she left. “I felt like I was in a movie,” Stallone says of the cameras. “I didn’t think that this was real life.”

Ciara’s paparazzi was topped by sitting next to Ansel Elgort and a Kim Kardashian sighting on her way into the venue.

“When I first got there Kim Kardashian arrived so it was really cool to see her do the walk on the red carpet — I was like, ‘I’ll practice, she’s a pro so I’ll copy what she’s doing,’” Stallone says. “I loved watching Joan Smalls walk because she completely owned it. And I loved the gown looks — I loved that Gigi was wearing a blush pink which I thought was such a pretty color and there were a lot of pantsuit type looks which I thought were really cool as well.”

The budding model, who recently started working with celebrity stylist Maeve Reilly, hopes to keep attending fashion week in whatever way she can.

“I absolutely love the whole aspect of runway, it’s really fun and really hectic, but I have just as much fun sitting at the shows and being a guest — I think that’s equally as cool,” she says. “I would obviously love to walk for someone like Tom Ford one day — that would be a true dream come true. Ever since I was a little girl I was so obsessed with clothes and would pull all of my outfits from my sisters — sometimes I would even help my mom pick an outfit. On my school iPad I would be constantly watching runway shows. I knew I had to be involved some way, whether it was modeling or interning at a magazine or some way. My mom was a model and she said, ‘Well why don’t you try it?’”

And for now, she’s as sweet, wholesome and earnest in her passion for the industry as she is for getting a responsible night’s sleep.

“I went back to the hotel,” she says of her night following Ford’s brief after party. “Just one after party for now.”