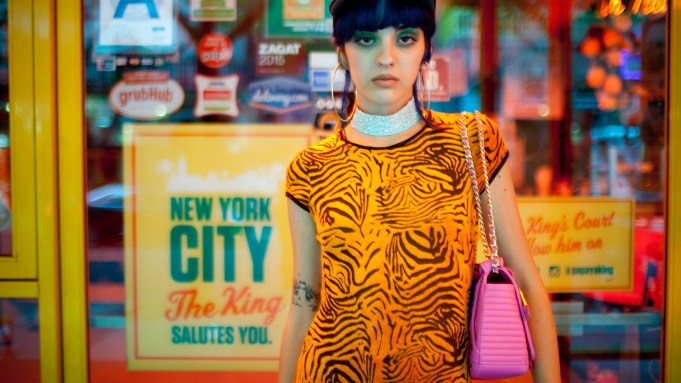 Sita Abellan has been running late all weekend. Wearing a baseball cap that reads “techno capitalism” and an oversize, studded leather jacket, she lights up a cigarette and starts talking about how she was late to a gig that morning. She was asked to arrive at 7 a.m. — on a Sunday, no less — but didn’t actually show up until 8. The reason she gives for her tardiness? “Because I was late.”

Abellan is a Spanish model and DJ who shot to Internet stardom when she appeared in the 2015 music video for Rihanna’s “B—h Better Have My Money.” She has since walked in the singer’s Fenty x Puma spring 2017 show, has become Jeremy Scott’s go-to DJ and has crafted a flashy and shameless presence on Instagram, where she often poses questionably in very little clothing.

“I just enjoy taking pictures of me,” she says. “I don’t care. For some people, [the pictures] are ugly or maybe too much or too extreme, but it’s just me. I don’t post anything I don’t like and I don’t feel forced. I do what I like, what I feel and I just have fun posting pictures. That’s what I do.”

In sharp contrast to her over-the-top Instagram and web site, which actually comes with a warning, Abellan is quiet, respectful and delicate in person. She’s cheery even though she says she woke up feeling sick and moves gracefully while crossing cobblestone streets in purple Balenciaga boots. She paired these with an orange zebra print dress, a chunky crystal choker, large gold hoops and a bright pink Moschino purse. Just your typical Sunday evening garb.

“When I was a teenager, what got me into fashion was Alexander McQueen,” she says. “For me, he was doing art. He was just making clothes, creating.” She admits her closet at home is highly disorganized and reveals she has so much clothes, she keeps a lot of them in her kitchen. Her favorite items are her shoes — she has more than 100 pair — and her growing collection of leather jackets.

This past fall, Abellan partnered with Misbhv on a capsule collection called “Pain” that was inspired by her travels to Tokyo two summers ago. “I really had a tough time working so much,” she says. “I was working a lot as a model — well, I was also playing, but more or less a model. But also, I met a lot of good people and I had a lot of fun, so for me, pain is not just a bad thing. I felt like pain would reflect my experience there, so that’s why I called it that.”

She’s now working on a collaboration with Freak City. The line, inspired by Lil’ Kim, features bikinis, T-shirts and crop tops. “I’ve been following Freak City for a few years,” she explains. “I went to L.A. for the first time to shoot Rihanna’s video and I pass by this store and we met. They are super creative people, so I was, like, ‘Let’s do something together.’” The collection will debut — along with Abellan’s own line of merch — at Made LA in June.

Much like her friend Rihanna, Abellan is reluctant to abide by any fashion rules. “I remember once in an interview many years ago, they asked me, ‘What wouldn’t you wear?’ and I said, ‘Tracksuit with heels,'” she recalls. “Some years after, I was wearing that.”

She’s averse to rules in general — not just ones pertaining to fashion — and approaches clothes the same way she approaches Instagram. “You just do what you feel, do what you like, you know?” she says. “Maybe the rule would be to not have rules.”

And to never say never.

Céline Dion Channels Belle for ‘Beauty and the Beast’ Performance

Blake Lively to Get Her Own ‘Big Little Lies’ Moment