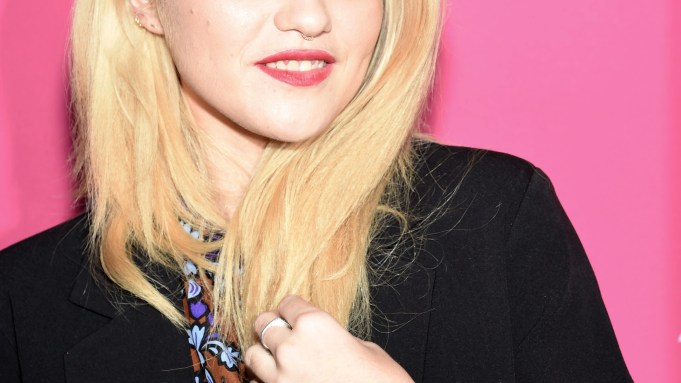 The story of Elvis Presley and Richard Nixon’s improbable meeting has been great fodder for media since the infamous photo of the two went to print. The narrative is revived in “Elvis & Nixon,” starring Kevin Spacey as Nixon and Michael Shannon as The King, which tells the story of the December morning in 1970 when Elvis arrived at the White House, wanting a meeting with the president.

Also appearing in the film is Sky Ferreira, the 23-year-old model, actress and musician, who plays Charlotte, girlfriend to Alex Pettyfer’s Jerry Schilling, who must choose between his more dependable life in Los Angeles with Charlotte, or life alongside his best friend, Presley. Ferreira signed with Capitol Records at 15 and her sophomore album is expected this year but for the moment she is focusing on her fledging acting career. She’s currently at work on “Baby Driver,” starring Jon Hamm, Ansel Elgort, Lily James and “Elvis & Nixon” costar Spacey; after “Elvis & Nixon,” she’ll appear in “The Trust” with Nicolas Cage and Elijah Wood, opening May 13, and later, “Rosy,” with Nat Wolff and Stacy Martin.
On the verge of losing her voice, Ferreira corresponded with WWD via e-mail during the final days of the Tribeca film festival.

WWD: Have you been doing much for the festival?

Sky Ferreira: This is the main event I’ll be doing for the festival. Possibly another surprise.

S.F.: I met with Liza Johnson for the film and got the thumbs-up for Jerry Schilling after spending time with him for a while. I play his wife and all of this because I brought up my love for Michael Shannon as an actor [to producer Holly Wiersma]. I had no idea she was making the film with him at the time.

WWD: Were you familiar with the story of Elvis meeting Nixon?

S.F.: Before this, I only knew about the photo and conspiracy theory.

WWD: What is your favorite Elvis song?

WWD: After “Elvis & Nixon” you have “The Trust” coming out in May — what is your character like?

S.F.: She’s mysterious. She’s street-smart, though. She fights back and isn’t as easy to crack. [She’s] a lot more tough than what she leads herself off to be.

WWD: What can you tell us about your upcoming sophomore album “Masochism”?

S.F.: It’s going along really well; I think people will be pleasantly surprised.

WWD: How do you approach balancing acting, music and modeling?

S.F.: By whatever I feel creatively passionate about.

WWD: You’ve worked a lot with Saint Laurent, from appearing in their campaigns in 2013 to being photographed by Hedi Slimane, and you’ve posted on social media about his departure from the brand — what was your experience of working with him like?

S.F.: Working with Hedi has always been really personal. It’s hard to get beyond Hedi not being the creative director.