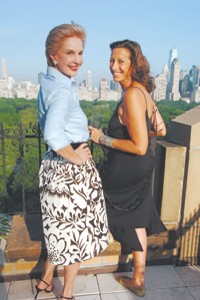 NEW YORK — Stan Herman may have been the star at the cocktail party Donna Karan and Anna Wintour hosted in his honor Tuesday night, but the departing CFDA president had heavy competition from the choice of venue — Karan’s Central Park West apartment. The fashion crowd, including Ralph Lauren, Carolina Herrera, Peter Som, Derek Lam, Proenza Schouler’s Jack McCollough and Lazaro Hernandez, Arnold Scaasi, Nicole Miller and Reed Krakoff roamed the Zen-like spaces filled with works by Francis Bacon, Julian Schnabel, Gregory Colbert and William Morris, among others. But few had time for the arts when breathtaking vistas of Gotham were on hand on Karan’s terraces. Vera Wang couldn’t conceal her excitement when Lauren and Karan had a tête-à-tête on the terrace against the city backdrop. “Look at the two giants of American fashion down there,” Wang said. “Now that’s a picture. Where’s Calvin?”

Herman was more taken by a nearby site, which was once the Mayflower Hotel. “I just wrote a chapter in my memoirs on it since it was where all the great Seventh Avenue parties were,” he said. “It also had a view of the city, which made me feel like some day it will all happen to me. This is the closest I have come to it.” Karan didn’t miss a beat. “You could have it anytime,” she offered.

Hernandez and McCollough, meanwhile, took turns looking through gold-plated binoculars that offered a glimpse at the action on the lawn in Central Park. “This is pretty cool,” said McCollough. “I’d like to use it to see into other people’s apartments.”

Last Friday night in Cannes, France, Domenico Dolce and Stefano Gabbana pulled in the actors, the rockers and the royals for a night of revelry to cap off the Cannes Film Festival. This year’s fete, the third annual, also toasted the opening of the designers’ shiny new boutique on La Croisette, Cannes’ main shopping boulevard, which made it a double reason to celebrate. “Every year, we love to be here,” yelled Dolce from the dance floor lit up “Saturday Night Fever”-style, where he spun around to a mix of Donna Summer and The Doors. VIP visages like Monica Bellucci and Kate Bosworth were reflected tenfold in the massive mirrored club (a converted wing of the Hotel Martinez), while Bono and the Monaco heirs Andrea and Charlotte Casiraghi crossed paths coming and going. “Regarde, c’est Bono!” gasped members of their excited entourage. Isla Fisher and Sacha Baron Cohen arrived hand in hand, though they got separated amid the throngs of disco-mad Europeans, while Georgina Chapman made her way over to a bunch of girlfriends standing on top of a banquette. “Oh, thank God!” she exclaimed. “It’s madness in here!” (Harvey Weinstein met up with her at 3 a.m. after a midnight screening of his “Clerks 2.”) Yet nobody seemed to mind the friendly crush, which went strong until 4 a.m., least of all Vincent Cassel, who shrugged, “It’s a party, after all!”