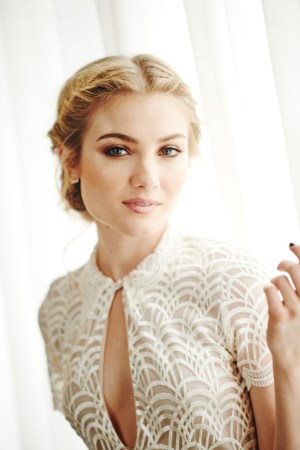 It’s a thought that’s entered the minds of most pledging sorority girls in the midst of a grueling hazing season: “These girls are evil.” That’s the premise that Ryan Murphy expounded upon for his latest show “Scream Queens,” premiering on Sept. 22 on Fox. “I lived in a sorority house my sophomore year, I had 59 female roommates and learning to navigate the minefield of female politics — that’s a very real thing,” Skyler Samuels says. The 21-year-old star of the show is speaking to WWD on her way to LAX, heading back to the set in New Orleans.

“I guess New Orleans is kind of home now, and it’s funny, it’s the first place I’ve ever had a proper place of my own. I didn’t think it would be New Orleans, but it’s definitely a pleasant surprise that it is,” she says. “It’s a very charismatic city. It’s got its own flavor, it’s a spooky city, which is so perfect for ‘Scream Queens.’”

This story first appeared in the August 12, 2015 issue of WWD. Subscribe Today.

“American Horror Story” fans will have a sense of what to expect from “Scream Queens,” rife with Murphy’s signature brand of camp and flare for gore. The show centers around the “It” sorority on campus at Wallace University, Kappa Kappa Tau, haunted today by a crime committed some 20 years ago. The cast is stacked with Gen Z faves. Lea Michele, like Samuels, plays a Kappa hopeful, while Emma Roberts is the sorority’s sinister queen bee, trailed by a pair of acolytes, played by Abigail Breslin and Ariana Grande, who call themselves the “Chanels.” As pledge season goes on, so does the murder mystery: one cast member is killed off each episode.

That said, “Queens” is fright-light. Similar to its predecessor, the show is a dark comedy; with the carnage punctuated by Millennial-friendly quips. Think “Mean Girls” meets “Scream.” “It’s definitely a comedy, it’s definitely a horror, crazy things are happening, but we’re also dealing with the very real truth that girls….They can be tough,” Samuels says. “The experience of dealing with very different types of girls, very different personalities, ambitions, knowing how to find a way to collectively get through the day and live together despite our differences — that is definitely the heart of the show.”

Born and raised in Los Angeles — “well, not technically: I’m a Valley girl” — Samuels is no stranger to a script. Her first job came at age seven, when her mom, a producer and developer for unscripted television, ran into a work emergency. “At the time she was a producer for ‘Access Hollywood,’ and her boss had organized this really big junket for the second ‘Harry Potter’ movie. They had hired another girl to come in and interview the actors, and the night before the junket she dropped out. They were panicking, and my mom’s boss was like, ‘Why don’t you just send Skyler?’ And my mom was like, ‘Skyler?! She’s seven and missing half her teeth, are you crazy?’”

The teeth came in, as did the roles, and Samuels was soon appearing on Disney Channel’s “Wizards of Waverly Place,” and later a small role in Murphy’s “American Horror Story,” her unofficial audition for “Scream Queens.” “I grew up watching ‘Glee’ and ‘Nip/Tuck,’ and I had always sort of wondered what is it about his shows that makes them stand out from other shows, what is that magic touch? When I got to be part of it, I realized there is no place like a Ryan Murphy set.”

Murphy’s involvement alone was enough to get her to want the role. “He’s like your superchic fun best friend slash parent. He’s kind of a dad, kind of your friend, kind of your boss, kind of somebody you’re constantly in awe of,” Samuels says. “I would work for him for the rest of my life if I could.”

On “Queens,” Samuels plays Grace Gardner, a girl she says serves as “the eyes and ears of the audience.” In other words, she’s the sane, relatable one. “We’re both very earnest, very loyal, very studious girls who are about friendships, sisterhood and doing the right thing. We’re also girls who want to seek out normal college experiences.” Samuels herself is a junior marketing and intellectual property major at Stanford, where, like Grace, she’s in a sorority. “I had no idea what it was all about,” she says of pledging. “I mean, it’s pretty mellow, I have great friends there, it’s nothing like Kappa Kappa Tau, but thankfully I don’t think anything is….But, I can’t speak for fraternities.”