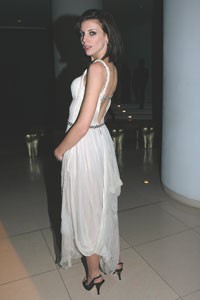 SAN FRANCISCO — All eyes were on Vanessa Getty at the San Francisco Ballet opening night gala, and it wasn’t just the va-va-voom pale lemon silk vintage Halston column dress she was wearing or her diamond chandelier earrings. Instead it was her “modeling” turn in the new Judith Lieber ads, so fashion savvy balletomanes were checking out the sparkling crystal cheetah-patterned Lieber minaudière she clutched.

“What’s in your bag?” queried Alexis Swanson, as Getty snapped it open to reveal her cell phone.

“I’ve got to check up on my kids,” Getty explained.

But it was Mexico that was the real hot topic of the night last week. Getty was heading down to the One&Only Palmilla resort in Los Cabos the following day with her family, while O.J. Shansby and her husband, Gary, just bought a cliff-top house in superluxe Costa Careyes.

Across the pond, London’s party set opted for a poetry night, of sorts. Burns Night, which marks the birthday of Scotland’s most famous poet Robert Burns, is usually a major event on every Scot’s January calendar — but then there are always exceptions.

“I’m ashamed to say I’ve only been to two Burns Night dinners in my life,” said the Glasgow-born Kelly Macdonald at a dinner to fete the 18th century poet at Saint Martin’s Lane hotel last Wednesday.

Dougie Payne, of the Scottish band Travis, made up for his wife Macdonald’s shortcomings in a matching olive green tweed kilt and jacket. “I’m going for the lord-of-the-manor look. I’m just looking for a fireplace to pose against.”