When it comes to parties, there are at least two things European designers are good for: celebrities and cigarettes. 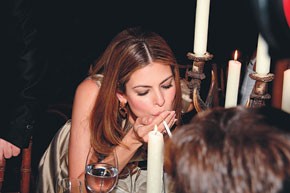 When it comes to parties, there are at least two things European designers are good for: celebrities and cigarettes. Both were in hefty supply Tuesday night when Domenico Dolce and Stefano Gabbana invited 200 of their most fabulous friends to the rooftop of New York’s Gramercy Park Hotel for a dinner celebrating the reopening of their Madison Avenue boutique.

Well, calling it a dinner might be somewhat of an exaggeration. Some guests weren’t served their meal until nearly 11:30 p.m., and a few didn’t bother waiting around for it. Really, the night was more about ogling: most of the crowd simply hovered around the star-packed center table, where Eva Mendes chain-smoked off the silver and glass candelabras while Rosario Dawson and Anne Hathaway engaged in some serious girl-talk.

Space was so tight on the packed terrace that it’s a wonder Kate Hudson in a micro-micromini was able to make it through the night without any wardrobe malfunctions. “It all seems to be staying in place,” she sighed with relief.

Across the roof, hockey star Sean Avery held court with Charlotte Ronson and Allison Sarofim; Julia Restoin-Roitfeld, Tatiana Santo Domingo, Lauren Davis and Barbara Bush were seated at the next table, while Alex Kramer had eyes only for Dan Baker. Emily Mortimer and husband Alessandro Nivola arrived late, and hungry, having caught “Rock ‘n’ Roll” on Broadway earlier. By one o’clock, Natasha Richardson, Hathaway and Dawson had called it a night but Hudson showed no signs of waning, sipping Patron with old friend Matthew McConaughey.

Meanwhile, Tara Subkoff was looking for a cigarette and eyed her pal Hudson’s nearly empty pack of American Spirits. But she thought better of it. “I’m not going to take Kate Hudson’s last cigarette.”

That same night in Miami, Cartier, MOCA and Interview magazine cohosted a dinner in anticipation of Art Basel which kicks off today. “Miami becomes like no other place in the world this week,” said Calvin Klein, who recently purchased a Miami residence. “It’s like Rio, but in the U.S.”

Back in New York on Monday night, Chanel Beauté sponsored a Cinema Society screening of “Atonement.” The film, based on the Ian McEwan novel, is about the heart-wrenching consequences of a tragic lie. So what’s the worst fib the film’s stars ever told? “I’m certainly not going to share that with you!” exclaimed a horrified Keira Knightley (translation: It must have been a doozy). Her romantic co-lead, James McAvoy, was more forthcoming: “I once told my younger sister I was dead. I convinced her I was my own ghost.”