After working alongside Prince, John Mayer, No I.D., and more, the 31-year-old singer/songwriter from Sweden gains her own footing.

Snoh Aalegra never felt at home anywhere in the world until she moved to Los Angeles.

The 31-year-old Swedish singer/songwriter is of Iranian descent, and when she was growing up, bullies at school would tell her to go back to where she came from. But she came from Sweden — more specifically, a small town called Enkoping, then an idyllic suburb named Uppsala, and finally, she and her family moved to the crisp air and minimalist architecture of Stockholm. Her parents fled Iran before she was born because of the oppressive regime there. She’d been to Iran twice in her life, and the last time she visited was when she was seven. The rest of her Iranian family eventually immigrated to Sweden. So, who were these kids telling her to go back to somewhere she didn’t even consider a hometown, anyway? She didn’t connect with the quiet, almost mute temperament of her Scandinavian classmates. She had dreams. Aalegra wanted to make music.

It would be great, perfect actually, if Aalegra could say she came to L.A. in pursuit of her musical career and finally found home in the long, wide streets of Hollywood. But the truth is, she moved in 2017, and she experienced serious culture shock. She realized she had to be more than just her music, and fell into a crowd of fake friends who latched onto her for clout. She didn’t like L.A. when she first arrived. But then she cut the toxic people and started to explore the lay of the land for herself. Meanwhile, she was working on the follow-up to her debut album “Feels,” an emotional and raw record containing a genre of music she calls “cinematic soul.” She started bringing in collaborators she respected, revered, even, to contribute to “Ugh, Those Feels Again,” her new record that drops today. They surrounded her with positive energy. Aalegra started to have fun.

“It wasn’t really L.A. itself that made me realize home isn’t physical,” Aalegra says. At this moment, she’s sitting in an office in Midtown Manhattan with a straight back, her neck elongated. She folds her hands, one over the other. “I realized home is wherever you’re surrounded by positive people who love and support you.” 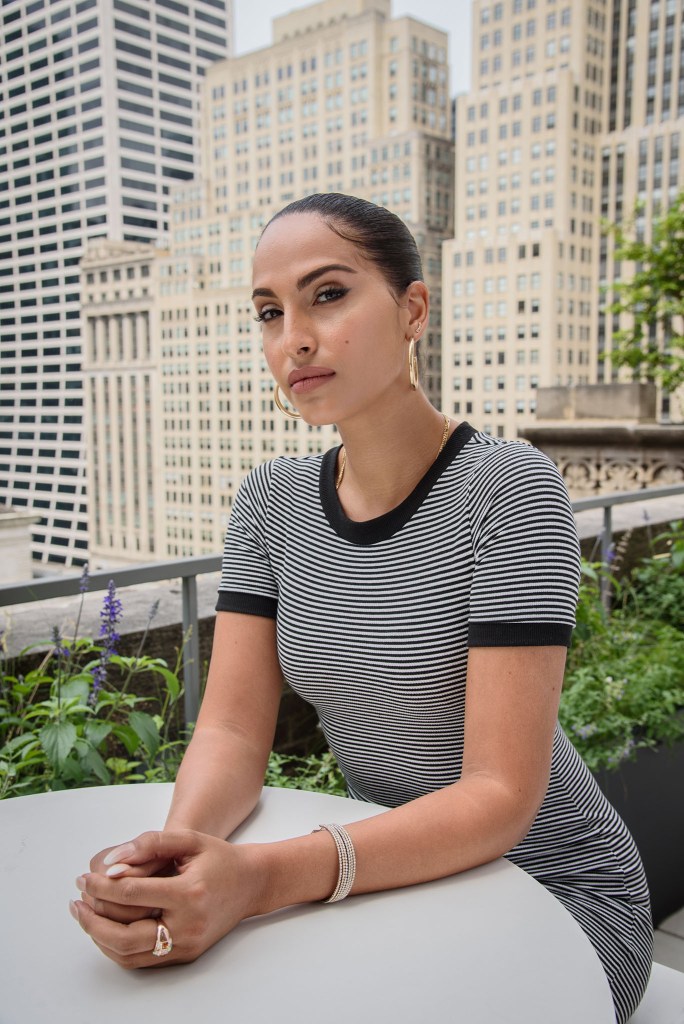 While working on “Ugh, Those Feels Again,” Aalegra spent one day on one song, wearing different hats in the studio, editing her own vocals, doing some production. She’d head to the studio around 2 or 3 p.m., because she doesn’t do those crazy, late-night, 4 a.m. sessions like she used to. She just can’t anymore. Aalegra keeps saying she’s different now, she’s different now. It’s a refrain that exemplifies the place she’s at in her life at this very moment.

“I feel more open and a bit more free than before. [Making music is] not so serious and painful,” Aalegra says. “I have a more healthy approach to creating. Although it’s my personal life and all that, I’ve learned to take a little bit of a distance from the whole thing. Emotionally, I’ve always worn my heart on my sleeve. In the past, it was hard for me to get certain feelings out. Now, the actual process has been more light to my heart. I think about everything that I’ve been through while I’m making a song. It can be really hard, but I’ve still been having real fun. I’ve been laughing my ass off, every session.”

Critics often discuss the idea of the second record being either a blessing or a curse. It can be difficult for an artist to follow up a successful record with an equally or more successful one, which highlights a different snapshot of the artist’s life and shows growth and improvement. Even though Aalegra felt some of these jitters early on in the process, she said she eventually waved them away and focused on the work.

“I felt a bit of pressure in the beginning, but I let that go really quickly,” she says. “I really don’t think too much. I just make music that I love. I’m kind of selfish when I make music. I’m like, ‘Do I like this?’ I’m not trying to please anyone anymore, I think that’s the difference. I’ve let go of trying to please people.”

Before “Feels” dropped in 2017, she recorded an LP called “Don’t Explain.” At that time, she was being mentored by Prince before he passed away, and working with the likes of John Mayer and the producer No I.D. Drake sampled her song “Time” on his 2017 album “More Life.” Plus, critics were calling her the next Amy Winehouse for her deep, sultry voice. Her associations with other artists have long existed in her career, and Aalegra says that’s a nod to her skill, not a detriment to her goals as an independent artist.

“It’s a compliment to be grouped in with any of these other artists,” she explains. “It doesn’t take away from me being an artist. As long as I don’t have to compromise my art, that’s the most important thing. It doesn’t matter if I’m famous or not, it’s all about the music.”

My new album is now up for PRE-ORDER/PRE-SAVE (Link in bio) ❤️❤️❤️ Also new song ’Situationship’ now available on all platforms!! ✨

Before she departs for more press duties, Aalegra discusses a cultural mentality which exists in Sweden. It’s called the law of Jante, or Jantelagen. The idea is that Swedes do not think they’re better than anyone. They don’t flex, they don’t compete, aren’t supposed to speak loudly. Aalegra, simply put, does not observe Jantelagen. When she was young, she’d tell her classmates of her ambitions to make music, wanting to leave Enkoping and Uppsala for a bigger city. People would say things like, “Who do you think you are?” Now, she sees this uniqueness as an asset.

“I’m blessed to have two — three, including American — cultures, which are so rich,” she says. “It makes me vibrant and different.”

With that, she leaves. In a couple days, she’ll return to Los Angeles, her home.

While Critics Argue About Saweetie, the Rapper Seeks a Signature Sound