On Tuesday, a handful of socials visited Christie's for a preview of the house's spring jewelry and contemporary art sale and a luncheon in honor of Derek Lam. 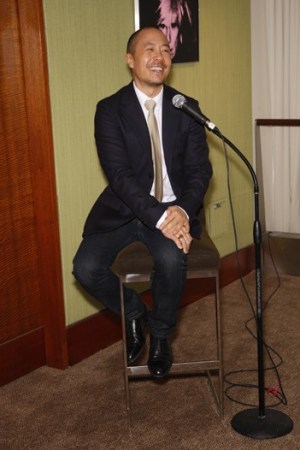 On Tuesday, a handful of socials visited Christie’s for a preview of the house’s spring jewelry and contemporary art sale and a luncheon in honor of Derek Lam. Coralie Charriol Paul arrived looking svelte in skin tight pants, despite having given birth five weeks earlier to a daughter, Anaïs. “I’ve had cabin fever,” she said.

While models wearing Lam’s fall collection traipsed among the tables, guests seemed conflicted about the appealing food in front of them. “Does the waistline come with the dress?” one asked before picking at her Cobb salad.

In London on Tuesday night, Lindy Guinness, also known as the Marchioness of Dufferin and Ava, attracted quite a crowd to the opening night of her exhibition, “A Painted Diary,” at Mayfair’s Browse & Darby gallery. Rosita Marlborough, Claüs von Bulow, Jung Chang, Nicky Haslam, and Lady Leonora Lichfield admired Guinness’ oil paintings, many of which depict scenes from her sprawling Northern Ireland estate, Clandeboye. “She captures the instant of an emotion — which is what art is all about,” said fellow artist Marlborough, who is planning an exhibition of her own in the next couple years.

Appropriately, trays bearing glasses of Guinness were delivered to the tiny space from an Irish pub across the road. “I think I’ll have another one,” said Guinness as she escorted guests through the show.

Whether people were flush with cash or alcohol, the gallery sold over half of the works that night.