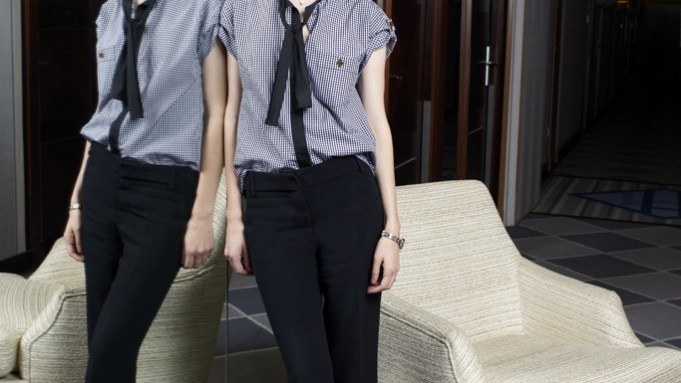 Sofia Coppola’s personal style is the antithesis of bling. Sitting in the Mouton Cadet-sponsored lounge on the roof of the Palais des Festivals on day two of the Cannes Film Festival, the director is the picture of understatement in a short-sleeve blouse and pants from the Louis Vuitton cruise collection. At her side sits a small navy version of the SC handbag she designed for the brand.

So it’s something of a surprise that her new film focuses on a gang of teenagers who gained fame for robbing luxury items from the homes of Hollywood celebrities. “The Bling Ring” is based on the real-life tale of the teenage criminals who targeted stars including Paris Hilton, Lindsay Lohan and Orlando Bloom from 2008 to 2009. The movie screened out of competition at the festival and will open in the U.S. on June 14.

“It’s such a great story for a movie,” says Coppola. “It fascinated me. It felt so contemporary and said so much about our culture today.”

Coppola got the idea after reading a Vanity Fair feature on the gang, written by Nancy Jo Sales and headlined “The Suspects Wore Louboutins.”

Though it’s the first time she has written a script based on a true story, the result holds to Coppola’s penchant for lush visuals and great soundtracks. It also features the most mouth-watering array of fashion props since the “Sex and the City” films.

That brands like Vuitton and Chanel allowed her to borrow items for the film, despite its contentious material, is a tribute to her strong links to the fashion industry (Coppola interned at Chanel at the age of 15 before briefly having her own clothing line, Milkfed).

“I think it’s not the ideal way they want to be portrayed. Louis Vuitton is this brand based on heritage and great craftsmanship, and that wasn’t the side that we were celebrating,” Coppola acknowledges.

“They wanted to be associated with my work, and they trusted me and helped me. There’s a side that I appreciate about Louis Vuitton and Chanel, that they have this heritage and great quality, but the kids in the story are more interested in the bling aspect, kind of the status of those brands,” she adds.

Amping up the realism of the movie, Coppola filmed in the actual home of Hilton, which features a private club room complete with stripper pole and personal touches like cushions emblazoned with the socialite’s likeness.

“That was really her house, and we didn’t art-direct it. She really has the club room, the pillows and all of that. But she has a sense of humor about that. She said a friend gave them to her and she thought it was funny, so she kept them, so she’s playful about her image,” Coppola says.

The director relied on a cast of mostly unknown youngsters to play the five teens who are seen shoveling their bags full of designer clothes and accessories in their spiraling obsession with celebrity Web sites and red-carpet style. The exception is Emma Watson, who is set to shed her image as Hermione Granger in the “Harry Potter” franchise with her entertaining portrayal of Nicki, the character based on Alexis Neiers, the ring member who went on to star in her own reality TV show, “Pretty Wild.”

“She was very thoughtful about how to approach it and took it seriously and really studied hard to get the accent — that specific Calabasas accent. If you were from California, you would recognize it. And also I think it’s always fun to see an actor totally transform themselves, and it’s so different from how I thought of her before,” Coppola says.

When it came to editing the film, she opted to splice in tabloid television clips, Facebook updates and screen grabs of celebrity blogs, alongside cell phone “selfies” and security camera footage.

“It had a little more of a collage kind of style, where we tried to show images from these kind of pop culture Web sites that they’re looking at all the time, and have it feel like the audience can be experiencing what they’re experiencing, so that was new to me. It was a challenge to do something based on a real story and how to approach that in my style,” Coppola says.

Though her vision is frequently ironic, the director refrains from judging her characters. The minimalist script draws on transcripts of the interviews Sales conducted with members on the gang, as well as their subsequent media appearances.

“I really think they’re a product of our culture,” Coppola says.

“There’s a lot of humor in the story, and a lot of the quotes and the moments are kind of so absurd that it’s hard to believe they’re real. I couldn’t have made that up. They sound kind of over-the-top, but I tried to make them human and tried to show that they’re caught up in this world that has a funny side, but they’ve just taken it too far,” she says.